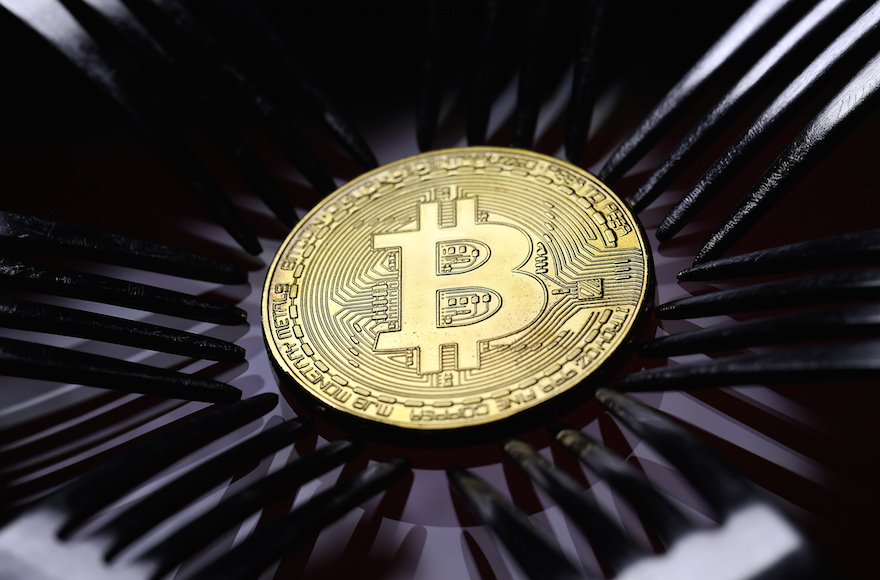 TEL AVIV (JTA) — Israelis lined up Tuesday afternoon at the newly opened bitcoin exchange in this city to purchase the coveted cryptocurrency.

Amid the store’s yellow signage, the customers one by one inserted bank cards into a towering ATM-like machine. Sharply dressed young employees helped them make the necessary online maneuvers to claim their new funds.

Guy Maimon, a goateed 22-year-old, sat at a desk in the corner of the Bitcoin Change store buying cryptocurrencies from foreign markets in a desperate effort to keep the kiosk stocked. He said every day was like this, with hundreds of customers coming in a week. The company has had to limit individual purchases to 5,000 shekels, or about $1,400 a day.

“The demand is crazy,” Maimon said as he toggled between tabs on his laptop and worked his leg muscles with an exercise band. “A lot of people return every day and buy the maximum. When we run out and turn off the machine, people sit here and wait for us to turn it back on.”

Interest in cryptocurrencies has surged not just in Israel, where banks make them hard to buy from exchanges, but around the world. As of Wednesday, a single bitcoin, the most popular digital currency, was worth $16,000 compared to just $1,000 at the beginning of the year and $10 in 2013.

But as with any bubble, fraudsters have begun to take advantage of a cryptocurrency bonanza with a variety of nefarious schemes. According to fraud experts, Israel is shaping up to be a hub for cryptocurrency swindling.

It has happened before. Over the past decade, more than 100 “binary options” companies set up shop in Israel, forming the core of a global industry offering dubious all-or-nothing bets on various assets. The companies bilked people worldwide out of billions of dollars. In August, Israel Police Superintendent Gabi Biton told a Knesset panel that the industry was run by — and provided “massive enrichment” to — Israeli crime bosses.

As the result of dogged reporting by The Times of Israel, the Knesset in October banned binary options companies from operating in the country. And in the first half of the year, deposits fell 78 percent, according to an industry benchmark. However, the Knesset bill that covered various types of financial fraud was narrowed to apply only to binary options, raising concerns that fake binary options companies will simply switch to another product and continue to operate.

Shortly after the passage of the law, Israel Securities Authority Chairman Shmuel Hausner told The Times of Israel that he was “very troubled” by the possibility that binary options cheats would turn cryptocurrencies into the next big scam.

“We don’t want this to become the next mutation of binary options or a haven for fraudsters,” he said.

Echoing Biton, Hausner expressed confidence that the law could be extended to binary options scammers who sell other products. But he said schemes not covered by securities laws could fall outside his jurisdiction and under that of the police.

Austin Smith, the founder of Wealth Recovery International, a Tel Aviv startup that helps victims of binary options fraud reclaim their money, warned that the worst fears of the authorities are coming to pass. He said the same factors that earn Israel the “startup nation” moniker also make it a breeding ground for fraudsters: its small size, innovation and technology, seize-the-day mentality and diverse immigrant population that can market in myriad languages.

Based on his company’s investigations, which have included sending moles into the offices of scammers, Smith has concluded that Israel is seeing an industrywide shift into cryptocurrency. 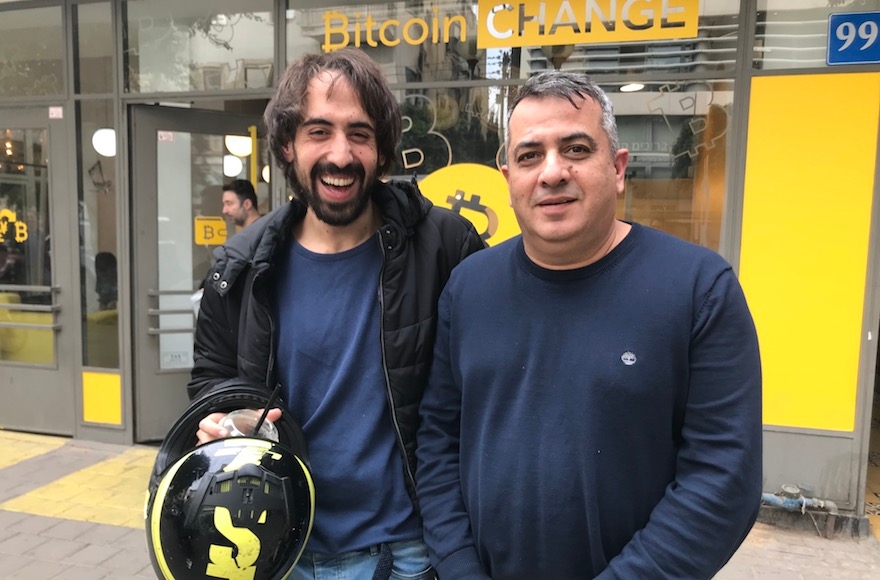 Guy Maimon posing with his father outside the Tel Aviv bitcoin exchange where he just bought his first cryptocurrency, Dec. 19, 2017. (Andrew Tobin)

“More or less every binary options company we know of now has a cryptocurrency platform as well,” he said. “I’m already getting calls from victims, but most people have yet to even realize they’ve been defrauded.”

Smith said the cryptocurrency scams involve not only securities, but also initial coin offerings and futures. In each case, the fraudsters offer a bogus product in exchange for cryptocurrency and simply pocket much or all of the investment. Conveniently for criminals, who were among the first adopters of the technology, cryptocurrency’s encryption and decentralized control system makes it nearly impossible to track.

“These guys would have to be stupid not to make the switch,” he said. “And they’re not stupid.”

VanDesande explained that small states like Israel generally lack the resources of world powers like the United States to do effective financial oversight and “understandably” tend not to prioritize cases that do not involve their own citizens. He said there are also incentives not to look too hard. Fraudulent industries are often major economic drivers, he noted, and that can translate into political clout.

“From my perspective as a former senior investigator, when there’s so much money flowing into country, you would probably take a wild guess that it’s going into campaign contributions,” he said. “Maybe that’s why it took so long for binary options to be shut down in your country.”

Corruption in high places has been at the center of the national conversation in recent months. With Prime Minister Benjamin Netanyahu the subject of two police probes, thousands of Israelis have taken to the streets of Tel Aviv the past three Saturdays to protest government corruption and the so-called recommendations bill, which would prevent police from publicizing recommendations on indictments.

Speaking at the most recent rally, Eliad Shraga, the founder and chairman of the Movement for Quality Government in Israel, warned that Israel is becoming a “mafia” state. He adapted his speech in an English language blog post published Tuesday by The Times of Israel.

“These past few weeks have taught us that we are not speaking of a specific event, but about a foul tsunami rising up in an ocean of corruption that threatens to drown the state of Israel,” he wrote. “This is organized crime; crime families and Israeli mafia who are gaining control of local government and from there gradually taking over the central government and the nerve centers of Israeli society.”

For it’s part, Bitcoin Exchange says its operation is entirely aboveboard and only makes money on commissions. Maimon, the cryptocurrency buyer, affirmed this was true. But he added that he was already making plans for the day after the cryptocurrency bubble bursts, including starting college in the fall.

“I’m not investing in bitcoin,” he said. “I’m pretty sure it’s going to blow up.”