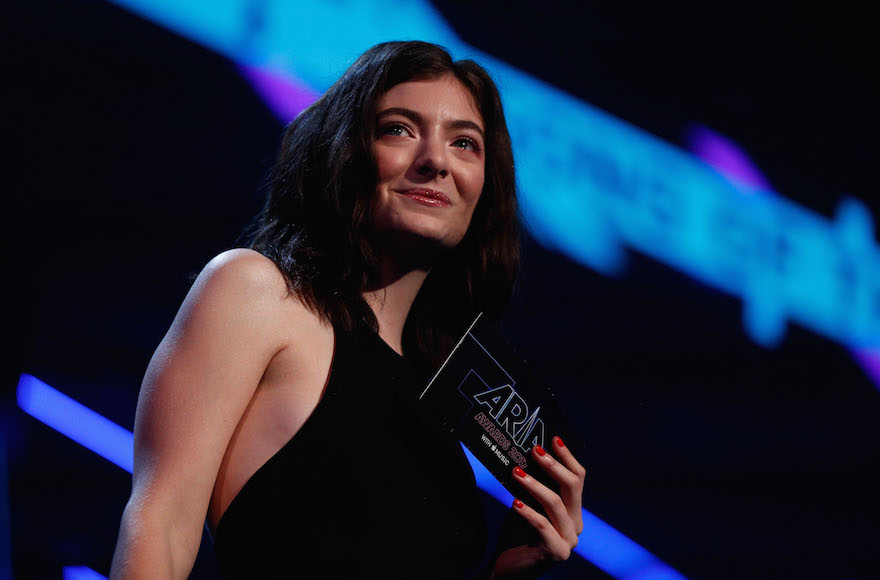 Lorde presenting an award during the 31st Annual ARIA Awards 2017 at The Star in Sydney, Australia, Nov. 28, 2017. (Zak Kaczmarek/Getty Images for ARIA)
Advertisement

(JTA) — Pop star Lorde said in an statement it is the “right decision at this time” to  cancel  a summer concert in Israel.

The singer, 21, said that she educated herself about Israel before booking the June concert announced a week ago but that “I didn’t make the right call on this one.”

In a statement distributed on social media and by her booking agency, Lorde wrote: “i’ve received an overwhelming number of messages and letters and have had a lot of discussions with people holding many views, and i think the right decision at this time is to cancel the show. i pride myself on being an informed young citizen, and i had done a lot of reading and sought a lot of opinions before deciding to book a show in tel aviv, but I’m not too proud to admit i didn’t make the right call on this one. tel aviv, it’s been a dream of mine to visit this beautiful part of the world for many years, and i’m truly sorry to reverse my commitment to come play for you. i hope one day we can all dance. L x”

Israel’s Culture Minister Miri Regev urged Lorde to reconsider her decision in a statement issued Sunday night after Israeli news reports that the concert would be cancelled.

“Lorde, I expect you to be a ‘pure heroine’ like the title of your first album. A pure heroine of culture, void of any foreign political considerations, not to mention delusional ones,” Regev said.

The New Zealand Jewish Council responded to the cancellation by its local music icon.

“We are deeply disappointed that Lorde has succumbed to a small but loud group of extremist bullies. Boycotts of Israel will not lead to peace. Those who advocate them are not interested in negotiations between the two sides to this conflict or a two-state solution,” spokesperson for the Council, Juliet Moses, said.

“By cancelling her show, Lorde has sided with those who support the isolation and demonization of the one Jewish state in the world. She has ignored the moderate voices, including the vast majority of Jewish Kiwis, who believe in dialogue and co-existence, and the leading musicians like Radiohead, Nick Cave, Guns N Roses and Justin Bieber who have performed in Tel Aviv in the last year. She will still be performing in Russia, but no one accuses her of complicity with Putin, the occupation of the Crimea or chemical warfare in Syria,” Moses also said.

Producer Eran Arieli in a post Sunday night on Facebook apologized to fans and said: “I was naive to think an artist of her age could handle that pressure.”

He added: “It’s important to me that the end of the day we will thank her for considering us and giving us the opportunity in the first place, and also apologize to her, she doesn’t deserve all the shit she’s been through in the last week since the announcement. The last thing she needs on her comeback tour is the army of globalist anti-Semites weighing down on her head.”

Following her announcement of a Tel Aviv concert date in June on Monday, New Zealanders Nadia Abu-Shanab and Justine Sachs — the former Palestinian and the latter Jewish — wrote an open letter on Thursday on the website The Spinoff saying that Lorde’s scheduled performance in Israel “sends the wrong message.”

Sachs, who is a fan of Lorde, on Monday told the Hebrew-language Walla news website that she was surprised at the success of her campaign.