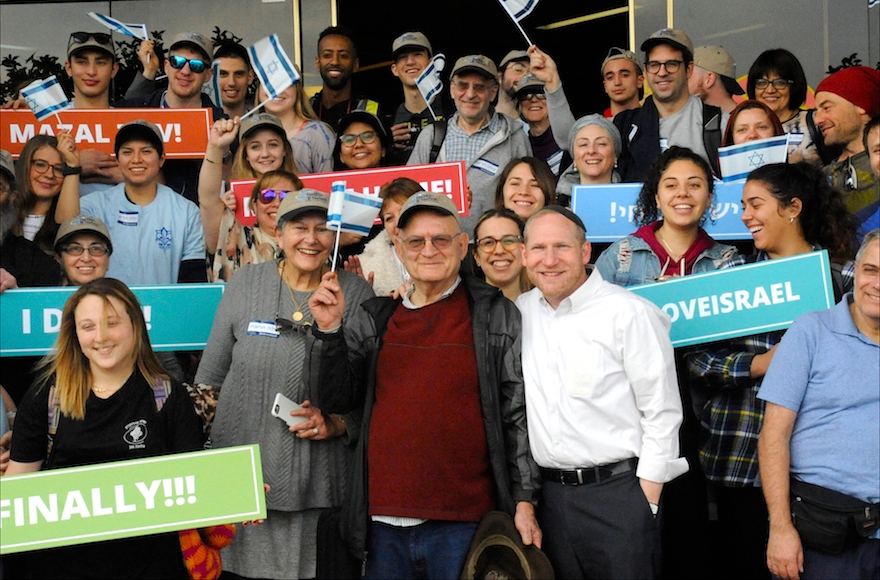 TEL AVIV — As a group of well-wishers waved tiny Israeli flags and shouted “Welcome home,” Diane Hewitt of Hoboken, New Jersey, stepped off the El Al jet that had just flown her to Tel Aviv from New York, cradling her 8-year-old blind beagle, Annie, in her arms.

A retired jewelry industry executive, Hewitt, 65, had always dreamed of moving to Israel, but she didn’t want to leave behind her daughter, Sarah. But after Sarah herself immigrated to Israel a year ago and married an Israeli, there was little to keep Hewitt in her city across from Manhattan.

“I came to Israel for the first time in 2014, got off the plane and fell in love,” Hewitt said as she petted Annie, who had accompanied her as an ESA, or emotional support animal (Hewitt has Parkinson’s disease). “You feel at home, and everybody is family. It’s a feeling like no other.”

Hewitt arrived at Ben-Gurion International Airport on Dec. 27 along with 92 other new immigrants aboard the last of 19 Nefesh B’Nefesh “aliyah flights” in 2017. The specially designated flights brought the total number of immigrants to Israel from the United States and Canada to 3,633 for the year. Overall, about 29,000 immigrants from around the world arrived in Israel in ’17.

The last year has seen a noticeable shift in the types of immigrants coming to Israel from North America, according to Rabbi Yehoshua Fass, co-founder and executive director of Nefesh B’Nefesh. The nonprofit organization works with Israel’s Ministry of Aliyah and Integration, The Jewish Agency for Israel, Keren Kayemeth LeIsrael (KKL) and JNF-USA to facilitate Jewish immigration to Israel from the United States, Canada and Great Britain.

Over the last year, there has been a rise in the number of single, non-Orthodox young adults moving to Tel Aviv, Fass said. About 65 percent of Americans and Canadians immigrating to Israel as families consider themselves Orthodox, while approximately 60 percent of single olim are non-Orthodox, he noted. 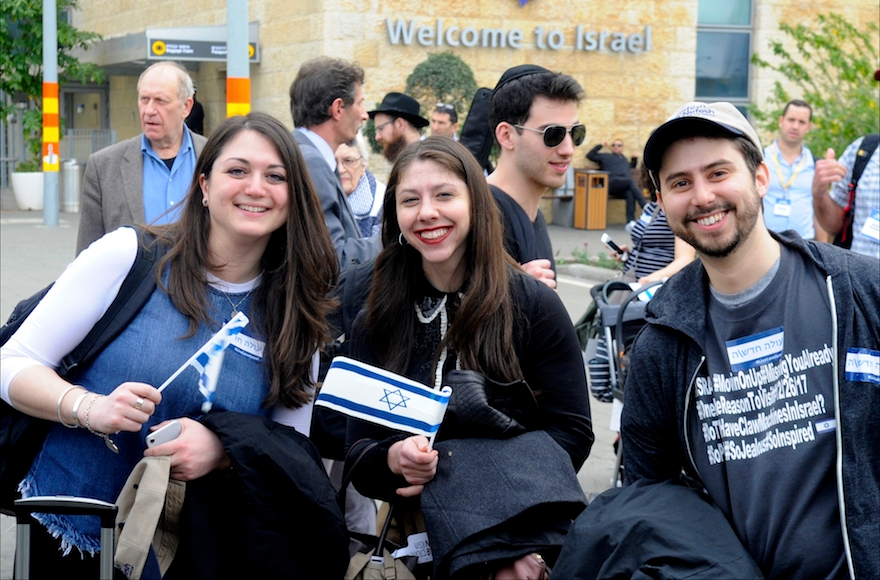 Most immigrants move to locales with strong English-speaking communities, such as Jerusalem, Tel Aviv, Modiin, Beit Shemesh and Raanana. But a growing number are finding homes elsewhere.

In 2017, Nefesh B’Nefesh launched “Go Beyond,” an initiative organized in partnership with KKL to encourage new immigrants to settle in Israel’s less densely populated northern and southern regions. Hundreds answered the call.

Then there were those who, like Betsy and Michel Messeca of Albuquerque, New Mexico, hail from places not known for having large Jewish communities.

Betsy, 72, is a fifth-generation New Mexican whose German Jewish ancestors settled in the Southwest in the 1860s. Michel, 76, was born in Cairo, left Egypt in 1957 and moved to France. The couple met in Paris. Upon retirement, they moved to Albuquerque. Then, in the waning days of 2017, they picked up once more and moved to Raanana.

The year’s last aliyah flight also included Aviya Johnson, a 40-year-old African-American school nurse from Oakland, California. A longtime member of Congregation B’nai Israel in nearby Vallejo, Johnson said she decided to make aliyah with her daughter, Shmira, because “in America, there are so many things that hinder us as Jews, so many barriers wrapped around our daily lives.”

Johnson plans to live in Karmiel, a northern town. Among the other popular destinations in northern Israel in 2017 were Safed, Zichron Yaakov and Tiberias. The top choices for those settling in the south were Beersheba, Ashkelon, Eilat, Ofakim and Mitzpe Ramon.

“We want to make sure individuals in the Diaspora know there are options and real opportunities in areas that they might not have explored,” Fass said. He noted that smaller towns in northern and southern Israel are “far more affordable than Tel Aviv or Jerusalem.”

Since its founding in 2002, Nefesh B’Nefesh has brought nearly 55,000 people to Israel from the United States, Canada and the United Kingdom.

“I had a lifelong dream to become a citizen of Israel,” Phyllis Zur said. “It’s taken me until now, at age 72, to realize it.”

“I believe Israel is the insurance policy of the Jewish people,” she added while waiting for her luggage. “I want to be an example to my grandchildren.”

(This article was sponsored by and produced in partnership with Nefesh B’Nefesh, which in cooperation with Israel’s Ministry of Aliyah, The Jewish Agency, KKL and JNF-USA is minimizing the professional, logistical and social obstacles of aliyah, and has brought over 50,000 olim from North America and the United Kingdom in the past 15 years. This article was produced by JTA’s native content team.)