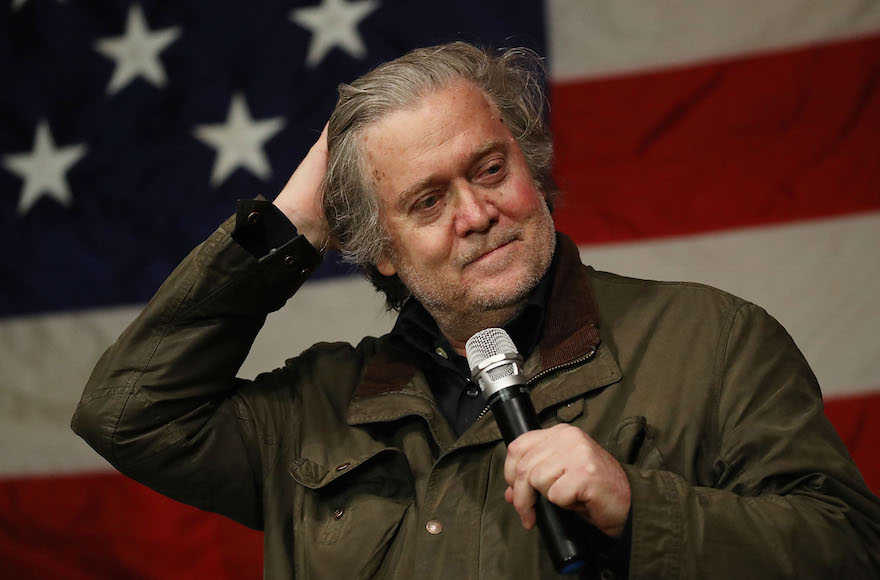 Breitbart News in a statement said Bannon is a “valued part of our legacy,” but various media, including The New York Times, said he was ousted because of a falling-out with Trump over quotes he gave to the author of an incendiary book about the Trump White House.

Bannon, calling himself an “economic nationalist,” helmed Breitbart after the sudden death of its founder, Andrew Breitbart, in 2012, and again after he left the White House in August. Under his watch, Breitbart News was seen as strongly pro-Israel, with a dedicated Jerusalem bureau. Bannon was also said to have urged Trump to move the U.S. Embassy to Jerusalem and to refuse to meet with Palestinian Authority President Mahmoud Abbas. Breitbart’s Jewish employees said he made sure they were able to observe Shabbat and Jewish holidays.

Yet he was also portrayed by Jewish liberals as inimical to Jewish interests. Joining Trump’s presidential campaign in its last three months, he introduced terms like “globalists” and theories of international banking conspiracies that often recalled anti-Semitic propaganda, although neither Bannon nor Trump explicitly named a Jewish conspiracy.

Bannon called Breitbart a “platform” for the “alt-right,” a loosely organized nationalistic movement whose followers include white supremacists and anti-Semites, but he also told reporters that he rejected both and was confident they would “wash out” of the movement.

He battled with Kushner and Ivanka Trump at the White House, calling Kushner, who is Jewish, a “globalist.”

His departure from the White House in August was prompted by an interview in which he was critical of Trump’s foreign policy. However, he was already in a precarious position because he was believed to have encouraged Trump’s equivocal response to a white supremacist march in Charlottesville, Virginia, on Aug. 12 that turned deadly when one of the marchers allegedly rammed a crowd of counterprotesters with his car, killing one and injuring 20. Trump said there were good people on “both sides” of the incident, earning widespread opprobrium.

When he left the White House, Bannon said he wielded more power at Breitbart, to which he returned. The outlet reaches millions of voters on the right who reject what they say are the biases of the mainstream media and are seen as responsible for the defeat of establishment Republicans in some primaries.

Bannon then backed a far-right candidate, Roy Moore, in a special Senate election in Alabama. Moore thoroughly bested Trump’s favored candidate, Luther Strange, in the primary, but Moore was then beset by allegations that he had pursued and in two cases assaulted teenage girls when he was in his 30s.

Bannon stuck by Moore and persuaded Trump to endorse him as well. Moore lost the race to a Democrat, Doug Jones, in a state that for decades has been staunchly Republican. Trump was furious that he was tainted by Moore’s loss.

The president was enraged again when passages from Wolff’s book were released, saying that Bannon had “lost his mind.”

According to The Times, influential conservative political donor Rebekah Mercer, who has a minority stake in Breitbart, led the effort to push out Bannon.