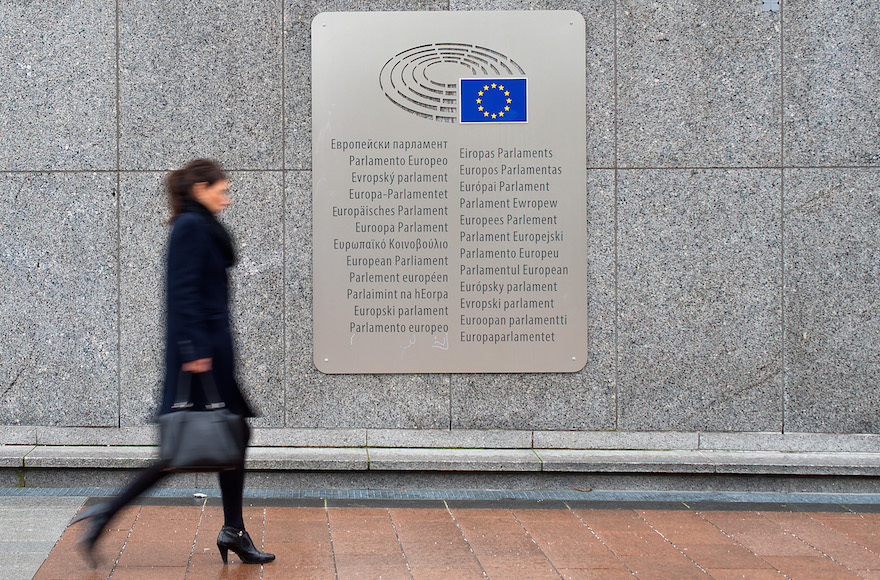 A woman walking past a European Parliament placard outside the Espace Leopold in Brussels, Belgium, Feb. 25, 2016. (Ben Pruchnie/Getty Images)
Advertisement

Jewish groups and Israeli politicians had criticized the European Union’s parliament for hosting Alaeddin Boroujerdi, who chairs the Committee for Foreign Policy and National Security of Iran’s parliament, and his delegation for a two-day visit to the parliament in Brussels.

“I’m from Germany,” said McAllister. “The media reported that the suspects are accused of spying on possible Israeli and/or Jewish terror attack targets, including Jewish kindergartens. This would be highly disturbing.“

Daniel Schwammenthal, director of the American Jewish Committee’s Transatlantic Institute, praised parliament members for their questions for the Iranians.

“Mr. McAllister and several of his colleagues who also harshly criticized the regime – in particular on its threats to Israel, support for terrorism, and Holocaust denial – conveyed the crucial message to Tehran that the European Union will not tolerate the regime’s nefarious and criminal behavior,” Schwammenthal said. “All too often, EU leaders fail to do just that – to publicly confront Iran. Predictably, this has only served to embolden Iran’s aggression.”

Boroujerdi repeatedly failed to answer questions about the alleged Iranian terror plots in Germany and Holocaust denial. He did, however, tell the European Parliament that “we (Iran) do not accept the Zionist regime,” according to the AJC.

On Wednesday, Boroujerdi is scheduled to participate in a seminar about bilateral Iran-EU relations.

In a letter to the president of the European Parliament prior to the Iranian delegation’s visit, the Anti-Defamation League called the invitation to a senior member of the Iranian regime to speak in Brussels  troubling, given his history of promoting terrorism and past participation in a conference in Tehran in 2014 promoting Holocaust deniers.

The ADL’s national director, Jonathan Greenblatt, said that i nviting Boroujerdi was a way to “legitimize him as someone whose views are worthy of consideration.”