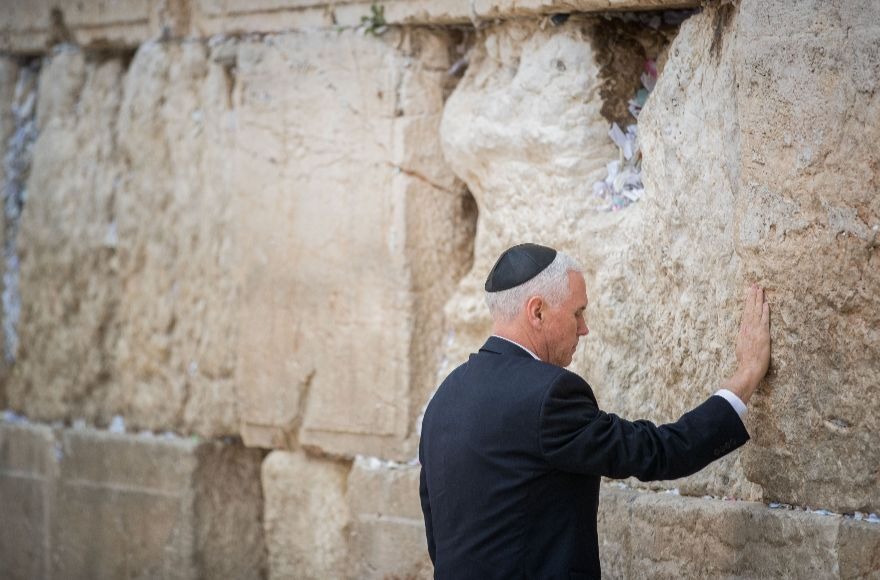 JERUSALEM (JTA) — Vice President Mike Pence made what was billed as a private visit to the Western Wall.

Pence and his wife, Karen, spent about 10 minutes at the Jewish holy site on Tuesday, the last stop on the Israel leg of the vice president’s Middle East trip. They were not accompanied by any Israeli officials or politicians in keeping with the visit’s designation as private, like President Donald Trump in May. The rabbi of the Western Wall, Shmuel Rabinowitz, met the Pences and gave them a short explanation about the site and its place in Jewish history.

They each approached and prayed at the wall — the vice president in the men’s section and his wife in the women’s section.

David Friedman, the U.S. ambassador to Israel, and Jason Greenblatt, the U.S. Mideast envoy, accompanied Pence to the site.

“A privilege to pray at the Western Wall,” he said in a tweet. “This is our 4th trip to the Holy Land, but Karen & I never fail to leave without a sense our faith has been renewed – our faith in God, but also our faith in the people of Israel & their commitment to freedom, security & peace.”

A privilege to pray at the Western Wall. This is our 4th trip to the Holy Land, but Karen & I never fail to leave without a sense our faith has been renewed – our faith in God, but also our faith in the people of Israel & their commitment to freedom, security & peace. #VPinIsrael pic.twitter.com/DbujemM0fO

Female journalists were separated from their male counterparts behind a barrier at the site, which they said they were not informed of in advance and  prevented them from doing their jobs. The women used the hashtag #PenceFence on social media to describe the incident.

Earlier Monday, Pence visited Yad Vashem accompanied by Prime Minister Benjamin Netanyahu, where he laid a wreath to the Jews killed in the Holocaust in the Hall of Remembrance and visited some of the displays inside the museum.

That morning, Pence met with President Reuven Rivlin at his residence in Jerusalem. Rivlin showed Pence photos in his office of Hadar Goldin and Oron Shaul, Israeli soldiers whose bodies are being held hostage in Gaza by Hamas. The leaders spoke of the duty to bring them home for proper burial, as well as three other Israeli citizens who are being held captive by the terrorist group.

Speaking to reporters, Rivlin thanked Pence for his speech in the Knesset the previous day in which he called Jerusalem “the capital of the State of Israel”and noting the “unwavering commitment” of the United States to Israel.

“You are very proud, always, to stand very firm behind your words in actions, and for that we have only one word to describe you — you are a mensch,” the Israeli president said.