There is a life-size statue of Woody Allen in Spain. Women’s groups want it taken down. 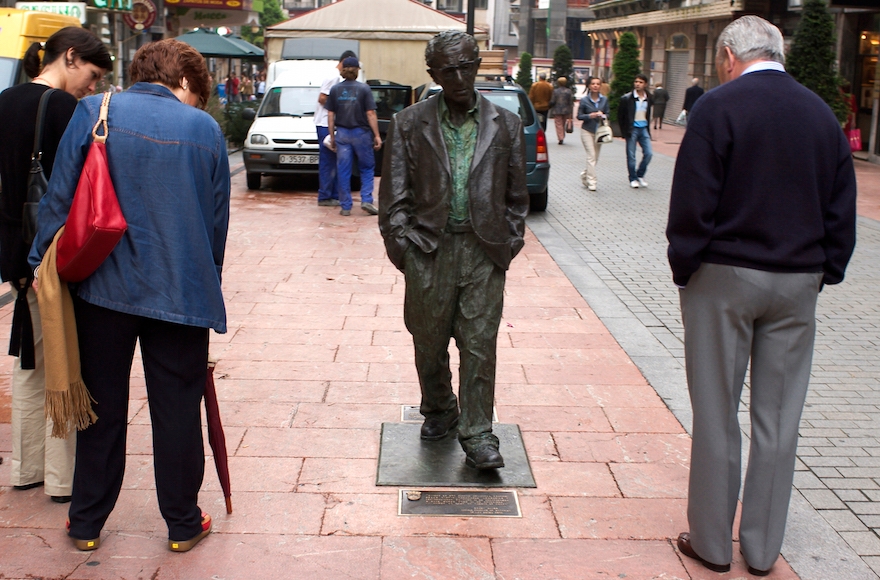 (JTA) — Women’s groups in Spain are calling on a city there to remove a life-size statue of Woody Allen.

The groups have called on lawmakers in Oviedo to remove the popular tourist attraction on Calle Milicias Nacionales Street, a shopping area, over renewed sexual molestation allegations by the famed director’s adopted daughter, Dylan Farrow.

The bronze statue by Spanish sculptor Santarúa was erected in 2003 after Allen visited the northern city, a setting for his 2008 film “Vicky Cristina Barcelona,” to receive the prestigious Prince of Asturias Award. Allen has returned to Oviedo to take photographs with the statue, according to the Washington Post.

The Asturias Feminist Organization in a letter to the Oviedo City Council said the statue serves “to honor an abuser and pervert,” The Local-Spain reported. The request reportedly will be discussed at a future council meeting.

Allen has denied that he ever molested his adopted daughter, and an investigation determined that Farrow was coached to make the accusation, which she denies. In an interview last week, Farrow recounted the 1992 incident, which allegedly took place when she was 7 years old. She said she was inspired to come forward by other women who have told their stories in recent months.

Several stars have recently repudiated Allen or donated their earnings from his films to organizations that support women who have been sexually abused or marginalized.