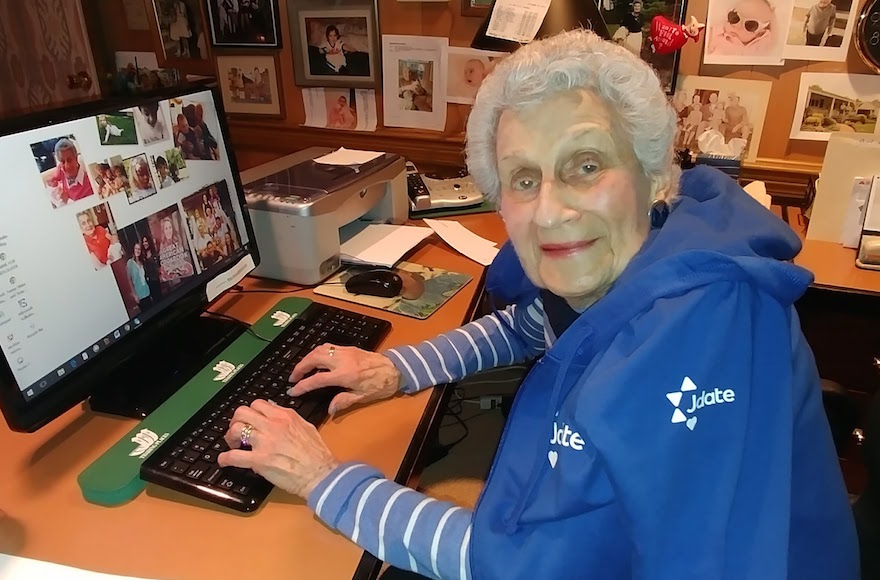 Bea Slater is a 90-year-old social media maven who is now the face of a JDate ad campaign. (Elaine Durbach)
Advertisement

WHIPPANY, N.J. (New Jersey Jewish News via JTA) — If Bea Slater had ever been a shrinking violet, her sudden celebrity might be uncomfortable. At 90, the great-grandmother has her image plastered on billboards and bus shelters up and down Manhattan and in Brooklyn. There’s even one on the roof above Junior’s, the famous cheesecake place.

Along with three other women nearly as old as she, she has become the face of JDate, the Jewish matchmaking site. They’re not poster girls for senior dating. Rather, JDate is promoting their images to suggest that it is “yentas” like them who are working out the site’s algorithms to find that perfect match. One ad, featuring Slater hard at work on a laptop, reads “Her dreidel game is filthy. But her code is clean.” (Translation: She’s a great dreidel player, and even better at writing computer code.)

The “Powered by Yentas” concept came from copywriter and standup comedian David Roth, who produced the campaign with Hogarth Worldwide for JDate’s parent company, Spark Networks SE. Roth said grandmothers have labored forever to ensure that young Jews meet and procreate in order to sustain the tribe.

“Bea was an instant star,” he said. “She has one of the most expressive and comedic faces I’ve ever seen. We had an embarrassment of riches — so many funny photos of Bea to choose from. She was hilarious on set and an absolute delight to work with.” 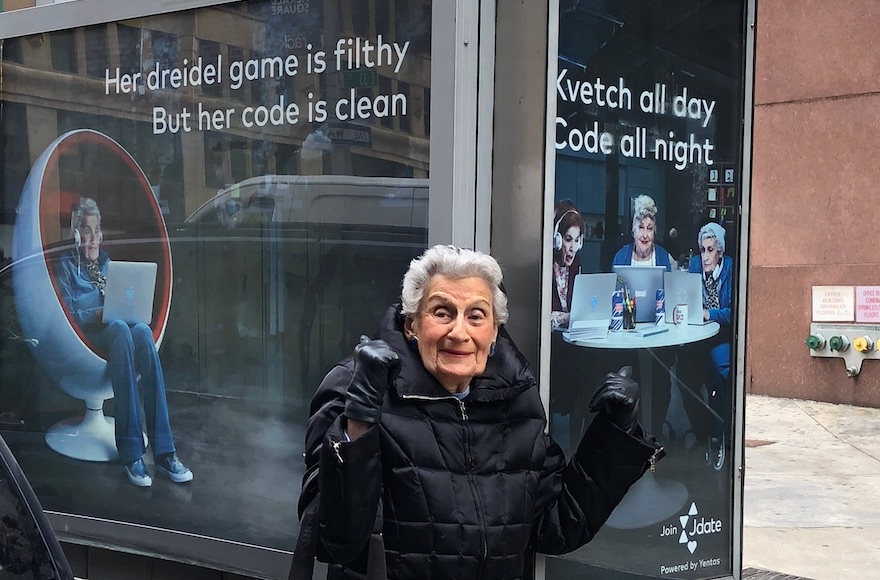 Bea Slater posing in front of some of the ads in which she is featured. (Courtesy of Mitch Slater)

Slater, not a coder though a savvy computer-literate social media user, is taking her celebrity status in stride, loving every aspect and eager for more. Chatting in her home in Springfield, New Jersey, where she has lived for 65 years, she talked more readily about her family (two sons, Mitch and Jeff Slater; a daughter, Diane Bedrin; four grandchildren; and six great-grandchildren), but was content to answer questions about how she is enjoying her newfound fame.

“When my picture is up in the subway, then I’ll really be a star,” she said.

Though she has never modeled professionally — and the last time she did any acting was in eighth grade — posing came easily. Slater, who grew up in West Philadelphia, was a much-pictured daughter of a photographer. She became a photographer herself when she grew up, at least until she turned her focus to raising her kids. Almost every wall in her home is adorned with family photos, assembled and collaged by her father and, after he passed away, by her husband Jack, who died in 2009.

In November, a friend mentioned to her son Mitch that JDate was trying to find older women for a marketing campaign. He told his older brother, Jeff, a marketing executive, who initially dismissed the idea, sure their mom wouldn’t be up for it. But the younger brother, a financial adviser, called back Jeff within minutes to let him know that not only did he decide to broach the subject with their mother, but Bea had agreed on the spot.

“I said, ‘You never know …’” — which happens to be her response to virtually every question. 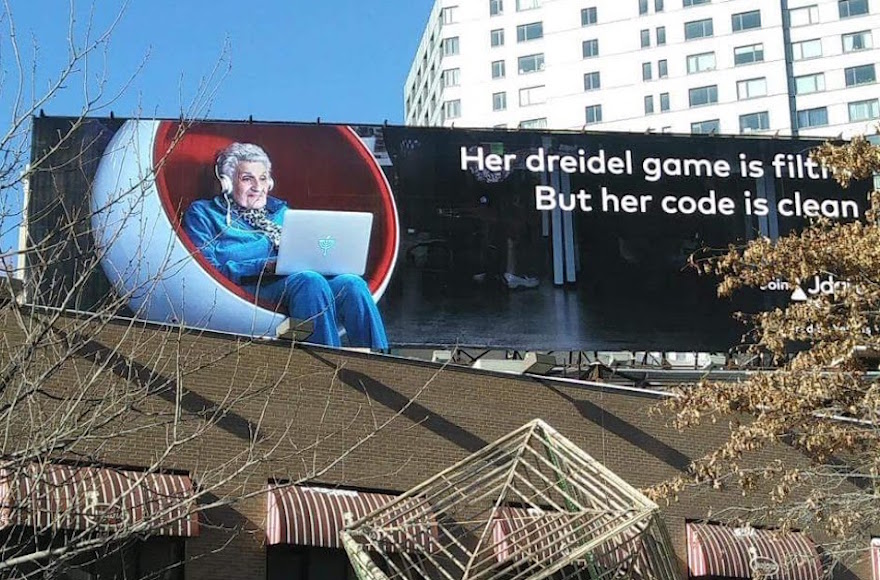 It’s a principle she applies to herself as well as those around her. A few years ago, Slater persuaded her granddaughter Fanny Slater to enter TV personality and celebrity cook Rachael Ray’s “Great American Cookbook Competition.” Slater was in the audience when Fanny was named the winner, and in February, both grandmother and granddaughter will appear on “The Best Thing I Ever Ate,” a show on the Cooking Channel.

A few months ago Mitch, who has a wide circle of friends in showbiz, including Bruce Springsteen and his cohort, arranged for his mother to introduce Steve Van Zandt (of the Boss’s E Street Band) and his band, Little Steven and the Disciples of Soul, at a concert on Staten Island. She admitted to being nervous standing alone in the spotlight (with the protective Mitch hovering nearby).

“I didn’t want to disappoint Steve,” she recalled. Later, to her astonishment, Slater was mobbed by fans who wanted to take selfies with her.

Slater was chosen by the Donna Grossman Casting Agency. Speaking for Grossman and her team, Paul Bernstein said they auditioned approximately 40 women, though many more applied. They were looking for “authentic Jewish grandmothers in their late 80s to 90s,” Bernstein said, and Slater and her co-stars stood out because of “their heart, their humor, style. They all had their own chutzpah and heimishe feel.”

The photographs for JDate were taken by Randal Ford, a sought-after commercial photographer.

Some 60 years ago, Slater and her husband helped co-found their synagogue, Temple Shaarey Shalom, the Reform congregation near her home. It was a big part of their and their children’s lives. Going on without Jack was a challenge, Bea acknowledged, and many of her friends are gone, too, or not as youthful as she is. Still, she attends the temple’s Renaissance Club, drives (though not at night) and keeps up an active social life. And now she’s auditioning for other advertising campaigns. Bea Slater’s son Mitch convinced her to audition for the campaign. (Elaine Durbach)

Asked what Jack would make of her celebrity, Slater laughed.

“He’d have said, ‘Do you know what you’re getting yourself into?’ He was much more conservative than me,” she said.

As for using JDate herself, she is adamant that she has “absolutely no interest in meeting anyone. I’d never find anyone as good as what I had.”

But like so many Jewish grandmothers, Slater is eager to help others find love.

“There should be more money next time, though,” she added, with exactly the kind of twinkle in her eyes that got her the JDate gig in the first place.