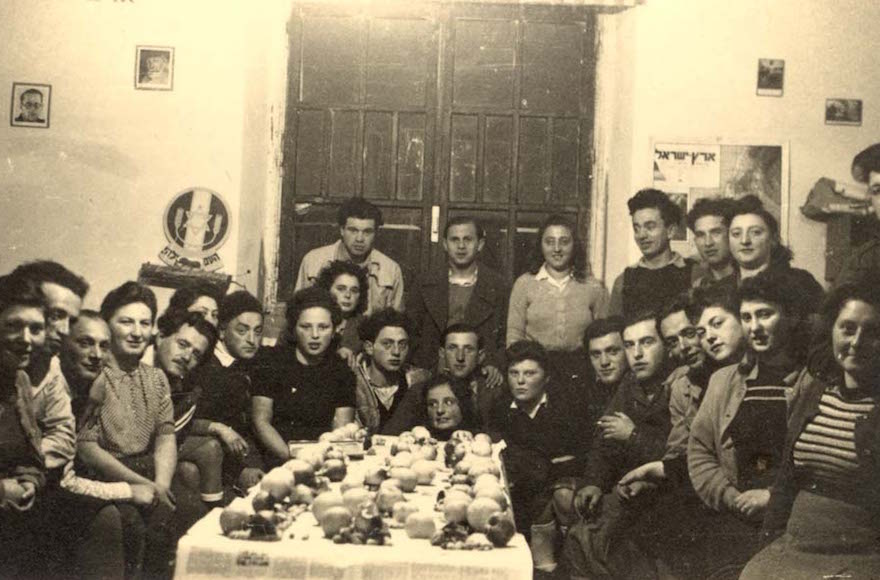 In an undated photo from the Yad Vashem Archives, Algerian Jews are shown celebrating Passover. (Courtesy of Yad Vashem)
Advertisement

NEW YORK (JTA) — Nearly 80 years after being persecuted by the Nazi-allied Vichy French government, some 25,000 elderly Algerian Jews are being recognized for the first time as Holocaust survivors by the German government.

Algerian Jews had their French citizenship stripped in 1940 by the Vichy government, which then ruled the area. Nuremberg-like laws banned Jews from working as doctors, lawyers, teachers and in government. Children were kicked out of French schools.

On Tuesday, 78 years after they endured suffering that left families penniless and starving, and pariahs in their own country, the Conference on Material Claims Against Germany will begin taking their applications for recognition as survivors, making each eligible for a one-time “hardship grant” and additional services like food vouchers and in-home care.

“For the first time they’re being recognized as Nazi victims by the German government,” said Greg Schneider, executive vice president of the Conference on Material Claims Against Germany. It is the last settlement Germany will make with a large group of Holocaust survivors, he added, since it was the only major population remaining without that recognition.

Each survivor approved will receive a hardship grant of 2,556 euros, the equivalent of approximately $3,100. The euro figure is the equivalent of 5,000 Deutschmarks, a sum the Claims Conference negotiated with the German government in 1980. The money will be distributed beginning in July.

The youngest Algerian survivors, born in 1942, would today be 76 years old. Most, however, are in their 80s and 90s, Schneider said. As important as the money is, even more valuable is acknowledgment of their suffering, he told JTA in an interview from Paris, where he was getting the Help Center set up.

“They weren’t murdered,” Schneider said, “but there were lots of deprivations” under the anti-Semitic Vichy laws.

“There weren’t extermination camps in Algeria, but a person’s childhood was turned upside down because of this persecution targeting Jews. It becomes a huge part of a person’s identity. The experience during the war for so many people defines them, is the seminal experience of their lives. All these decades it’s never been acknowledged.”

Israel had earlier recognized Algerian Jews as Holocaust survivors. But the German government did not, and not being acknowledged as survivors has “undermined their core sense of self, especially when they see all the other groups getting recognized,” Schneider said.”

“It’s a psychological trauma. The validation and acknowledgment, for so many people that’s what this will stand for.”

The Claims Conference has negotiated with the German government for about five years to get this done, Schneider told JTA. Being recognized as victims of the Holocaust now entitles survivors to social services like home care, food and transportation to doctor appointments in local communities funded through the Claims Conference. 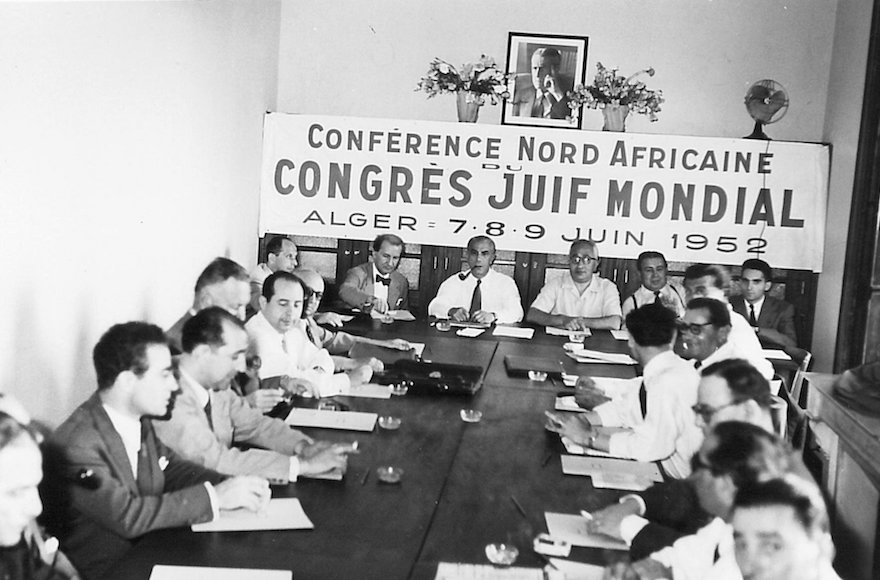 The vast majority of people affected — about 20,000 — now live in France. On Monday morning, the Claims Conference opens a website where survivors can make an appointment to go to a Help Center. The first Claim Help Center opens in Paris on Tuesday morning.

Located across the street from the U.S. Embassy, just a block from the Seine in the 8th Arrondissement, the center in the French capital will have a staff of 24 to assist the Paris area’s 12,000 Algerian survivors in assembling the documentation they need in order to establish that they lived there between 1940 and 1942.

Satellite centers to serve another 8,000 Jews will soon open in Marseille, Lyon and other French cities in the next few weeks. The Paris center will be open through April. After that, people will be able to apply by downloading a form from the website and mailing it in.

Some 4,000 surviving Algerian Jews live in Israel. Since the Israeli government keeps a registry of survivors, their addresses were available to the Claims Conference. Letters to them were mailed out on Sunday.

The rest of the survivors live in Francophone Canada, mostly around Montreal, according to the Claims Conference. Eventually they, too, will get assistance in applying for the new German recognition.

The German government has spent nearly 75 billion euros, about $93 billion, on compensation and restitution to Holocaust survivors between 1953 and 2016, the most recent year for which there is a record, according to figures provided by Martin Chaudhuri, a spokesman for the German Finance Ministry.

“There is now the possibility of compensation in the framework of the so-called Hardship Funds. The JCC [Jewish Claims Conference] and the German Federal Ministry of Finance estimate that around 30,000 people might be concerned,” he wrote to JTA. “The JCC will decide about the individual cases, considering the guidelines which were decided upon together between the JCC and the German Federal Ministry of Finance.”

Today almost no Jews remain in Algeria — fewer than 50, according to the Jewish Virtual Library.

But in 1940 it was a different story. A Vichy government census showed about 118,000 Jews there, according to Wesley Fisher, the Claims Conference’s director of research. They had been citizens of France since 1870. It was a community full of professionals and artists and writers.

The Algerian Jewish community was the most assimilated of any Muslim country, said Haim Saadoun, a professor at Israel’s Open University and director of The Documentation Center of North African Jewry During WWII. Though they were generally less religious than Jews in neighboring Morocco and Tunisia, there were still hundreds of synagogues in hundreds of cities, towns and villages. 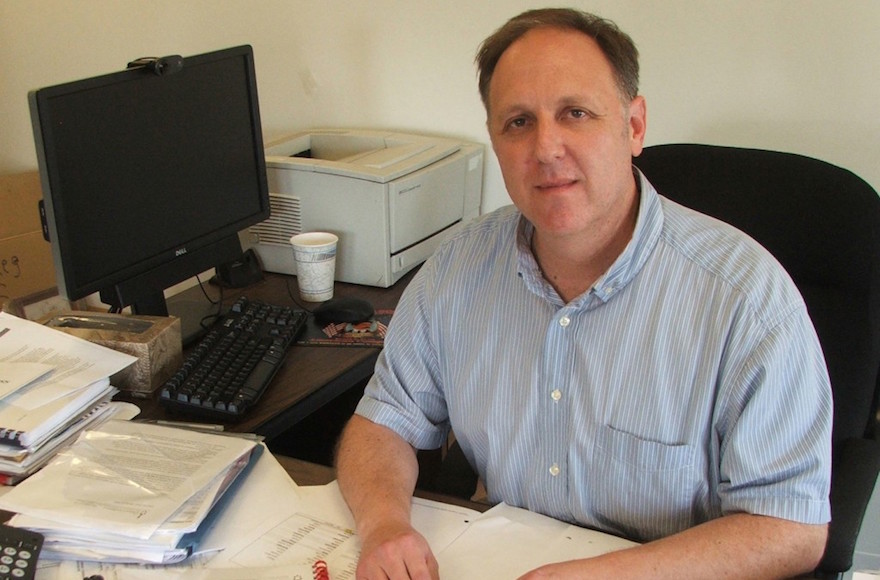 Greg Schneider, the executive vice president of the Claims Conference, said the recognition was important for the “historical record.” (Uriel Heilman/JTA)

Anti-Semitism had been a strong force in Algeria since the late 19th century. It was far worse even than in France during the Dreyfus Affair, said Saadoun.

Despite that, Jewish life was vibrant. Jews, he said in an interview, “were part of all the political life, the artistic life, in music, they were very involved in French and in Muslim society. The first local novels written in French were by Jews.”

Saadoun said over one-third of doctors in Algeria were Jewish, as were nearly one-quarter of the lawyers.

Vichy anti-Jewish laws, issued first in early October 1940, stripped Jews of French citizenship and forbade them from working in army, press, civil service, industrial and commercial jobs. They were then prohibited from working in education, law and medicine.

It was deeply traumatic, said Saadoun. The community did not know then that it would last just two years. Jews opened their own schools in Algiers, Oran and Constantine: 70 elementary schools and five secondary schools, he said, which were run by Jewish administrators but regulated by the Vichy government, which did not permit the Jewish community to open its own university.

The Claims Conference has tried to keep this story under wraps until now, in part to make sure a system was in place to pay claimants directly without them having to pay attorney’s fees.

“On a communal level, we are unfortunately reaching the time when the stories of the Shoah pass from memory to history,” Schneider told JTA. “Germany recognizing the persecution is very important for the historical record. It helps combat Holocaust denial. Fifty years from now, 100 years from now, it will be much harder to refute.

“In the 1930s and ’40s, Jews were abandoned by their towns, their friends, society and even the Jewish communities” in other places, he said. “We will never do that again.

“Even though it’s 70 years later, we’re still fighting. I wish it had been sooner.”