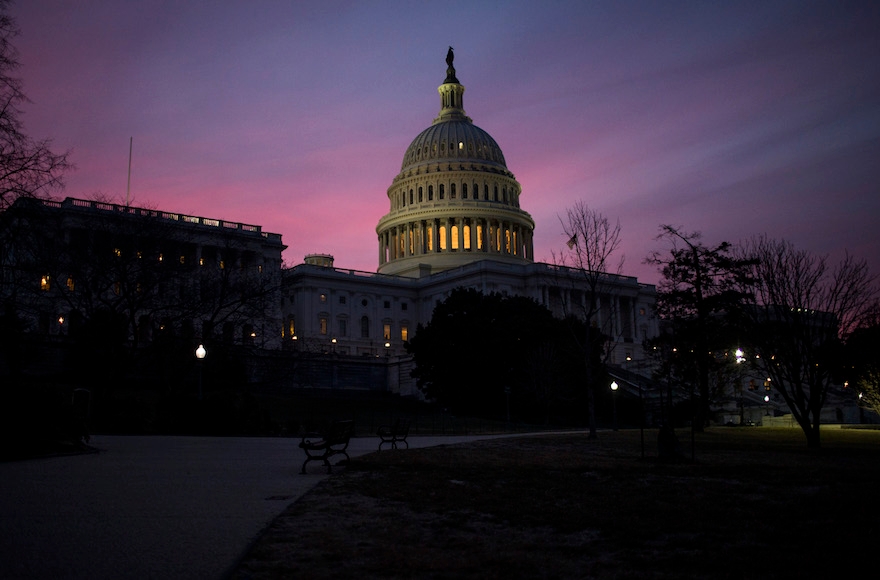 (JTA) — Jews in and around the nation’s capital do plenty of Jewish things. Many of them just don’t do those things as members of Jewish institutions.

That’s one of the main takeaways from a wide-ranging survey of Washington, D.C.-area Jews published this week by the Jewish Federation of Greater Washington. Much of the metro D.C. Jewish community travels to Israel and follows the news there. Its members may take part in services and observe key Jewish cultural rituals more than the national average. And its young people attend Jewish cultural events.

But fewer than average D.C.-area Jews belong to synagogue. And only a fraction say Judaism is a part of their daily life.

“There’s a lot more program participation and synagogue attendance than there is membership in synagogues and institutions,” said lead author Janet Krasner Aronson. “One way to view that is that the community offers a lot of ways for people to participate without membership. Another way is that the institutions have not kept up with what people are looking for.”

Conducted by the Steinhardt Social Research Institute, commissioned by the Morningstar Foundation and supported by the Jewish Federation of Greater Washington, the survey of more than 6,000 took place from May to August of 2017. Aronson’s co-authors are Len Saxe, Matthew Brookner and Matthew Boxer.

Here are five of its biggest takeaways.

That number makes it one of the six largest Jewish communities in the country, around the same size as the Bay Area’s Jewish population (350,000, according to a new study) and Chicagoland (also close to 300,000). The Jewish communities in Southeast Florida and Los Angeles regions both number about half a million people, according to data in the Bay Area study, while the New York City area’s is roughly three times that size, at 1.5 million.

But D.C. can count on staying power. Although D.C. might have a reputation as a magnet for 20-somethings in short-term government and research jobs, 60 percent of Jews have lived in the area for more than 10 years. And only 22 percent of all Jews have any plans to leave the area.

(Local Jews were surprised to learn that more Jews are now to be found in Northern Virginia, 41 percent, than suburban Maryland,  37 percent, or the District, 22 percent.)

D.C. Jews are more Democratic than American Jews in general

Americans Jews have a longstanding reputation for voting Democratic. Around 70 percent of Jews voted for President Barack Obama in 2012 and Hillary Clinton in 2016 — the highest numbers among any religious group. In September, 77 percent of Jews said they disapproved of President Donald Trump’s job performance. Fifty-four percent of Jews identify as Democrats nationally, while 14 percent nationwide are Republicans.

But Jews in the D.C. area are even more Democratic than that. Seventy-two percent of area Jews identify as Democrats, while only six percent identify as Republicans. The remaining 22 percent are either independent or affiliate with another party. The most Democratic sectors of the Jewish population are 18 to 29 year olds and those older than 65.

In general, the capital is perhaps the most Democratic city in the country. In 2016, more than 90 percent of local voters voted for Clinton.

The paradox of the D.C. communal study, according to the researchers and Gil Preuss, the CEO of the local Jewish federation, is that while Jews in the area observe rituals and go to Jewish programs at relatively high rates, they’re also relatively unaffiliated with traditional Jewish institutions.

D.C.-area Jews observe Jewish religious rituals at higher rates than Jews nationwide — though the numbers are not always directly comparable. More than half of D.C.-area Jews attended High Holiday services, and 20 percent attend a service at least monthly, while the equivalent numbers nationwide were about 35 and 20 percent, according to the Pew Research Center’s 2013 study of American Jews.

But Jews in the D.C. area also affiliate at lower rates than American Jews overall. Nearly 40 percent of D.C. Jews are unaffiliated, compared to 30 percent nationally. Just 27 percent say Judaism is part of their daily lives.

While 31 percent of Jews nationally belong to a synagogue, the number is slightly lower in the D.C. area, at 26 percent. And within that number, a fifth belong to an independent prayer group or Chabad. A lower percentage of D.C. Jews give their kids formal Jewish education than do Jews nationwide.

Most of them have been to Israel

In one area, the Jews in and around D.C. stick out — Israel. Two-thirds have visited the Jewish state, compared with 43 percent of Jews nationally. A similarly higher number has gone on Birthright’s free 10-day trips to the country.

Beyond that, more than two-fifths of Jews in and around D.C. follow Israel news at least once a week. A slightly higher percentage of D.C.-area Jews “very much” have an emotional connection to Israel than the equivalent number nationwide — 34 percent vs. 30 — though a slightly higher percentage in the D.C. area also says it has no emotional connection — 14 percent vs. 10 nationally.

On the peace process, D.C. Jews lean to the left. Two-thirds support a two-state solution to the Israeli-Palestinian conflict, while only nine percent oppose the idea. Two-thirds also believe either some (44 percent) or all Israeli West Bank settlements should be dismantled.

Young Jews in the area are also staying involved in Judaism. While the researchers noted that these figures may be slightly high, the study reports that a majority have gone to at least one Jewish program this year. That includes a whopping 41 percent who have attended a program at Sixth and I, a historic synagogue and program center in the capital.

“We have the opportunity to present programming, to engage them, to really connect them to each other and to Jewish life,” said Preuss. “Because they’re searching. They’ve already made the statement that they care. The question now is how creative, how open are we, and what do we do?”