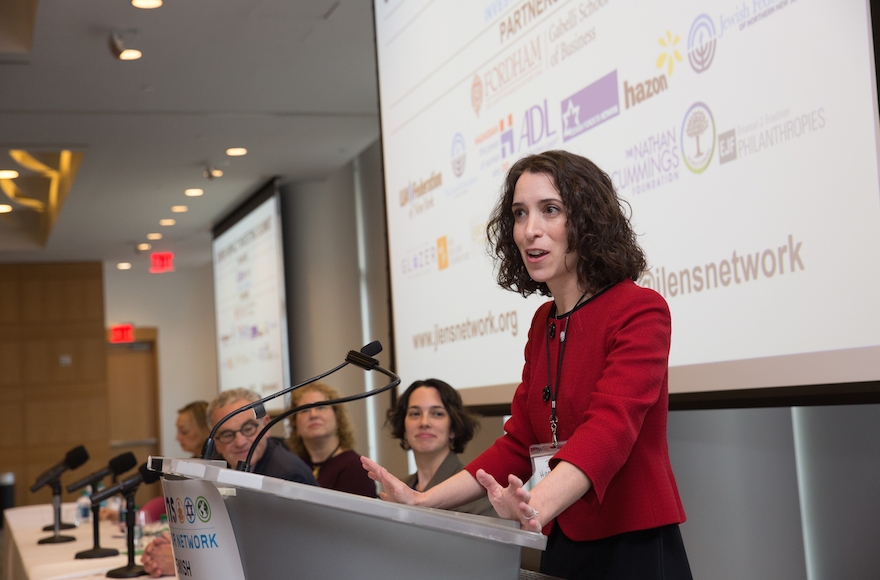 Julie Hammerman, who founded the JLens Investor Network, at the group's conference on impact investing in 2017. (Courtesy of JLens)
Advertisement

NEW YORK (JTA) — For all of its modern history, the American Jewish community has pursued most of its goals through philanthropy — funding programs and institutions through donations and charitable giving that relies heavily on the generosity of wealthy people.

But what if the community could achieve those same goals and also make money?

A growing number of activists are promoting a Jewish take on impact investing, which means investing in businesses that also promote a social good. Advocates say investments like these — in anything from a solar energy company to a business employing disadvantaged Israelis — are more sustainable and can go further than just donating to charity.

“Business, finance, investments and economics are such powerful forces in the world, and they can be channeled for good or for evil,” said Julie Hammerman, a former Wall Street analyst who founded the JLens Investor Network, which promotes Jewish impact investing, in 2012.

“They’re really powerful arenas, and we have so many social and environmental challenges,” she said. “If we can use market solutions to fill in that gap, we’re in a better position.”

Hammerman is among a few people pushing for a fundamental shift in how the Jewish community thinks about funding and maintaining ventures that advance Jewish values. They all stress that impact investing is meant to complement philanthropy, not replace it. But they say that socially conscious investments can achieve two goals: applying Jewish values to how people spend their money, and promoting Judaism through programs that make money rather than lose it.

“How do we invest in companies that are actively thinking about their environmental footprint, how they treat their employees, what their government structures are?” asked Avi Deutsch, who with Vanessa Bartram co-founded Lavan, an organization that promotes impact investing within the Jewish community. “Financial decisions are moral decisions, and they have an impact on our world, on our society, on our planet.”

Religious impact investing, says Hammerman, first became popular among Christians who would avoid so-called “sin stocks,” or companies involved in gambling, alcohol, tobacco, pornography or firearms. Activists who push firms to divest from Israel, she adds, also are practicing a form of impact investing — though one many Jews oppose. 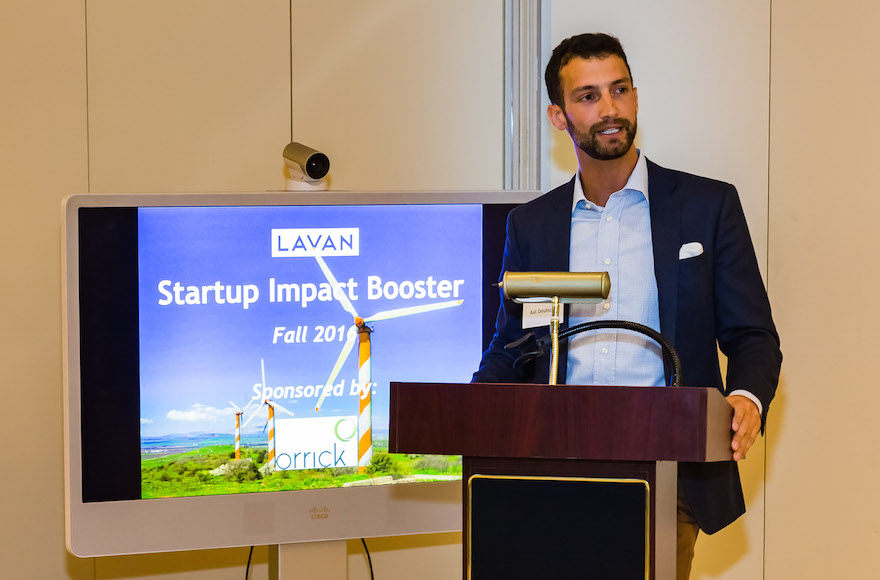 Avi Deutsch, who co-founded Lavan, says Jewish values should apply as much to investing as to the rest of life. (Courtesy of Lavan)

The Jewish Community Foundation of San Diego offers an Impact Investment Pool, created in partnership with JLens, for donors who put their charity money in donor-advised funds at the foundation. New York’s UJA-Federation runs loan-guarantee funds in Israel for disadvantaged populations, among other initiatives. San Francisco’s Jewish Community Federation is exploring starting a fund that would offer low-interest loans to capital campaigns at Jewish institutions.

“Impact investment doesn’t replace giving money,” said Sue Reinhold, the San Francisco federation’s managing director for philanthropy. “There’s all this money already put aside for philanthropy, and while it’s being stored, how can you put it to good use?”

There are a range of ways to make impact investments. Foundations and people can  invest in groups of public companies that abide by their values. Investors can also put their money in smaller companies whose purpose is advancing a social good — say, raising grass-fed beef. Or people can invest in “social impact bonds” — bonds that pay out when a certain goal is achieved, like creating a certain number of jobs in a depressed area.

Jewish impact investing advocates want Jewish charities — like local federations or family foundations — to consider putting some of their endowments in impact investing rather than traditional investments, which aim to maximize profits. A December conference in New York on that topic, run by JLens, drew representatives from 84 organizations.

But while impact investing has spread in the Jewish community, Hammerman says there’s a lot more work to be done. In addition to educating Jews about impact investing and helping foundations with investment strategies, JLens engages in shareholder advocacy campaigns to encourage public companies to behave more ethically.

“Business and investment capital has been channeled now for all sorts of campaigns and pursuits and goals, and the Jewish community has been absent,” Hammerman said. “As there is a recognition of the power of this arena and our lack of participation, our lack of leadership, there has been an understanding that, wait a second, we should be in this space.” 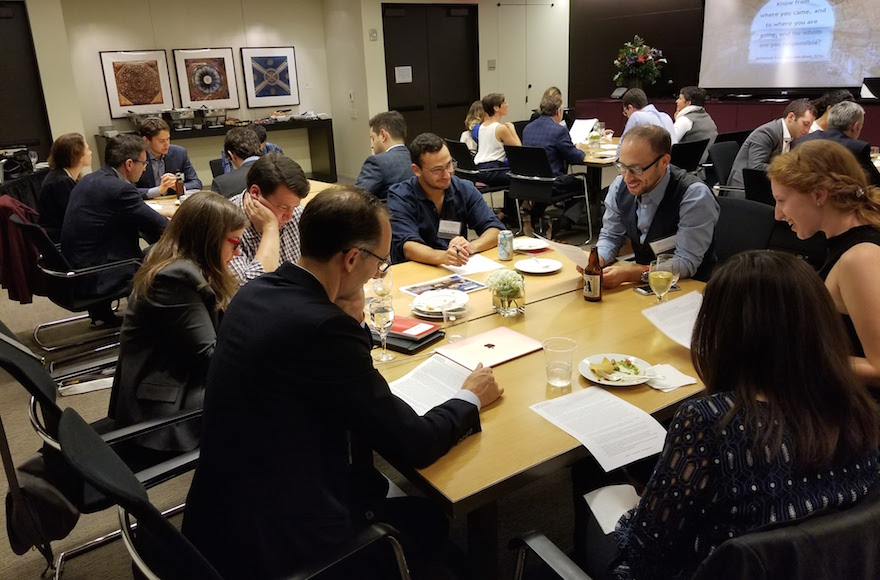 Lavan’s cohort of 25 fellows is examining the intersection between impact investing and Judaism. (Courtesy of Lavan)

But impact investing shouldn’t be seen as a reason not to donate money traditionally, said Andres Spokoiny, the president of the Jewish Funders’ Network. Spokoiny praised the partnerships that impact investing creates between nonprofits and the business sector, but said philanthropy can fill needs that will never be profitable but are still essential.

“I wouldn’t want people thinking every problem in the Jewish community can be addressed by impact investing,” he said. “Some philanthropy exists because they’re market failures, things the market cannot address even if you help them, even if you level the playing field.”

Deutsch says impact investing could address some issues the Jewish community has traditionally addressed through nonprofits. He suggests a ski travel business to engage young Jews, or a real estate fund that could buy up unused Jewish infrastructure, freeing up capital for synagogues and community centers to use more productively.

“The Jewish world is throwing everything it can at the issue of next-gen engagement,” he said. “How come we aren’t seeing foundations invest in these types of companies? How come no Jewish foundation that cares about intermarriage invested in JDate,” the Jewish dating website.

To promote that type of thinking, Lavan is running a fellowship for young Jews with money to invest to explore the intersection of Jewish values and the market. The 25 fellows meet to learn from investment professionals and discuss investment opportunities, from Israelis making high-tech physical therapy tools to startups tackling global poverty. At the end of the course, each fellow commits $10,000 toward an impact investment of their choice.

“One thing that stuck out in particular was tikkun olam, the notion of transforming the world and working individually and collectively to create a more perfect world,” said Lauren Thurin, a current fellow who comes from a philanthropic family in Australia, and who works for Rockefeller Philanthropy Advisors. “It was always important to me, but I didn’t know why it was important to me.”

As part of the fellowship, the fellows examine Jewish texts that inform how money should be invested. In one class, they compared the vertically integrated structure of SolarCity, Elon Musk’s solar energy company, with a rabbinic story about the Tower of Babel in the book of Genesis. In another class, they examined the Jewish idea that “the poor of your city should come first.”

“Everything is about living more consciously and making choices based on your Jewish values,” said Rabbi Amitai Fraiman, who helped build the Lavan fellows’ curriculum. “And if we can add another realm of your life where you’re doing that, that’s good.”