In Democratic race for Illinois governor, the two top candidates are Jewish. The similarity ends there. 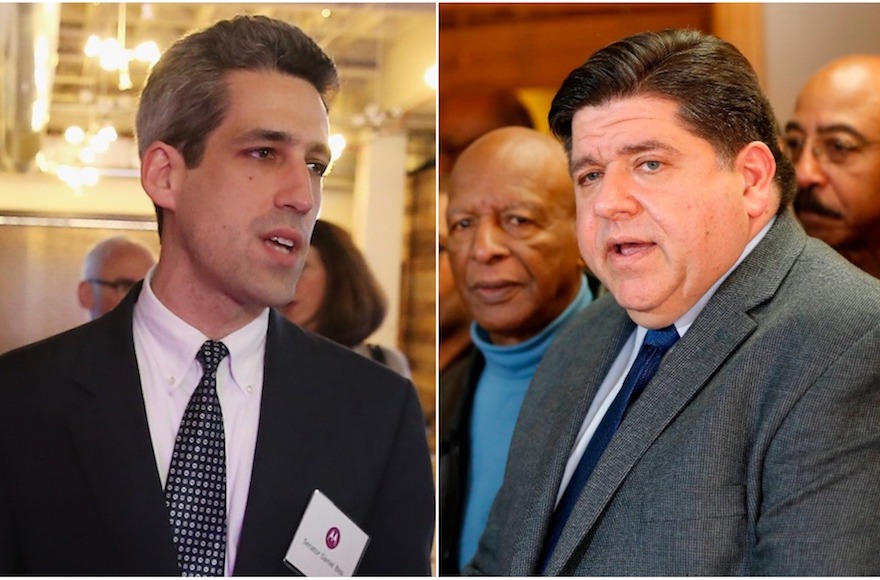 Daniel Biss, left, and J.B. Pritzker are both running to be the Democratic nominee for governor in Illinois. (Getty Images)
Advertisement

Two Jewish candidates are the front-runners in the Illinois Democratic gubernatorial primary in March, and both are favored to defeat the unpopular Republican governor, Bruce Rauner, in the general election. Among the Democrats, a son of the Kennedy family also is in the running.

But between the two Jewish Democrats, religion and political party are where the similarities end.

J.B. Pritzker, a billionaire venture capitalist with ties to establishment Democrats, has enjoyed a commanding lead in the polls. But Daniel Biss is gaining — he’s a state senator who has aligned himself squarely with the progressive movement of Bernie Sanders.

Chris Kennedy, a wealthy investor and son of the late Robert F. Kennedy, is vying with Biss for second. And a large number of voters are undecided.

Though the two front-runners have faced controversy — in Biss’ case relating to Israel — both are projecting confidence as they head into the primary’s final weeks. Here’s how Pritzker and Biss compare.

How they got here

J.B. Pritzker is a scion of the wealthy Pritzker family whose ancestor A.N. Pritzker founded the Hyatt Hotel chain. J.B. Pritzker, 53, graduated from Northwestern Law School and founded a venture capital firm in Chicago with his brother Anthony. He has a net worth of $3.5 billion.

This isn’t his first foray into politics. In 1998, he ran in the Democratic primary for Illinois’ 9th Congressional District, which has a large Jewish population. He lost to Jan Schakowsky, who still holds the seat.

Daniel Biss, 40, grew up in a family of musicians in Ohio, and earned his doctorate in mathematics from the Massachusetts Institute of Technology. He taught math at the University of Chicago from 2002 to 2008, and left to pursue a career in activism and politics.

Biss served as a policy adviser to the Democratic governor of Illinois starting in 2009, and was elected to the state House of Representatives the next year. In 2012, he was elected to his current position as a state senator representing Chicago’s northern suburbs.

What they stand for

Pritzker vs. Biss is a local version of Hillary Clinton vs. Bernie Sanders, the two approaches that have divided the Democratic Party since the 2016 presidential campaign. Pritzker is an establishment Democrat with deep connections. Biss is an upstart progressive campaigning against billionaires (like Pritzker).

Pritzker has been a Clinton ally for more than a decade and served as her national co-chair in the 2008 Democratic primary. His sister, Penny, was a key Obama ally that year, leading to a sibling rivalry. Penny Pritzker ended up serving as Obama’s commerce secretary, while J.B. again was a major donor to Clinton in 2016, hosting a fundraiser for her at his home.

In this effort, Pritzker has maintained his establishment ties, scoring endorsements from both of his state’s Democratic senators, Dick Durbin and Tammy Duckworth. He is campaigning on Democratic touchstones of pledging more funding for education, health care and social services.

Biss has purposefully aligned himself with Bernie Sanders-style Democratic politics. His ads rail against a “rigged system,” and he pledges to “make billionaires pay their fair share in taxes.” He is campaigning for key Sanders policies like Medicare for all, the universal health care proposal and free higher education.

Biss has also made inroads among the Sanders activist base. He was endorsed recently by Our Revolution, the successor group to Sanders’ 2016 campaign. And his initial running mate was a member of the Democratic Socialists of America, but that didn’t work out.

Why they’ve gotten in trouble

Both candidates have faced controversy, with Biss’ relating to Jewish issues.

His initial running mate was Carlos Ramirez-Rosa, a Chicago alderman who is a member of the Democratic Socialists of America. But Biss faced backlash for the choice, made in September, because the DSA — along with Ramirez-Rosa personally — supports the Boycott, Divestment and Sanctions movement against Israel. Ramirez-Rosa had criticized the United States because it “subsidized the oppression of the Palestinian people.”

The move led Rep. Brad Schneider, a Jewish Democratic congressman from the Chicago suburbs, to withdraw his endorsement of Biss. Biss then dropped Ramirez-Rosa from the ticket, claiming that Ramirez-Rosa had previously told him he opposes BDS.

Pritzker has come under fire of late. The most prominent scandal came from a tape recording of him speaking to former Illinois Gov. Rod Blagojevich, a Democrat who is now in prison on corruption charges, about filling President Barack Obama’s U.S. Senate seat. Pritzker suggested Illinois Secretary of State Jesse White, who is black, as that “covers you on the African-American thing.” He also called Rep. Jesse Jackson Jr. a “nightmare.”

In another tape recording of a conversation with Blagojevich, Pritzker sought political office from the governor.

What they say about their Judaism

Both Pritzker and Biss credit their Jewish background for who they are. Pritzker and his relatives are longtime donors to Jewish causes, and Pritzker includes his support of the Illinois Holocaust Museum and Education Center in his campaign website biography. He also has served on the national board of the American Israel Public Affairs Committee, the pro-Israel lobby.

In an interview with a Chicago Jewish paper, Pritzker said his childhood was imbued with Jewish values.

“I’ve often said it’s hard to separate the values of my parents and the values of my religion,” he said. “When we would go to temple and listen to discussions (in services or Sunday school), there was no difference between the things being taught at temple and those being taught at home. … It was just the basic things you learn from your rabbi and teachers are the same things we were learning from experiences with our parents.”

Biss is descended from an Israeli mother and grandparents who survived the Holocaust. He grew up in a secular, culturally Jewish family. He told the Chicago Sun-Times that his maternal grandparents gave him “a deep sense of Jewish identity” but not “a strong sense of ritual observance or literal belief, necessarily.” His grandparents on the other side “had kind of a Marxist view on religion.”

In a story he’s told multiple times, Biss recalls fasting on Yom Kippur as a child, when his maternal grandmother came up to him and said, “Why would you do that?”

Biss still identifies as a Jew, though he has said he does not observe many rituals. He said he consulted a rabbi when he launched his run for governor.

“There is a place for morality and ethics and a kind of a sense of community in politics,” Biss told the Sun-Times. “In fact, that’s the point of politics. And many of us have those senses shaped by our faith. But, then, if you bring the faith into politics in a way that’s exclusive of somebody else, that’s just dead wrong.”