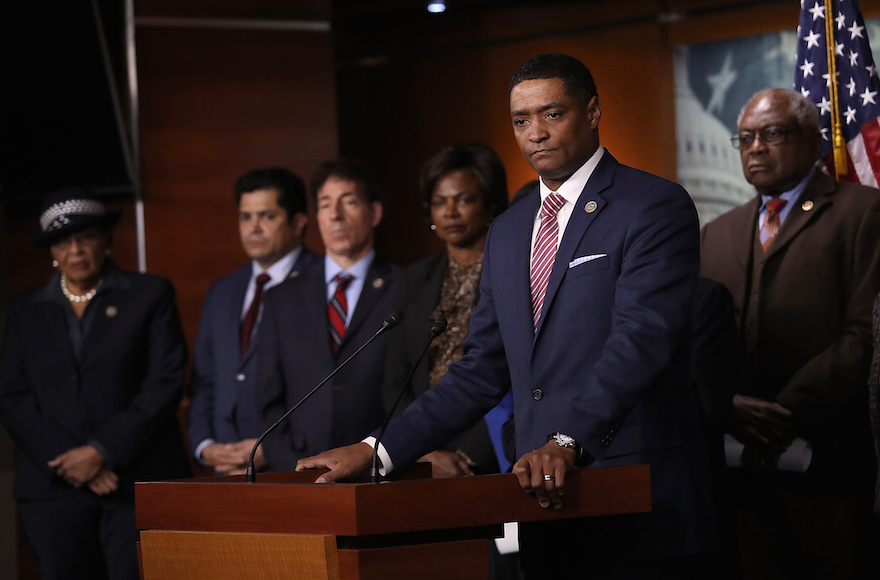 Congressional Black Caucus Chairman Cedric Richmond speaking at a press conference with members of the caucus and members of the House Judiciary Committee at the U.S. Capitol, Jan. 18, 2018. (Win McNamee/Getty Images)
Advertisement

WASHINGTON (JTA) — The Congressional Black Caucus is urging Israel’s government to end a plan that forces some 40,000 African migrants in the country to choose between deportation and jail.

Under the Israeli plan, migrants face a choice between jail and deportation later, or deportation now with cash incentives and free airfare. Until now, most of the migrants who have declined deportation have been free to live and work in Israel, albeit while facing some discriminatory policies.

Instead, the caucus urges Israel to adopt the position proposed by advocates for the migrants and to funnel them through existing international refugee processing systems to third countries. A draft letter circulating among caucus members, first reported Tuesday by Haaretz, notes that a number of Jewish groups, including the Anti-Defamation League and HIAS, the lead Jewish immigration advocacy group, have made similar recommendations.

Israeli officials are wary of the more formal process, which can take years.

“As a close friend of the United States and a vital regional ally, Israel is a beacon of democracy and good governance in the Middle East,” the letter says. “Given such a discouraging state of affairs, we seek to mitigate a potential humanitarian crisis.”

The letter takes into account Israeli concerns that some of the migrants may be seeking employment and not refuge, as well as the national security concerns presented by the arrival of undocumented migrants. It also notes that the migrants are “primarily from Eritrea and Sudan, countries characterized by political instability and violence” and that many were “victims of kidnapping, torture, and sexual violence.”

But it says that the proposal currently in place, which would send the migrants to an unnamed African country with a payment of $3,500 along with  free airfare and other incentives, presents dangers to the migrants. It notes that African migrants to Israel who have taken similar offers in the past have faced dangers in their travels, including human trafficking and in some cases death.

The letter has yet to be sent.

Haaretz reported that 15 of 49 members of the Congressional Black Caucus have signed the letter, including some who over the years have taken a lead in advancing pro-Israel policies, among them Sen. Cory Booker, D-N.J., and Reps. Alcee Hastings, D-Fla., and Elijah Cummings, D-Md.