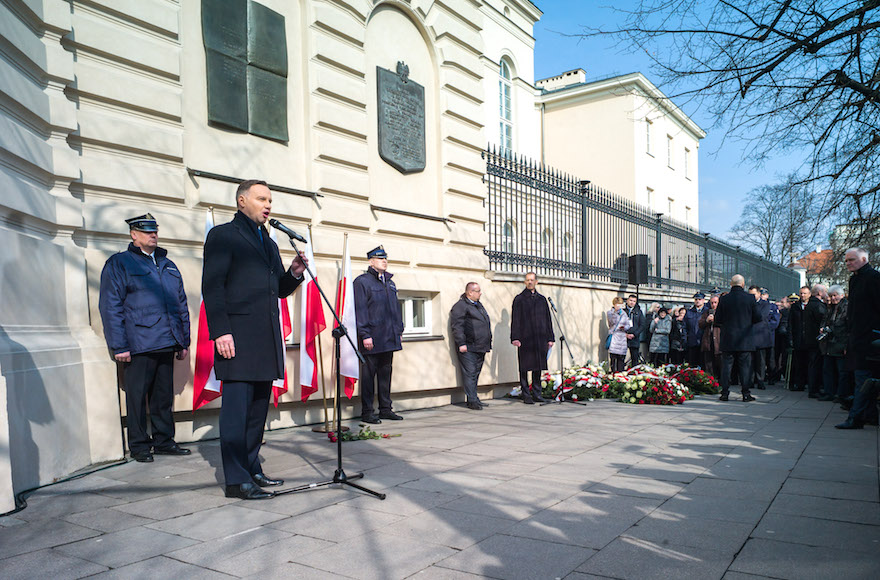 WARSAW (JTA) — Poland’s president asked for forgiveness for an anti-Jewish wave that drove Jews from the country in March 1968, but said today’s Poland is not responsible for the events of 50 years ago.

“I bow my head with great regret as president. To those who have been expelled, I would like to say ‘Please, forgive me, forgive Poland and Polish people,’” Andrzej Duda said Thursday at the University of Warsaw at a commemoration of the events in Poland known as March 1968.

After the Six-Day War in 1967, countries under the influence of the former Soviet Union condemned Israel. In 1968, Polish students protested against censorship. In addition to suppressing the students, the communist government engineered a massive anti-Semitic campaign that would see Jews dismissed from jobs and thrown out of the universities. Several thousand Jews left Poland for good.

Duda’s remarks came amid a furor over his government’s support of a law that would make it a crime to blame Poland for events surrounding the Holocaust. During his speech, critics of the law chanted “shame.”

A simultaneous speech with Duda’s commemorating the March 1968 events being held at the Gdanski rail station in Warsaw, March 8, 2018. (Katarzyna Markusz)

At a simultaneous commemoration at the Dworzec Gdański railway station in Warsaw, an adviser to Duda, Zofia Romaszewska, also was heckled as she read remarks from the president condemning anti-Semitism. One person in the audience shouted “now the authorities do the same” — that is, encourage anti-Semitism..Romaszewska recalled coming to the railway station 50 years ago to say good-bye to her Jewish friends.

“In independent Poland there is no place and there will never be a place for anti-Semitism,” Duda said in the letter she read. “Poland is a state of free and equal people. It is the common homeland of all its citizens,”

Israel’s ambassador to Poland, Anna Azari, received warm applause during her remarks at the train station. She said she has lived in Poland for over three years and for a long time could not understand how and why in 1968 a decision could be made to organize an anti-Semitic campaign and expel Jews from Poland.

“For the last one and a half months months I already know how easy it is to wake up in Poland anti-Semitic demons, even when there are hardly any Jews in the country,” Azari said. “I would like the view of history to be open and honest. The truth helps not only to understand the past, but also helps to create a democratic and tolerant society today.”