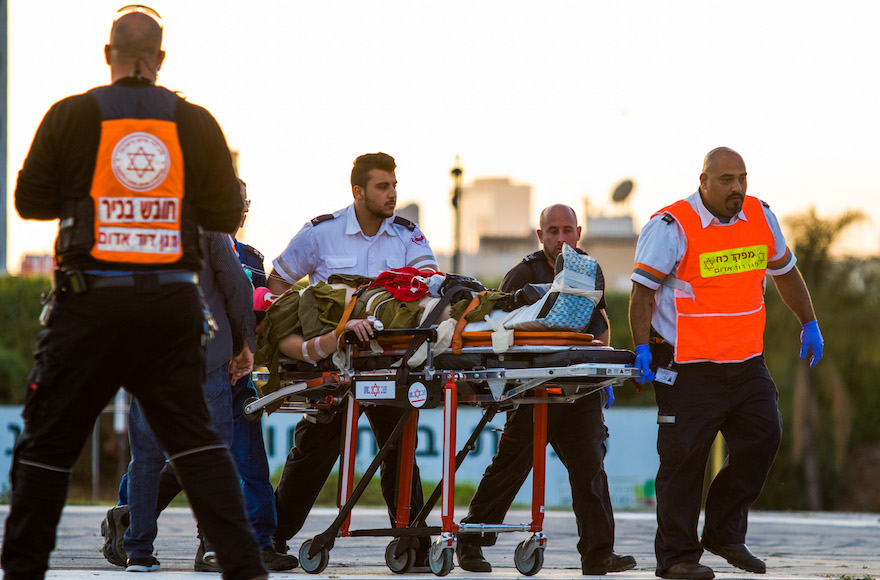 Medics evacuate by helicopter a wounded Israeli soldier at the Beilinson hospital in Petah Tikva after two Israeli soldiers died and another two where injured in a car-ramming terror attack near Mevo Dothan, in the West Bank, March 16, 2018. (Roy Alima/Flash90)
Advertisement

(JTA) — Two Israeli soldiers were killed and two were injured in a car-ramming attack by a Palestinian driver outside a West Bank settlement.

The Israel Defense Forces has confirmed that the man deliberately drove into the four soldiers, all in their 20s, on Friday afternoon in Mevo Dotan. The driver, 26, has been arrested.

The incident comes on a day that Palestinian groups, including Hamas, had designated as a Day of Rage to protest 100 days since President Donald Trump recognized Jerusalem as Israel’s capital. A coalition of Palestinian groups called for confrontations with soldiers and settlers after Friday prayers, according to The Times of Israel. Protests of the U.S. recognition have taken place weekly since it was made in December.