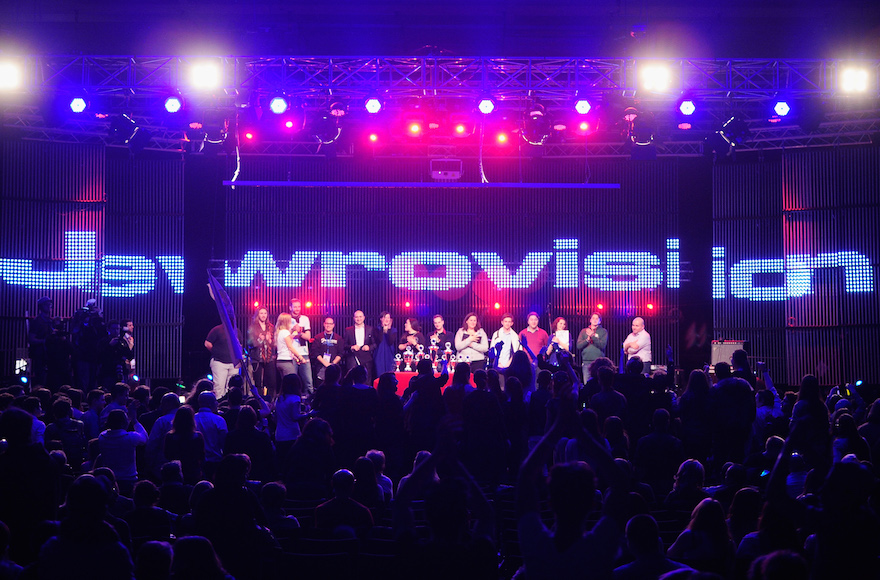 AMSTERDAM (JTA) — Each spring, the televised Eurovision song contest captivates the continent in ways that outsiders can never hope to understand.

A sort of Olympics for patriotic power pop, Eurovision might attract the interest of, say, Jews outside of Europe only when the Israeli entry is a strong contender — like this year’s unorthodox number “Toy” by Netta Barzilai.

But while Jewish pride is a sidebar at the $180 million Eurovision contest, it is front and center at Jewrovision — a Jewish version of the Eurovision song contest which took place on Sunday in Milan for the 19th consecutive year.

Approximately 200 youths from 10 countries participated in the event, organized for Jewish European youth by the World Bnei Akiva movement.

The winning song for the 2018 Jewrovision was “Am Echad” — Hebrew for “one people” — sung by the German group Krefeld.

The winning song was a mashup of two others numbers: “Rise” by Katy Perry and “We’re All in this Together” from “High School Musical.” Mascha Brosius, the Bnei Akiva leader in Krefeld, co-wrote the lyrics.

But the song had stiff competition in 13-year-old Emma Schipper from Amsterdam, who came in second with a Hebrew-language song titled “Halom” (dream). It speaks about God’s interventions to save the Jewish people. She selected the slow R&B-like ballad to show off the versatility of her metallic, full-bodied voice.

Schipper attends Amsterdam’s only Jewish high school and studies music with two Israeli teachers. She reached the auditions last year of the kids’ version of her country’s “The Voice” talent show, performing with her sister as the Emma & Laila duo. They didn’t make the cut, partly because judge Marco Borsato thought that one of them — he didn’t say who — was underperforming.

While showmanship is important to the organizers and judges of the contest, it takes a back seat to the real goal of the Bnei Akiva Jewrovision song contest: Providing a meeting point for young Jewish teens from small and often isolated Jewish communities with an assimilation problem.

“It is exciting each time anew to see contestants from so many countries in Europe go on one stage and sing about their connection with the State of Israel,” said Roi Abecassis, director of the World Bnei Akiva movement. “This competition is a priceless opportunity to receive a perspective about youths in Europe who are connected to Jewish tradition” and Israel.

Bnei Akiva is not the only Jewish organization that decided to harness the power of song to connect communities. In February, the Central Council of Jews in Germany held its 17th consecutive Jewrovision song contest in Dresden, though that competition is mainly for contestants in Germany.

A favorite in the Milan competition came from one of Europe’s smallest Jewish communities. Eden Avidan, 13, has competed in various national contests in Finland, including one last year in which she won second place.

“The song I sang in the [Jewrovision] competition was about Jerusalem, a city I very much like,” she said. The lyrics described the Israeli capital as a “quiet place packed with history.”

Faced with such seasoned competition, it is easy to understand why 16-year-old Micha Guskin of Zurich, Switzerland, was a bit apprehensive about performing in Milan. Unlike Avidan and the Schippers, it was his first real performance – not counting his singing in his synagogue back home, where he began leading prayers a few years ago in recognition of his cantorial skills.

But perform he did, singing “Israel is our home,” a song about the country as “a source of pride,” he said.