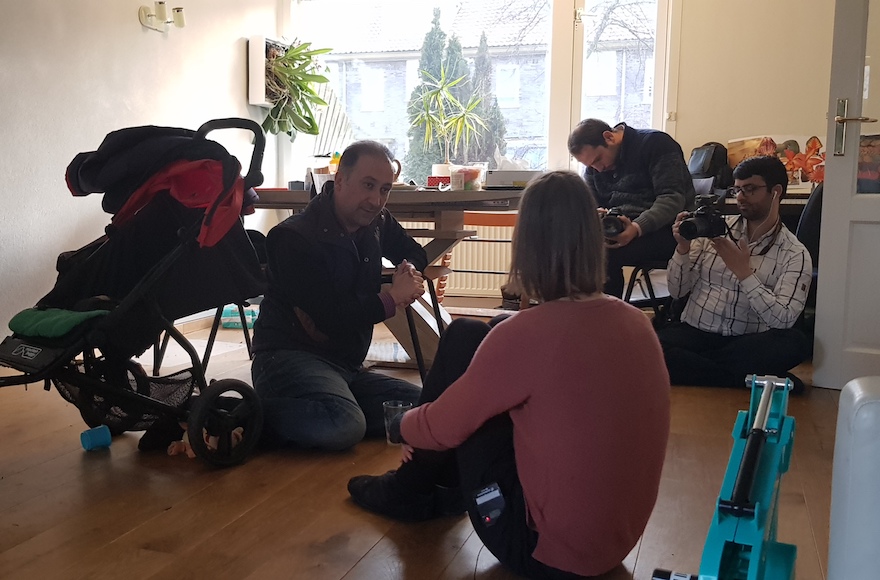 AMSTERDAM (JTA) — Do you feel comfortable leaving your wife and two kids alone with three Iranian men you hardly know?

It was the first question that Mohammad Delavari, a well-known journalist in Iran, asked me at my home last month.

It was not a hypothetical query.

Delavari had contacted me on Facebook to request an interview for a documentary about Israelis and Jews in Europe. Before the interview, I left him and two producers with my wife and kids for 20 minutes while I ran an urgent errand.

As soon as I returned, he noted, accusingly, that “anything could have happened,” suggesting he would never have left three men alone with his wife — a modesty issues for many Muslims, and a safety issue for any two peoples presumed to be on opposite sides of a conflict.

It was one of several fascinating exchanges that I had last month with the three journalists, who are producing a film that for the first time in Iranian television’s history attempts to introduce nuance to how Iranians view Israelis and Jews.

And while our talks revealed some mutual suspicion and radical differences in mentality, the encounter also offered plenty of common ground and rare interaction with devoted and highly professional colleagues who perhaps took a greater risk by visiting me than I did hosting them.

As for my own safety concerns, I had accepted their request for an interview at my home out of curiosity and journalistic solidarity — but not before I had studied my interviewers carefully during an earlier encounter at a public place and was satisfied that they were indeed colleagues.

As the interview at my home progressed, I learned from my guests that they had their own concerns regarding their attempt to put a human face on Israelis and Jews — people who are the subject of a government-led campaign of vilification in their native Iran.

For two hours, Delavari asked me about my religion, Israeli army service, feelings about the Israeli-Palestinian conflict, views on Iran, experiences with anti-Semitism and my grandparents’ survival of the Holocaust. He asked to see old family albums and even had me sing an Israeli song in Hebrew on camera.

“To my knowledge, this is the first time that an Iranian television crew is really trying to get to know Israelis,” one of the producers, both men in their thirties, told me. “We’re actually not supposed to be here, talking to you. It’s kind of illegal. Maybe they’ll take away our cameras and materials when we return. Maybe they’ll put us in jail for a little bit. We’ll see.”

In addition to myself, the production crew interviewed a rabbi and a singer of Yiddish in Berlin, they said.

Notwithstanding, Delavari’s questions did not give me the impression that he is interested in objectively presenting the Israeli point of view.

For example, he wanted to know whether I felt okay with how “Zionists came to Palestine and built a country on top of that country.” And how come I consider myself a Jew, although I neither believe in God nor observe halacha — Orthodox law?

He also asked whether I really believed that six million people died in the Holocaust and “why the Germans would want to kill so many Jews.” And “how come the Jewish people encounter so much hatred almost everywhere they live?”

I dished out the familiar answers to his loaded questions, whose line of reasoning is familiar to any reader of anti-Semitic blogs and websites.

There were some scenarios that he wanted me to consider: How would I feel if Iran destroyed Israel or only occupied parts of it? Was I worried over the prophecy of Ali Hosseini Khamenei, Iran’s supreme spiritual leader, about Israel’s impending demise? And would I have had a problem as an Israeli soldier in killing someone in war?

It seemed like Delavari treated our interview the way Western and Israeli television shows might treat an interview with Hamas or ISIS terrorists. In those interviews, the subject’s fanaticism and cold-bloodedness is so apparent that it needs no further exploration by the interviewer — who in turn focuses on the underlying human context.

Even so, if the film is completed and approved for distribution, it would be a unique departure from the demonization of faceless Israelis on Iranian television — which is why I agreed to the project in the first place.

Plus, it gave me a chance to pose some journalistic questions of my own.

I asked one of the visitors, whom I will not name, whether he believes in Allah.

With his back to the camera, he mouthed: “No,” so the microphone wouldn’t register his reply.

Two of my guests politely declined my offer of dinner because the meat served is not halal. But one ate gladly – as long as the camera wasn’t recording.

All of them worried about the of apple juice that I placed on the dinner table with three empty glasses for the guests.

“I wonder how we can convince our viewers this isn’t beer,” one of them finally said, referencing the ban on alcohol in Islam.

As we said our goodbyes, I told the visitors that I hope to be able to soon visit Iran, which does not let in Israelis.

Referring to the recent anti-government protests by opponents of Iran’s theocratic regime, I suggested its days are numbered and that I may be able to visit sooner than anyone of us suspects.

My guests’ smiles told me they got the hint.

“I hope so,” one of them said as he shook my hand goodbye.