Repair the World volunteers muck and gut a house in southwest Houston. More than six months after Hurricane Harvey, over 3,000 households in Houston are still uninhabitable. (Courtesy of Repair the World)
Advertisement

Avram Mandell is no stranger to disaster zones. As the founding director of Tzedek America, a Los Angeles-based social justice group that runs relief trips for Jewish teenagers, Mandell helped out in New Orleans in the aftermath of Hurricane Katrina and in Baton Rouge, Louisiana, in the wake of a devastating 2016 flood.

So he was hardly surprised on a recent trip to the Houston area with 15 California teenagers to discover floodwater still in homes six months after Hurricane Harvey decimated the area.

“The houses we were in in Port Arthur hadn’t been touched in six months,” Mandell said of the Texas town. “We were still finding floodwater in cups and pots and pans, jars of it.”

Over 300,000 homes in Houston alone were affected by Hurricane Harvey, which made landfall in Texas in late August and was among the costliest natural disasters in American history.

More than six months on, over 3,000 households in Houston are still receiving federal assistance to cover hotel costs – a figure city officials warn does not include families staying with relatives or friends. Mayor Sylvester Turner repeatedly has cited housing as a chief priority of his city’s recovery.

With full recovery still stubbornly elusive, Jewish groups recently decided to redouble their aid efforts with an initiative called ActNowHouston that brings together disparate efforts into an organized coalition and will invest more resources to make volunteer service trips to Houston easier, cheaper and more frequent.

“All of our coalition partners share one goal through ActNowHouston: to organize the groups who want to serve and enable those working on the ground in Houston to offer the most impactful service programming,” said David Eisner, CEO and president of coalition member Repair the World, which has had a staff member in Houston since November to help coordinate volunteer and rebuilding efforts.

Jewish aid workers and volunteers have been on the ground since the early days following the storm. Nechama, a Minnesota-based Jewish disaster relief group, sent a team to Texas right after Harvey and recently shifted gears to focus on rebuilding. The Jewish Federation of Greater Houston has worked closely with its local partners to deliver assistance to Houstonians still affected, even as it continues to respond to local Jewish needs.

But until last month, Jewish groups from out of town mostly were on their own if they wanted to send volunteers to Houston.

Then, in February, seven Jewish organizations announced the creation of the Leadership Coalition for Jewish Service and ActNowHouston. Organized by Repair the World, a decade-old Jewish group that partners with community and Jewish organizations in about a half dozen U.S. cities to mobilize local volunteers to address urgent needs, the coalition aims to maximize the impact of Jewish efforts in Houston. It launched a website to enable groups to register online for service trips; is offering some financial support to cover the cost of getting groups to Houston; is planning more frequent trips; and is coordinating closely with groups on the ground to make sure aid efforts go where they are most needed.

Also, the initiative is providing trips with an educational component grounded in Jewish teachings about the importance of service.

One Jewish group that went on a recent trip came from Ohr Kodesh Congregation in Chevy Chase, Maryland, which spent about $6,000 to bring 11 people ranging from teenagers to octogenarians to Houston for four days. Clad in Hazmat suits, the group cleared out rubble from several homes in northeast Houston, cut beams to reinforce the floors and helped to hang drywall.

“It was really meaningful,” said Hinda Labovitz, the congregation’s cantor. “It felt to us like we were able to make a dent in the city’s recovery, albeit a small dent. But it felt like we were there doing something and being helpful.” 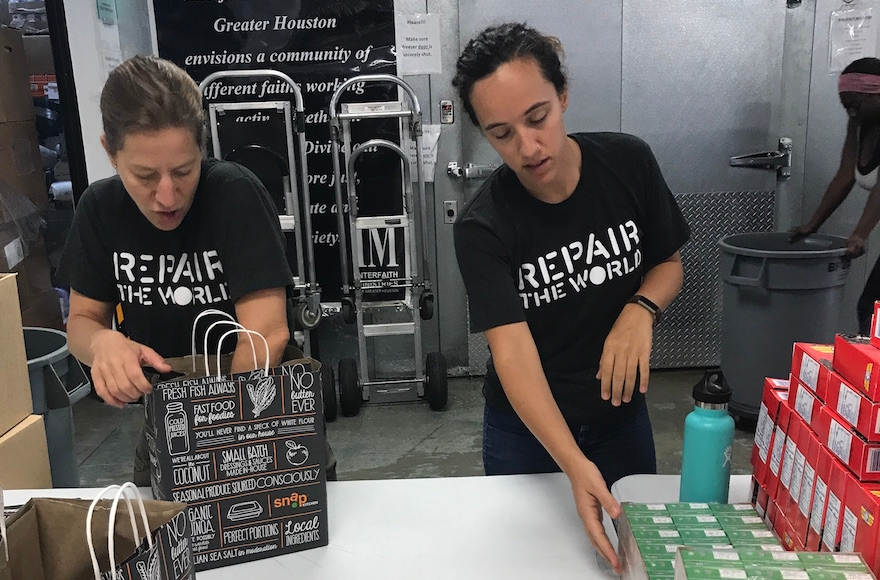 Volunteers with Jewish groups help pack food at Interfaith Ministries in a Houston neighborhood. (Courtesy of Repair the World)

Most of the work Jewish volunteers will be doing in Houston is home repair — cleaning out the damaged and moldy items, sanitizing what remains, and installing insulation and sheetrock. But thousands of Houstonians are still receiving food assistance, and some volunteer groups are helping pack lunch boxes and organizing food supplies. The Houston Food Bank is currently supplying twice its daily pre-Harvey distribution of food.

While most of the Jewish volunteer effort is aimed at Houston’s general population, Labovitz’s group did get a glimpse of the storm’s impact on Jews in the area. One of their days in the city was spent helping out at Congregation Beth Yeshurun, a Conservative synagogue home to a library of 44,000 volumes that was heavily damaged by Harvey.

“Hurricane Harvey brought unprecedented destruction to Houston, and the Jewish community was hit especially hard,” said Avital Ingber, CEO of Houston’s federation. “The solidarity and partnership we have experienced with Jewish organizations across the country has been energizing and revitalizing. While full recovery is expected to take years, our partnership with ActNowHouston expedites this critical work.”

“It’s holy work,” said Sacha Bodner, the coalition’s program manager and a Repair the World staffer. “Somebody’s grandmother, a friend, an entire family, has been displaced and you’re helping them get back home. In many ways it restores your faith in the goodness of others.”

On the second day of a weeklong volunteer trip to Houston in late February by a group from the University of Michigan Hillel, volunteers were working on a home when owner Jennifer Clay stopped by to offer her thanks. Clay had survived a harrowing ordeal during the storm, abandoning her home with her husband and three children as the floodwaters rose and completing a dangerous trek to safety with relatives several miles away.

“It was very special,” said Rebecca Grbinich, the Hillel fellow who led the trip. “I was excited because I could see her excitement and her realizing that her house is becoming a home again. It was very moving. It’s hard to put it into words.”