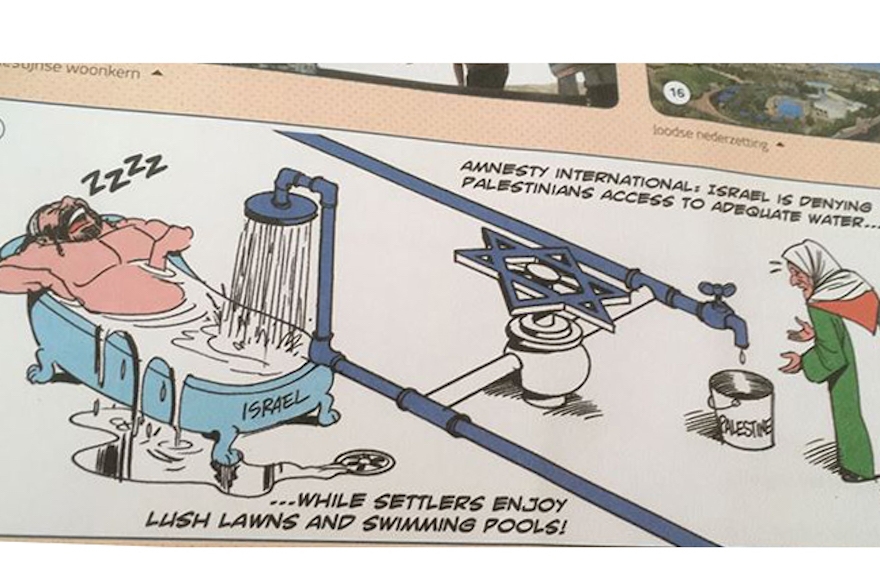 (JTA) — Amnesty International distanced itself from a caricature in a Belgian schoolbook ostensibly meant to illustrate its allegations that Israel is denying Palestinians fair access to water.

The illustration in the 2016 geography textbook “Polaris GO!3” for Flemish-speaking high school students depicts a beefy Orthodox Jewish settler lolling in an overflowing bathtub, while a Palestinian woman can barely fill her bucket.

A spokesperson for the human rights group last week told the Joods Actueel monthly in Belgium that the cartoon is “misleading.”

The book is used in several high schools in Belgium’s Flemish Region, one of three autonomous entities that make up the federal kingdom. It was written as an aid for the Flemish government’s GO! Educational program, which the government says on its website “takes extreme care to fulfill its fundamental mission, which is to offer ‘neutral’ education.’”

Raymonda Verdyck, who heads the Flemish government’s GO! Pedagogical program, condemned the inclusion of the cartoon in the book. She called it “stereotypical and incompatible with our pedagogical values.”

The cartoon is by the Brazilian artist Latuff, who often compares Israel to Nazi Germany in his works.