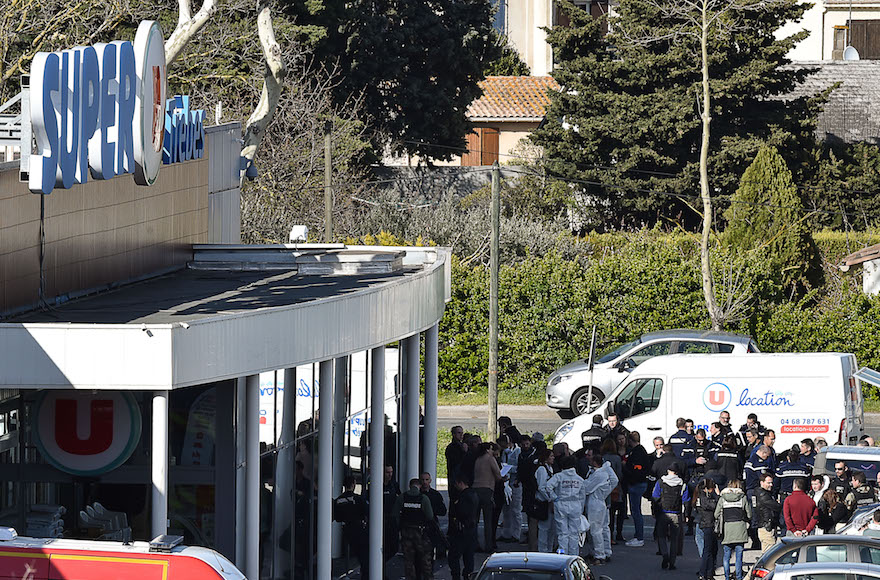 French security and police gathering outside the Super U supermarket in the town of Trebes, in southern France, where a man took hostages killing at least two before he was killed by security forces, March 23, 2018. (Pascal Pavani/AFP/Getty Images)
Advertisement

(JTA) — Leaders of French Jewry paid their condolences to the victims of a suspected Islamist who took hostages at a supermarket near Toulouse, killing at least three and injuring 10 people.

A statement Friday by CRIF, the umbrella group of French Jewish communities, said the incident in the town of Trebes “reawakens in us the fear and pain that we felt on Jan. 9, 2015,” when an Islamist holed up with automatic weapons inside the HyperCacher supermarket in Paris killed four Jews before police broke in and shot him to death.

In Trebes, the suspected hostage taker, a man in his 20s that the media reported was of Moroccan descent, also was killed Friday in a break-in at the Super U store where he was holed up with a firearm, Le Monde reported. He had shouted that he is affiliated with the Islamic State, or ISIS, terrorist group, the police commissioner of Carcassonne near Trebes told media, according to Le Monde.

The suspect demanded the release of Salah Abdeslam, who is standing trial in Belgium for his alleged role in terrorist attacks in Paris in 2015, Le Monde reported.

Tzipi Hotovely‏, Israel’s deputy foreign minister, said in a statement that Israel conveyed “thoughts and prayers with the hostages and their families.” Israel and France, she said, “share values of freedom and liberty and are cooperating in the global fight against terror.”