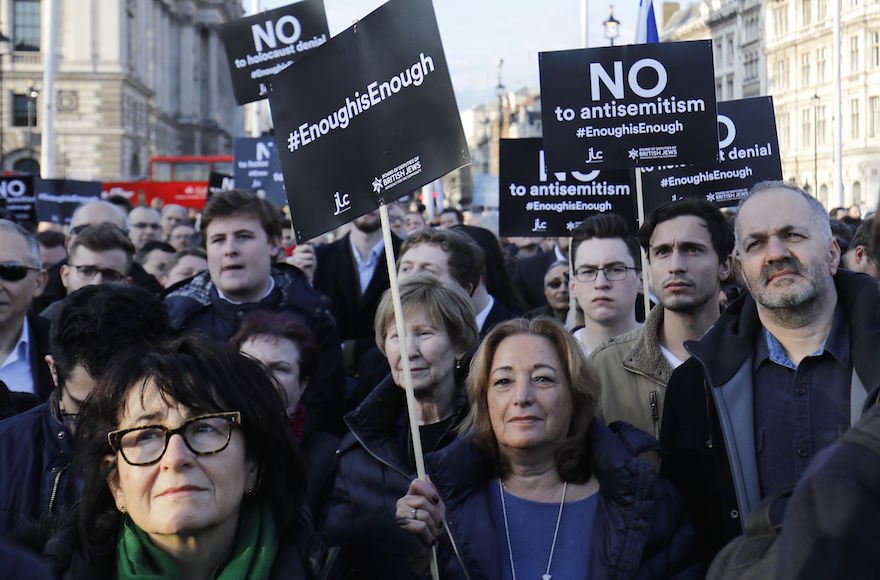 (JTA) — Approximately 2,000 people gathered outside the houses of Parliament in London to protest anti-Semitism in the British Labour Party.

The protest Monday also criticized Labour leader Jeremy Corbyn, whom British Jewish leaders have charged with enabling anti-Semitism in the party. Corbyn published a written apology ahead of the protest.

Organized by Britain’s Jewish Leadership Council and the Board of Deputies of British Jews, the protest attracted a few members of Parliament from Corbyn’s party. One was Luciana Berger, who is Jewish and told the crowd that “the anti-Semitism issue is real,” according to Haaretz.

She added: “I want to be able to address Jewish audiences with my head held high.”

Labour lawmaker John Mann, according to the BBC, said “The very existence of my Labour Party is at stake. It is time for Jeremy Corbyn to act.”

The protest came one day after British Jewish leaders sent an open letter condemning Corbyn for associating with anti-Semites and not doing enough to combat anti-Jewish discrimination in his party’s ranks.

Corbyn, long a virulent critic of Israel, was elected party leader in 2015. Since then, his critics say, Labour has tolerated anti-Semitism among its members. Labour officials have been expelled from the party for anti-Semitic statements, and a 2016 inquiry into Labour anti-Semitism said there was an “occasionally toxic atmosphere” in the party.

Corbyn has also faced criticism for associating with anti-Semites and Holocaust deniers, and for some statements he has made. In 2009, he described the terror groups Hamas and Hezbollah as “friends,” and was also a member of Facebook groups that included anti-Semitic statements. The issue flared anew this week when a 2012 Facebook post by Corbyn resurfaced in which he supported the creator of an anti-Semitic mural.

“Today, leaders of British Jewry tell Jeremy Corbyn that enough is enough,” said the letter sent Monday to John Cryer, the chair of the Parliamentary Labour Party. “He is repeatedly found alongside people with blatantly anti-Semitic views, but claims never to hear or read them… He issues empty statements about opposing anti-Semitism, but does nothing to understand or address it. We conclude that he cannot seriously contemplate anti-Semitism, because he is so ideologically fixed within a far left worldview that is instinctively hostile to mainstream Jewish communities.”

Corbyn condemned anti-Semitism in a statement Sunday, and sent a letter apologizing to the Jewish community ahead of the protest. He called for an “urgent meeting” with British Jewish leadership. He also has apologized separately for the 2012 Facebook post, as well as for his 2009 comments about Hamas and Hezbollah.

“I recognise that anti-Semitism has surfaced within the Labour Party, and has too often been dismissed as simply a matter of a few bad apples,” the Monday letter said. “This has caused pain and hurt to Jewish members of our party and to the wider Jewish community in Britain. I am sincerely sorry for the pain which has been caused, and pledge to redouble my efforts to bring this anxiety to an end.”

While condemning Israel’s treatment of the Palestinians, Corbyn also acknowledged that some criticism of Israel veers into anti-Semitism.

“Comparing Israel or the actions of Israeli governments to the Nazis, attributing criticisms of Israel to Jewish characteristics or to Jewish people in general and using abusive phraseology about supporters of Israel such as ‘Zio’ all constitute aspects of contemporary anti-Semitism,” Corbyn wrote.

A pro-Corbyn group, Jewish Voice for Labour, held a small counterprotest next to Monday’s demonstration.