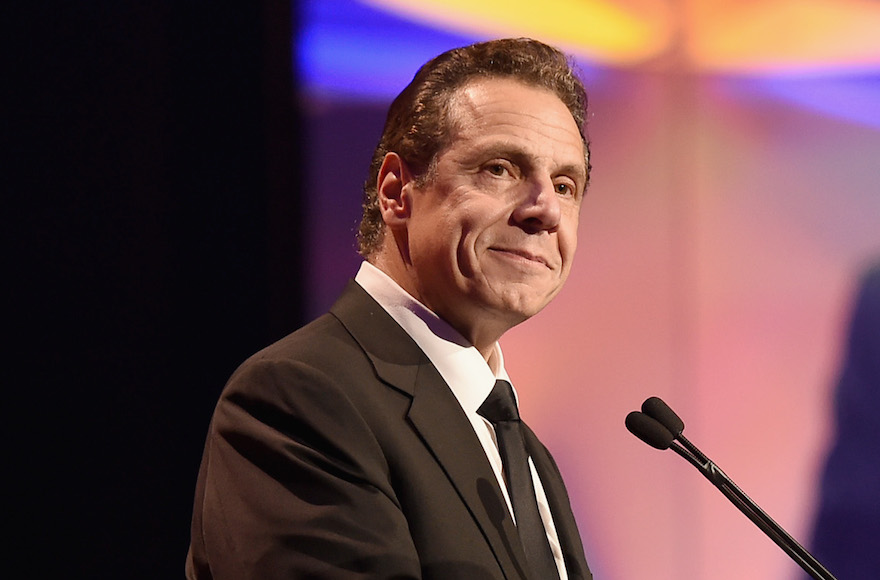 (JTA) — George Gershwin may have written “I Got Rhythm” and Benny Goodman may have given it a big band twist, but New York Gov. Andrew Cuomo says Jews don’t have it.

“I want you to know as a matter of full disclosure, I am a Catholic. Catholics basically believe the same teachings that Baptists believe. We just do it without the rhythm. But we try,” Cuomo said at the Mount Neboh Baptist Church, the New York Post reported Monday. “We are not as without rhythm as some of our Jewish brothers and sisters.”

Cuomo singled out Democratic consultant Hank Sheinkopf, a former campaign adviser who was ordained as an Orthodox rabbi in 2011. Sheinkopf was at the church because he works for its pastor, the Rev. Johnnie Green, and his Mobilizing Preachers and Communities advocacy group.

“I was watching Mr. Sheinkopf here in the front row moving to the music,” Cuomo said. “It was ugly, I’ll tell you the truth.”

Sheinkopf told the Post that not many congregants laughed at the governor’s joke and added that he “didn’t feel humiliated.”

Cuomo spokeswoman Dani Lever told the newspaper: “He was clearly poking fun at himself and one longtime friend who was in the audience.”

Cuomo, who is being challenged for re-election by “Sex and the City” star Cynthia Nixon, was at the church to promote spending plans in the state budget to be unveiled on Saturday. The budget calls for $550 million to clean up public housing.

Correction: An earlier version of this story suggested that singer Ethel Merman was Jewish. She was not.