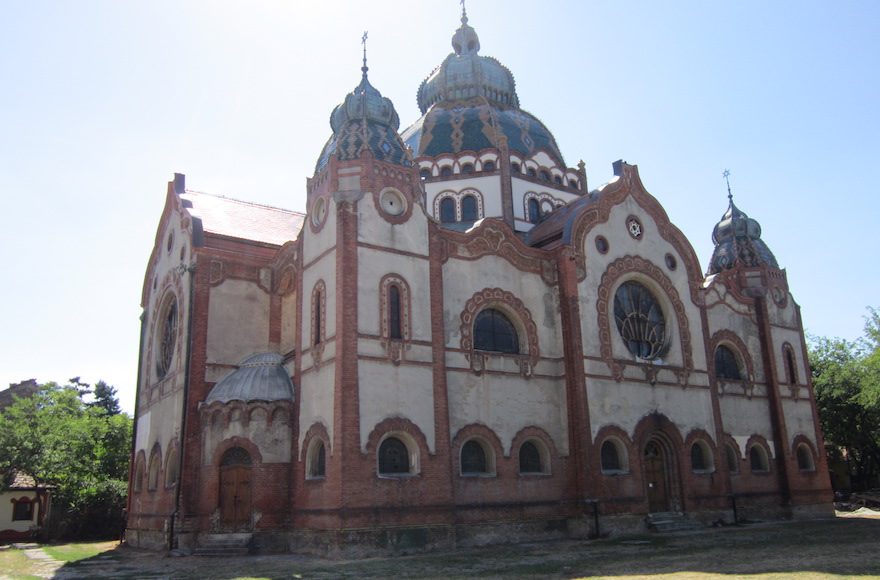 The synagogue in Subotica, Serbia, in 2008. (Boris Brdjanin/Wikimedia Commons)
Advertisement 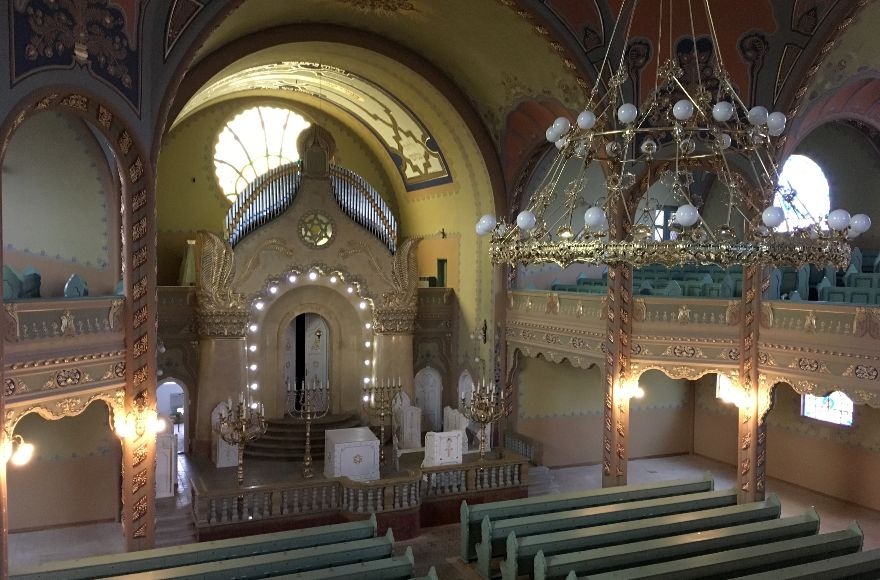 The interior of the restored art nouveau synagogue in Subotica, Serbia looking toward the ark. (Photo/Ruth Ellen Gruber)

Some 900 invited guests attended the ceremony Monday in Subotica.

The synagogue, which is owned by the municipality, will be managed as a tourist attraction and concert venue. But the small local Jewish community can also use it for services and on other occasions.

Both Vucic and Orban called the multimillion-dollar restoration of the synagogue a symbol of cooperation among Serbs, Hungarians and Jews.

Hungary allocated significant funding for the restoration, including about $2 million for the interior. When the synagogue was built in 1902, Subotica was part of Hungary.

In his speech, Orban noted that in 2014, the 70th anniversary of the Holocaust in Hungary, the Hungarian government launched a $40 million “synagogue renovation program” that along with he Subotica synagogue has funded the renovation of synagogues in Budapest and Ukraine.

Attempts to restore the building began in the mid-1970s, but only gained momentum in recent years. The World Monument Fund made it a priority project, and in 2014 the Europa Nostra heritage organization put it on its list of seven most endangered heritage sites.

At the ceremony Monday, local Jewish community leaders from Serbia and Hungary, as well as diplomats, representatives of the church and other VIPs, were among the guests.

“It was joy, happiness, a wonderful day – like a dream,” Robert Sabados, president of both the Subotica Jewish community and the Federation of Jewish Communities in Serbia, told JTA.

Orban called it “a good example of the fact that we now live in times here in Central Europe when the past is not a burden, but the past opens the gate to a common future: a future in which Hungarians, Serbs and Jews will live and work together in peace and safety.”

But he also made veiled reference to his right-wing government’s virulent anti-immigrant policy.

Hungary holds general elections on April 8, and Orban’s government has been waging a strident campaign against the Jewish Hungarian-American financier George Soros, whom it accuses of fostering rampant immigration from Muslim countries. Many critics feel the anti-Soros campaign has anti-Semitic overtones.

“We still live in the Europe which rests on the Jewish and Christian heritage,” Orban said. “If we allow this ground to be cut from under our feet, if we allow others to replace the cultural subsoil of Europe, then instead of us, others will write the future.

“We know that in the world today there are regions to the south and east of us where our Jewish and Christian brothers and sisters are being persecuted,” he said. “And we know that in the world there are areas to the west of us in which churches and synagogues are not being renovated, but being torn down. We, however, are proud of the religious heritage which has given us this city and the magnificent creation which we call Europe.”

Subotica’s Jewish community was all but wiped out in the Holocaust, and in his speech Monday, Serbian Chief Rabbi Isak Asiel called the restored building a symbol of the continuity of life after the Shoah.