Paris vigil for murdered Holocaust survivor brings together family, politicians and a Muslim rescuer of Jews 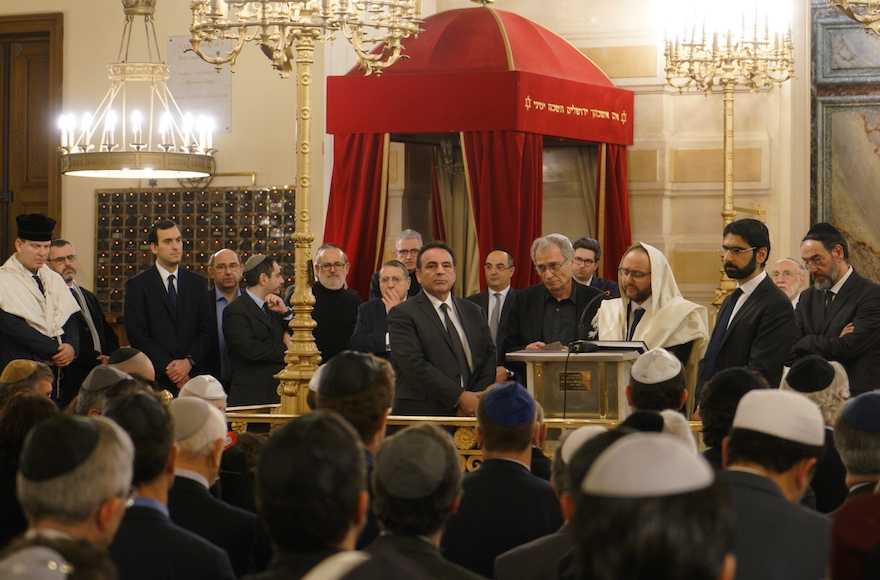 Daniel Knoll, on the left side of the podium, with white kippah and no tallit, at a vigil for his mother at the Tournelles Synagogue in Paris, March 28. (Cnaan Liphshiz)
Advertisement

PARIS (JTA) – French Jews mourning a Holocaust survivor murdered in her Paris apartment welcomed the presence of France’s interior minister, Gérard Collomb, at a vigil in her memory.

“We appreciate authorities’ swift action for justice and continued support,” Joel Mergui, the president of the Consistoire Jewish group, said Wednesday during a vigil at the Tournelles Synagogue in Paris in memory of Mireille Knoll.

Prosecutors said she was murdered, partly because she was Jewish, by a Muslim neighbor and an accomplice. Knoll’s son Daniel eulogized his mother before an audience of hundreds at the vigil.

Earlier that day, President Emmanuel Macron attended Knoll’s funeral, where he embraced one of her children and vowed to fight anti-Semitism.

But for many Jews at the vigil, which followed a memorial march through Paris, Collomb’s presence seemed secondary in importance to that of a young African Muslim man who unceremoniously entered the synagogue and sat in the back row. Within minutes, all eyes were on the man — Lassana Bathily, a 27-year-old from Mali whom many consider a hero because he hid a dozen people from the jihadist who killed four Jews at a kosher store in 2015.

After the vigil, dozens of people huddled around Bathily — some to hug him, others only to shake his hand and several to pose for a selfie with him.

Some women crossed over from their section of the synagogue to greet Bathily and thank him for coming, addressing him in the familiar “tu” pronoun rather than the “vous” that they would normally use with strangers. 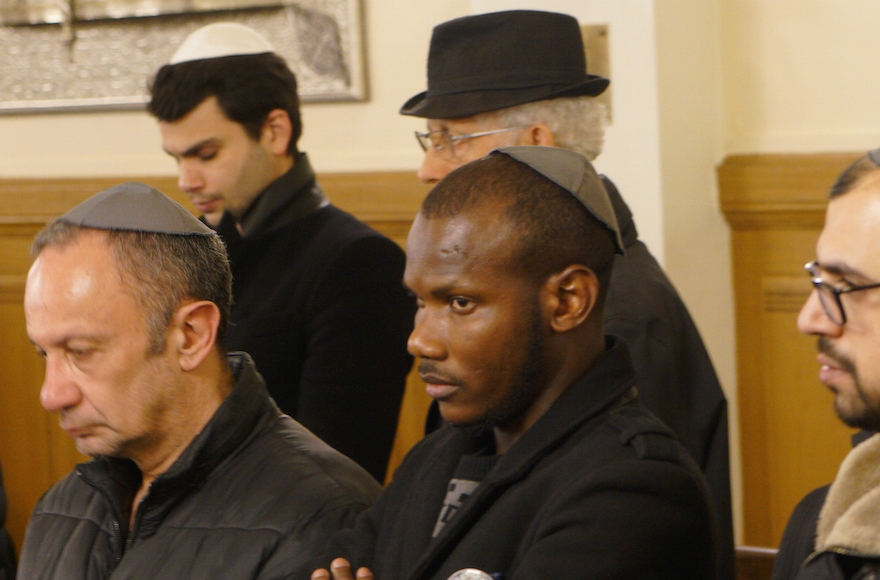 Lassana Bathily praying with members of the Jewish community at the Tournelles Synagogue in Paris, March 28. (Cnaan Liphshiz)

Several people said his presence offers hope amid growing despair over the proliferation of anti-Semitic violence and the apparent inability by authorities to stop it.

“The minister is here and Mayor Anne Hidalgo is also here, and that’s important because their commitment to the values of the French Republic is imperative for the survival of Jewish life here,” David Mechal, a Jewish man from the suburb of Sarcelles, told JTA. “But real change is not up to them. It’s up to people like Lassana, so it’s moving to see him with us here, standing with us in solidarity in our hour of need.”

For Bathily, who has consistently rejected assertions that he was a hero, attending the vigil was “an act of solidarity,” but also a message, he told JTA.

“I want to tell the Jews of France, you are not isolated. You are not abandoned. This is your country,” said Bathily, who himself became a French citizen by power of an executive decree weeks after the bloodbath at the HyperCacher store in recognition of his role in saving people from the perpetrator. “Do not leave France, stay here,” he added. “There are many like me who support you.”

Bathily was among many non-Jews who showed up for commemoration events Wednesday in memory of Knoll, whose killing shocked many Frenchmen because of its brutality – she was stabbed 11 times before her body was torched – but also because she survived the 1942 roundup of Jews by French police working for the Nazis.

Some non-Jews at the march, which had at least 10,000 participants, were holding signs reading “don’t touch my buddy.” Others, like Alain Ndigal, a 48-year-old mechanic of African descent, wore Israeli flags.

“I am here to support French Jews, sure, but I’m also here to support myself and other Frenchmen,” said Ndigal, a devout Christian. “We know by now that what begins with the Jews never ends with them. We are also in the crosshairs.”

Notwithstanding, French Jews appeared to have been the overwhelming majority at the march, despite calls by organizers of the CRIF umbrella group of French Jewish communities for non-Jews to attend.

A scuffle broke out when Marine Le Pen, the lead of the far-right National Front, showed despite a warning from CRIF President Francis Kalifat that she was not welcome. Dozens of her supporters shouted “Marine is with us” as others shouted “N for Nazi,” referencing the first letter of her party’s name. French Jews believe it is a hotbed of anti-Semitism, though she denies the assertion.

Jean-Luc Melenchon, a far-left politician whom CRIF said engages in anti-Semitic rhetoric, also showed up despite being asked not to.

Attendance by non-Jews at commemorative events for victims of anti-Semitism is a major issue to many French Jews, who feel their society is more likely to focus on Islamist violence when it is directed at non-Jews.

Halimi wan an elderly Jewish woman who, according to prosecutors, was killed by her Muslim neighbor in Paris last year.

“I see mostly graying Jews. This place looks like a CRIF conference and it slightly depresses me,” Cohen said.

Daniel Knoll touched on this point in a highly emotional eulogy he delivered at the synagogue for his mother.

“I look around and I want to see everyone, not only Jews, but people of all colors, all faiths, at these events,” he said.

Referencing how hatred of Israel sometimes morphs into hatred of Jews in France, he asked: “But why hate Israel in the first place? It’s a good place, based on justice. Why hate Israelis? My daughters are Israelis. They are wonderful, compassionate women.”

Visibly grief-stricken, Daniel Knoll told the crowd that “he has no answers for those questions,” or the question with which he concluded his speech: “How do I go on now, without a mother, with this terrible pain?”