Conservative Judaism’s leadership turns over. Will intermarriage policy be next?

Rabbi Steven Wernick is stepping down from his position as CEO of the United Synagogue of Conservative Judaism. (Mike Diamond Photography)
Advertisement

(JTA) — With Passover here, leaders of the Conservative movement are engaged in their own exodus.

The CEOs of the movement’s rabbinic and congregational umbrella groups are both stepping down. Next month, for the first time in years, there will be a contested election for one of the top lay leader positions of its rabbis’ association.

The wholesale changes add more uncertainty — and opportunity — to a religious denomination already in flux. Conservative leadership says it’s just normal professional turnover and that major ideological changes are not around the corner. But for Conservative rabbis who want to see a policy shift, particularly on interfaith marriage, this could be an opening.

Conservative Judaism prohibits officiating at, attending or otherwise celebrating an intermarriage, but a number of Conservative rabbis want some or all of those rules to change. Some want to perform intermarriages. Others want to ritually recognize them in synagogue. Still others want to at least attend intermarriages (and already do, despite a formal but rarely enforced ban on the practice). And some want the rules to stay exactly as they are.

“Rabbis trying to service congregants might become more liberal in terms of how they address intermarriage,” said Rabbi Charles Simon, who last year retired after 35 years as head of the Conservative men’s club association, about the leadership change. “They feel this is their calling. They feel it’s important. They feel they’re making Jewish families. There’s potential in the gap that might arise, where we see rabbis being more independent.”

Nearly everyone interviewed for this article — leaders, rabbis, external observers — named intermarriage as a key challenge facing the movement. Rabbi Steven Wernick, who announced Thursday that he will step down after nine years as the CEO of the United Synagogue of Conservative Judaism, an umbrella group, told JTA that intermarriage is the biggest challenge facing his successor.

Also stepping down next year is Rabbi Julie Schonfeld, CEO of the Rabbinical Assembly, the Conservative rabbis’ group. Wernick and Schonfeld have both held the top professional positions at their respective institutions since 2009, and their contracts both expire in 2019. Schonfeld did not respond to JTA requests for comment. 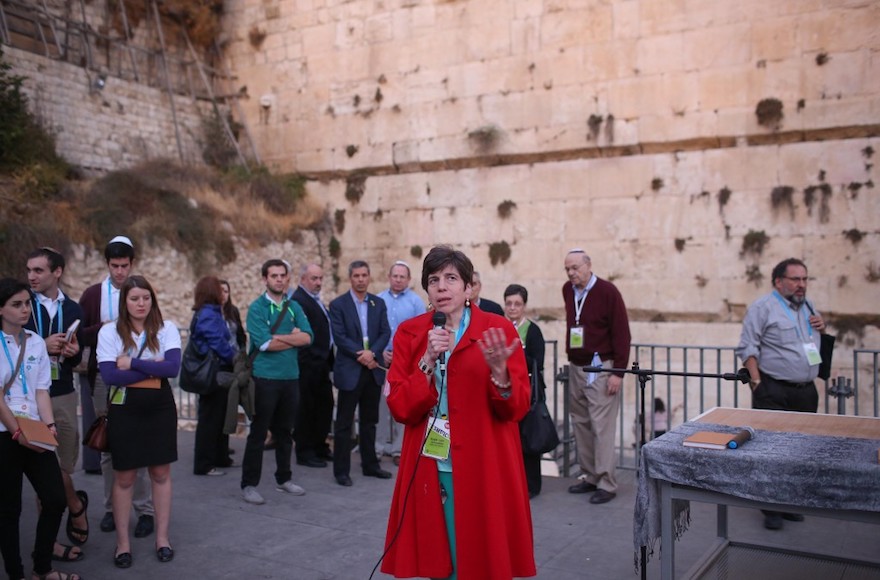 Rabbi Julie Schonfeld speaking in Israel in 2013. (Courtesy of Schonfeld)

“There’s tension in how we deal with intermarriage as a centrist movement,” said Wernick, who plans to move into a pulpit role. “This is not a black-and-white issue for us, and there’s good logical arguments on both sides of the debate that we have to work with.”

Until now, the movement did seem to see intermarriage as, more or less, a black-and-white issue. An open letter sent last year by its four major institutions — Wernick and Schonfeld’s, plus its two major rabbinical schools — asserted that while the movement wants to welcome interfaith couples, the blanket ban on rabbis performing intermarriages would stand.

“We affirm the traditional practice of reserving rabbinic officiation to two Jews,” the letter read, adding that the movement’s leaders “are equally adamant that our clergy and communities go out of their way to create multiple opportunities for deep and caring relationships between the couple and the rabbi, the couple and the community.”

But change is still in the air. A handful of rabbis have left the movement in order to perform intermarriages, and a larger group has complained that the ban on attending intermarriages alienates them from friends and family with non-Jewish spouses. Last year, the United Synagogue voted to allow its congregations to accept non-Jewish partners as full members.

Now, one of the rabbis who has agitated for a policy shift has been nominated by the Rabbinical Assembly to be its next vice president. Rabbi Stewart Vogel of Woodland Hills, California, has long sought ways to include intermarried couples. He announces their anniversaries at Shabbat services, and has honored them at synagogue functions at least as early as 2003.

In a statement to JTA, Vogel wrote, “I have no intention of trying to change the standard on officiating” intermarriages.

Nevertheless, Vogel’s nomination has prompted another rabbi, Felipe Goodman of Las Vegas, to challenge Vogel for the spot, as the Forward first reported. Goodman feels that too much focus has been put on the issue by Conservative leaders. He opposes allowing rabbis to ritually recognize intermarriages.

“If we start to play that game, the lines will start to become blurry very, very soon,” Goodman told JTA. “We need clear lines.”

He added: “I’m obviously worried, yes. I’m worried the movement could be moving in that direction, and I want to do what I can to make sure it doesn’t.”

Rabbi Debra Newman Kamin, who next month will be installed as president, the top lay position, of the Rabbinical Assembly, said the R.A.’s position on officiating is not changing.

She acknowledged that the movement’s Committee on Jewish Law and Standards is debating whether to amend the ban on rabbis attending intermarriages, but said last year’s open letter on officiation was clear.

“That letter, we thought, really was a definitive statement,” she said. “Given that everything that’s coming out publicly has restated time and time again that we’re not changing the standard on officiation, I’m surprised that our membership seems to think that that is something that is changing.”

The anxiety over the officiation ban stems in part from fears about the movement’s future as a whole. Studies have shown that the number of Conservative Jews in the United States has shrunk from more than a third of Jewish families in 1990 to less than a fifth. The number of synagogues affiliated with Conservative Judaism, once the dominant denomination, has also fallen.

Speaking to JTA, rabbis listed a raft of complaints with Conservative umbrella institutions: They aren’t responsive enough to synagogues outside New York. They don’t engage rabbis enough. They aren’t sufficiently sensitive to the challenges faced by Conservative congregations outside the United States. They haven’t invested enough in their youth programming.

“It’s never easy to maintain the middle,” said Rabbi Jason Miller, a technologist and part-time pulpit rabbi from the Detroit area. “People today are choosing the extremes, whether it’s politics or religion. In terms of waving the banner of Conservative Judaism that followers throughout North America can be proud of, that has been a failed effort.”

Speaking to JTA, Wernick listed a number of reasons for optimism. He is proud of United Synagogue Youth, the movement’s youth group, which brought hundreds of kids to last week’s marches in Washington, D.C., and New York advocating gun control. And he said the United Synagogue’s strategic plan is transforming the group from a membership association into a platform for a vibrant, committed and innovative Judaism.

In her letter announcing that she was stepping down, Schonfeld said she had helped the Rabbinical Association become more responsive to its members. She is also proud of the association’s Lev Shalem series of prayer books, beginning in 2010, which offer fresh translations, an array of commentaries and readings meant to appeal to diverse audiences.

“How do you become a network of people who have shared goals and shared practices around a centrist Jewish religious movement that values Jewish ritual as a meaningful framework for Jewish experience?” asked Wernick, offering the question that has guided the organization’s planning process. “It’s an authentic and dynamic Judaism. It’s authentic because it’s a commitment to tradition and ritual. But it’s dynamic because of its willingness to reshape it for modernity.”

But some rabbis say that the movement needs to be more open-minded in accepting the multiplicity of Jewish families, whether they have two Jewish partners or not. Rabbi Adina Lewittes, who left the Rabbinical Assembly in 2013 to perform intermarriages, said the movement needs to think more seriously about change.

“I think the intermarriage question is today’s most urgent issue that is challenging the movement’s sense of cohesion,” Lewittes said. “This is an historic opportunity. And I really hope that it’s taken because I think the Conservative movement has a lot to offer in today’s world — a world that is struggling to understand how to stay rooted even as we move toward growing complexity and diversity.”