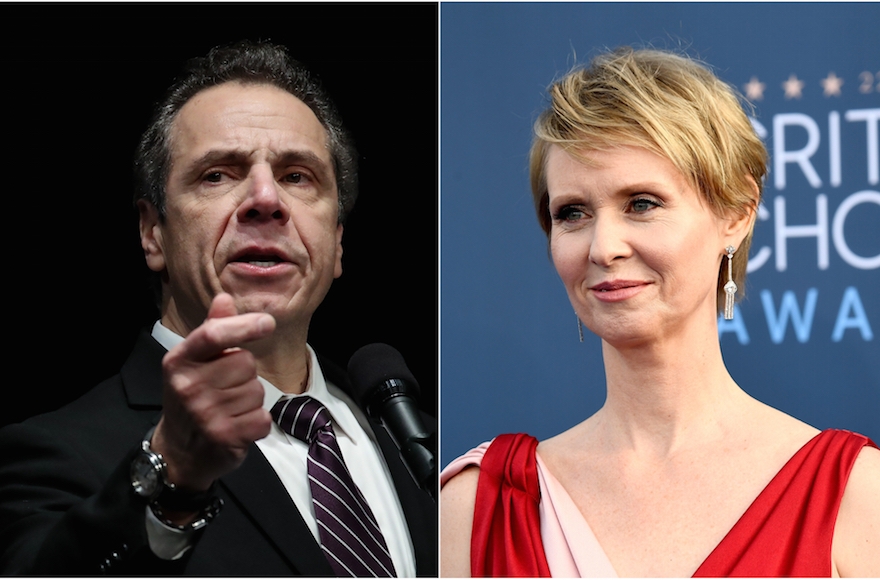 That was when Sen. Bernie Sanders argued that Israel used “disproportionate” force against Hamas terrorists in 2014 and Hillary Clinton replied that Hamas had erected a “terrorist haven.”

The two presidential contenders rocked New York politics as Sanders spoke openly about the plight of Palestinians in the Gaza Strip and ripped into Israel for excessively responding to Hamas’ steady stream of rocket attacks on Israel’s civilian population. Never before in New York could anyone recall such a left-wing stance on Israel being articulated during a presidential campaign.

And it may happen again in the state’s race for governor.

The entry this month of actress Cynthia Nixon against incumbent Andrew Cuomo for the Democratic nomination raises the possibility of a faceoff over Israel and the Palestinians.

Nixon, who has been described as an impassioned liberal who would lead from the left, is challenging Cuomo’s progressive bona fides. Jewish voters might find it appealing that she has close ties to Manhattan’s Congregation Beit Simchat Torah and that Nixon, who is not Jewish, is raising her two eldest children from her first marriage as Jews.

But she will also have to defend to critics her decision in 2010 to sign a petition in support of Israeli artists who were refusing to perform in the Israeli West Bank settlement of Ariel.

That will make Israel a factor in the election for Jewish voters, predicted Hank Sheinkopf, a Democratic political consultant who is not aligned with either candidate.

Sheinkopf said that although Nixon “probably believes she will win the East Side and the West Side, she should rethink that because the Jews there are mostly Israel supporters and not boycotters. A boycott is a boycott and that is what she supported, whereas Cuomo has been against BDS and is pro-Israel.”

Cuomo in July 2016 signed the first-in-the-nation executive order directing state entities to divest all public funds from any organization or group that supports the Boycott, Divestment and Sanctions campaign against Israel. 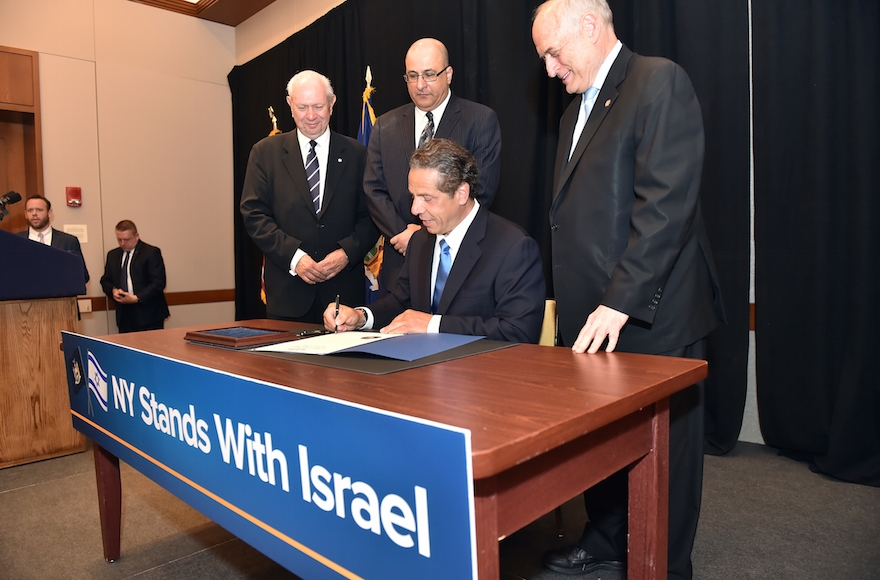 Nixon’s defenders say that calling for a boycott limited to a West Bank settlement is not the same as support for the broader BDS movement.

Rabbi Jill Jacobs, executive director of T’ruah: The Rabbinic Call for Human Rights, said that as “someone who believes that being pro-Israel requires working to end the occupation and to create a two-state reality, I view signing a letter in support of Israeli artists who oppose BDS and who do not wish to perform in the occupied territories to be a pro-Israel action.”

She added in an email that Israel “should not be a major issue in the gubernatorial race, since New York state does not make its own foreign policy. Jews, like other New Yorkers, will consider a range of state-based social and economic issues when decided how to vote.”

Political activists say Cuomo continues to enjoy the support of the Jewish community, which could prove decisive in a close election because of the usually large Jewish voter turnout.

“Jews tend to support mainstream Democratic candidates,” said Larry Levy, a Long Island political expert and former Newsday political columnist. “They will go with those who are best known to them, whose views are considered moderate and who have shown the proper amount of deference to Israel.”

In addition, noted author Alan Skorski, “the Jewish community has always had a comfortable relationship with the Cuomo family.”

Cuomo is running for his third term as governor. In a January poll by Siena College, he had a strong favorability rating of 76 percent among Democrats — a figure that slipped to 53 percent last month perhaps because of the corruption trial of his former top aide, Joseph Percoco. A February Quinnipiac poll found that 47 percent of New York voters approved of his job performance.

Analysts believe Cuomo may be vulnerable from a credible opponent, pointing out that his 2014 Democratic primary challenger, Zephyr Teachout, a relatively unknown academic, amassed 34 percent of the vote.

But political consultant Bruce Gyory has been quoted as saying that Cuomo has strengthened his progressive credentials in the past four years, appeasing some left-wing critics with his ban on hydraulic fracturing.

“He has been a strong supporter of Israel and the Jewish community, and he has the same advantage that most incumbents in New York will have. Ms. Nixon has to be able to articulate her reasons why she is running,” he said. “If she is running to the left of the governor, she has to convince voters why he is not progressive when he has a very progressive record.” 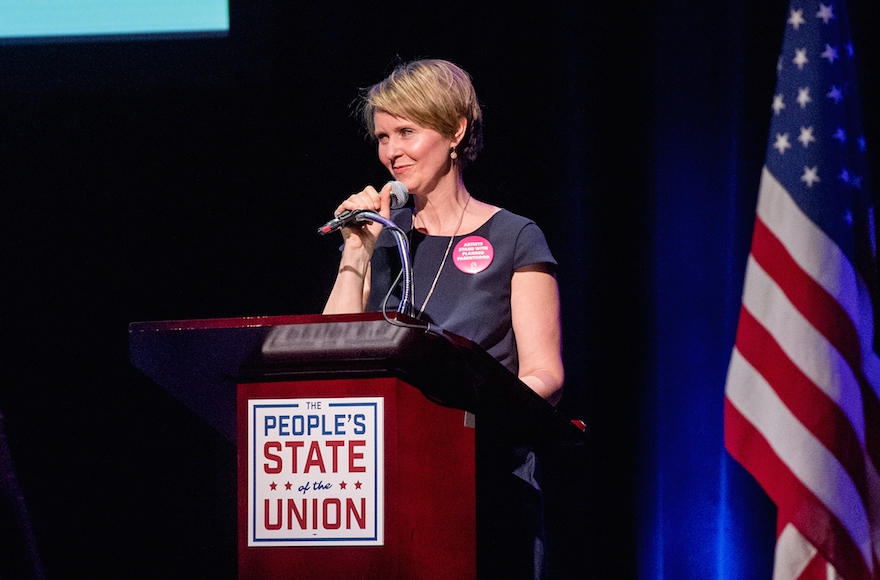 Nixon’s name recognition might be expected to give her a boost because of her starring role as Miranda in HBO’s “Sex and the City.” But the Siena poll released last week found that she is far from a household name. In fact, Cuomo led Nixon in that poll by 66 percent to 19 percent among New York Democrats. And it found that her favorable rating was only 20 percent — with 19 percent having an unfavorable view. The remaining 60 percent had no opinion.

“That’s bad because she will have to spend some time building up her name recognition in a way that a celebrity candidate often doesn’t have to do,” Levy said. “But the good news is that she has a chance to define herself.”

Law professor Alan Dershowitz has criticized Nixon for signing the boycott petition, charging her with “bigotry” and noting that the petition was initiated by the far-left Jewish Voice for Peace. Among the 150 American actors, writers, directors and other artists who signed, he said, is Vanessa Redgrave, a vocal supporter of the Palestine Liberation Organization and a critic of Israel and “Zionist hoodlums.”

Others were actors Theodore Bikel and Mandy Patinkin, as well as playwright Tony Kushner.

“Jewish Voice for Peace has a benign name but a malignant agenda — ending Israel as the nation state of the Jewish people,” Dershowitz told The Jewish Week.

(The organization itself says it is in favor of any solution that supports the national rights of both Jews and Palestinians.)

“I don’t care if it’s Mandy Patinkin or anybody else who signed the petition circulated by this horrible anti-Zionist organization Jewish Voice for Peace,” Dershowitz said. “It shows either the worst judgment or the worst form of bigotry; it is no defense to say other Jews did it. … Does she not believe in Israel’s right to exist?”

Nixon did not respond to numerous phone calls and messages left with her representatives.

Dershowitz’s critical views of Nixon were echoed by Leon Goldenberg, a Democratic activist in Brooklyn.

“Anyone who supports BDS is a bigot,” he said. “If you only pick out one country to boycott and it is the Jewish state, then you are a bigot.”

Smikle said that having to explain her boycott position “will add to her burden to define herself against a very popular and progressive incumbent.”

Bob Liff, a Democratic activist from Manhattan whose children attended school with Nixon’s kids, described her as a “serious woman who was active in the integration fight in the school. She is smart. She is an open-minded woman.”

“I don’t buy that any of that reflects on her qualifications or lack thereof to be governor,” he said, adding that “to try to put some kind of anti-Semitic cast on the Nixon campaign is really a reach.”

(Stewart Ain is a staff writer for The New York Jewish Week, where a version of this story first appeared.)