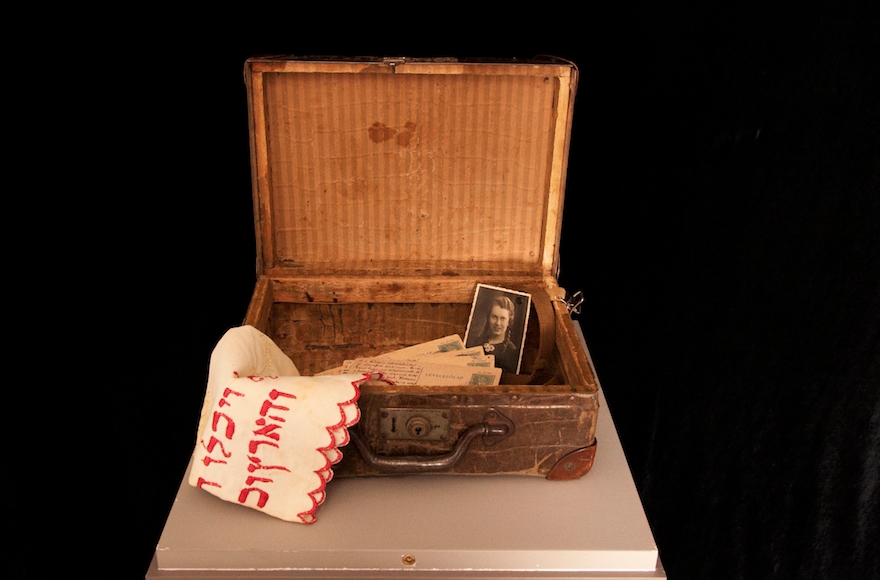 A small suitcase taken to the Budapest ghetto by a family named Horowitz, holding family photos, postcards and a challah cover, is on display at the Amud Aish Memorial Museum in Brooklyn, New York. (Courtesy of Amud Aish)
Advertisement

NEW YORK (JTA) — Like Holocaust museums the world over, the Amud Aish Memorial Museum in Brooklyn focuses on European Jewish communities that thrived before the Nazis came to power, the killing machine that led to millions of deaths, and the resilience of survivors both during the war and in rebuilding their Jewish lives in the aftermath.

But the small museum also has a particular focus: telling the story of the Shoah through the eyes of Orthodox Jews. Its current exhibit, for example,  focuses on Jews who escaped to Shanghai in the 1930s — a familiar story in which 20,000 Jewish refugees fled to the Japanese-occupied area, one of the few safe havens in the world that did not require a visa.

But the Amud Aish display includes photos and documents from the Bais Yaakov school in Shanghai, an affiliate of the Orthodox girls school movement that originated in Europe and spread to America. The exhibit also documents how students from the famed Lublin Yeshiva in Poland made a monthlong walk to Vilna, Lithuania, before proceeding to Shanghai.

“I felt that the Orthodox community’s story throughout the Holocaust is really not that well-documented and there’s a lot to be mined in that story,” said the museum’s director, Rabbi Sholom Friedmann. “We’re looking at how these Jews during the worst of times looked to their faith, looked to Jewish law as a means to make some sort of meaning out of their experience, and to be able to move forward and have the resilience that they did.” 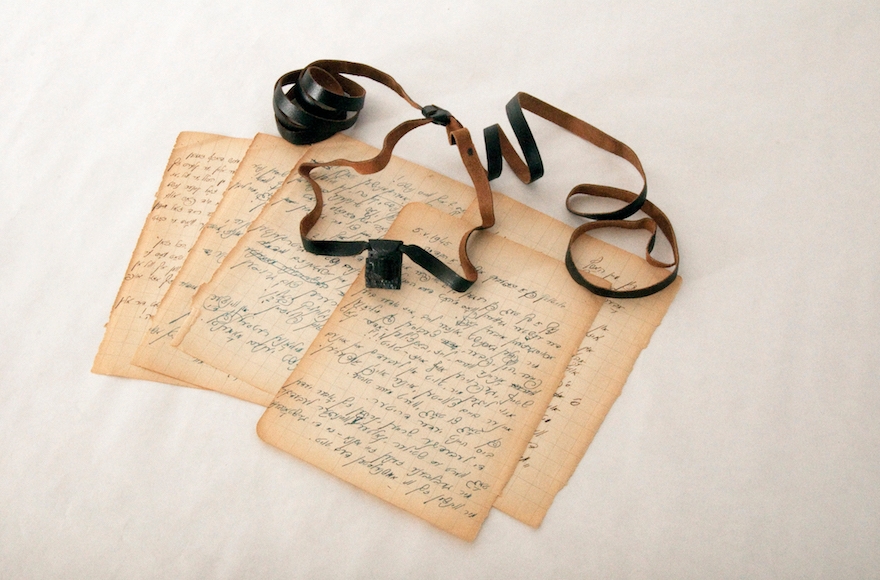 A set of tefillin and diary pages belonging to Isaac Avigdor, a young Polish rabbi imprisoned at Mauthausen, are on display at the Amud Aish Memorial Museum. Avigdor shared the smuggled tefillin with other inmates during his imprisonment. (Courtesy of Amud Aish)

Located in the decidedly non-Orthodox neighborhood of Mill Basin, Amud Aish is housed in the headquarters of The Americare Companies, a home health care provider owned by Elly Kleinman, who serves as president of the museum. There are no visible signs in or on the five-story office building alerting visitors that they have arrived at the museum. A receptionist in the lobby buzzes people into the ground-floor museum, which includes a 1,000-square-foot exhibition space. Visits are by appointment only.

Amud Aish is Hebrew for “pillar of fire,” a reference to the flames that guided the Jews at night as they wandered the desert during the Exodus from Egypt. The museum’s mission statement declares that “the lessons of the Holocaust are a guiding light for us.” Friedmann, a Detroit native who completed a fellowship in Holocaust education at the Imperial War Museum in London, came up with the name.

The museum is staffed mostly by the children and grandchildren of Holocaust survivors, including Kleinman, its founder, and Friedmann, the son of a Belgian Holocaust survivor. Other members of the nine-person staff include acquisitions curator Chavi Felsenburg, whose grandmother was a hidden child and whose grandfather survived six concentration camps; collections manager Perachya Sorscher, whose grandfather managed to get extra food to the Satmar rebbe in the Bergen-Belsen concentration camp; and chief curator Henri Lustiger-Thaler, whose mother was liberated from Bergen-Belsen.

“I feel like I’m doing something that they would be very proud of and very, very meaningful to our family,” said Felsenburg, whose acquisitions include a rescue plea written on a piece of coat lining and smuggled out of a ghetto in southern France.

“We actually had known that such a plea was sent out,” she said of the document, which was rolled up and disguised as a cigarette. “We were re-housing a collection, putting it into sheet protectors and there it is. I did not expect to see it just like that, by flipping pages.” 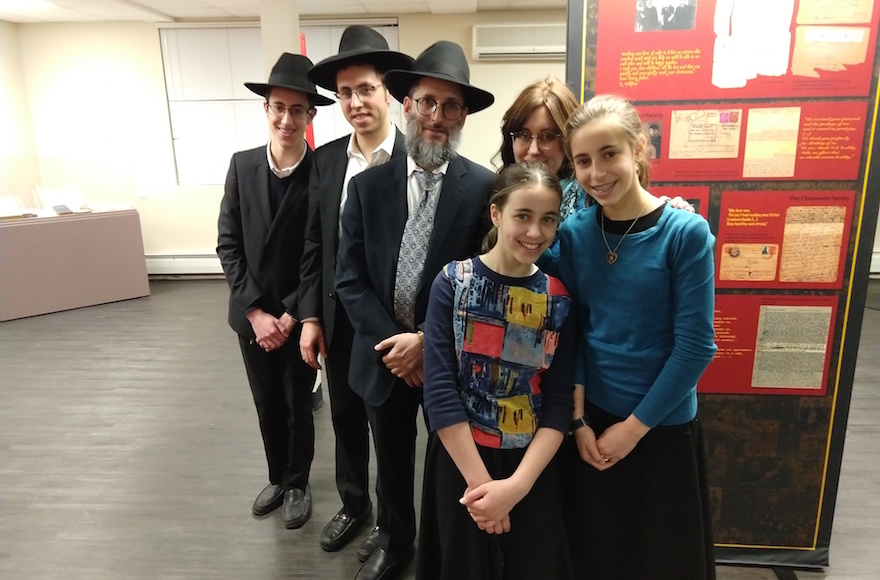 Yehuda and Breindy Gelbfish of Lakewood, New Jersey, who visited the Amud Aish Memorial Museum recently with four of their 10 children, loaned a number of items that belonged to Yehuda’s father Benjamin, a Lublin Yeshiva student who fled to Vilna, Lithuania. (Jon Kalish)

Friedman said Amud Aish has a large collection of documents pertaining to Orthodox rescue efforts. This includes  documents  related to the rescue activities of Solomon Schonfeld, a British rabbi who saved thousands of Jews, many of them children, by arranging for South American travel papers, kindertransports to England and temporary refuge in various British territories. His efforts were conducted under the auspices of the Religious Emergency Council, which was created by Schonfeld’s father-in-law, Joseph Hertz, the chief rabbi of England.

Friedmann concedes that museums do not play a big role within the Orthodox community.

“We’re introducing the legitimacy and the power that a museum can bring as an educational resource,” he said.

Amud Aish also has the papers of Mike Tress, a Brooklyn businessman who was the grandfather of Rabbi Dovid Reidel, a Bobover chasid who serves as the museum’s director of research and archives. The Tress Collection, like some of the other donations, had been sitting in an attic or basement for 60 years.

“After the invasion of Poland, he gives up his business, he throws himself full force into trying to rescue Jews,” Reidel said of his grandfather. “He’s using his personal money, he’s selling his stocks to put that money into those rescue efforts.”

Tress made weekly trips from his home in Brooklyn to Washington, D.C., where he met with first lady Eleanor Roosevelt and officials at the State Department. Reidel said his grandfather violated the prohibition against travel on the sabbath because his mission involved “pikuach nefesh,” the saving of a human soul.

One Saturday Tress joined Jacob Rosenheim, president of the umbrella group for Orthodox Jewry, Agudath Israel, at the State Department. They were desperate to get a visa to the U.S. Embassy in Moscow for Rabbi Aharon Kotler, an Orthodox Jewish leader in Lithuania. The way Reidel tells the story, Breckenridge Long, an assistant secretary at the State Department, was convinced of the gravity of the situation because these Orthodox Jews were willing to violate their sabbath, and he intervened. Kotler made it out of the Soviet Union and went on to found Beth Medrash Govoha in New Jersey, also known as the Lakewood Yeshiva, which is thought to be the largest yeshiva in the world.

One of Amud Aish’s most precious objects is a book in which the Chevra Kadisha, or burial society, at Bergen-Belsen recorded deaths and burials of the concentration camp’s survivors who died after the camp was liberated. The Chevra Kadisha at Bergen-Belsen, established right after it was liberated, was organized by a rabbi who served as a chaplain in the British Army. The book was donated by the relative of a camp survivor who was part of the burial society.

Also of great value in the museum’s collection are the hundreds of responsa — rabbinical decisions in response to legal and moral questions submitted by Jews.

“The responsa tell us what questions [observant] Jews were struggling with,” said Michael Berenbaum, who served as the project director during the creation of the U.S. Holocaust Memorial Museum in Washington, D.C., and was involved in the establishment of Steven Spielberg’s oral history project, now known as the Shoah Foundation-The Institute for Visual History and Education.

Asked whether a separate museum is needed to focus on the Holocaust through the eyes of the Orthodox, Berenbaum replied: “A museum is not an encyclopedia, therefore it has to tell a certain story. And by virtue of telling a certain story, it omits other stories. This [Amud Aish] is a corrective part of the story.”

Berenbaum does see some thorny issues the new museum may encounter, including the matter of Jewish children who had been living as gentiles with gentile families. Although he praised the Orthodox for doing a heroic job of reuniting these children with the Jewish people, there is what he termed “an interesting value tension” when considering what was in the best interests of the child in such situations. 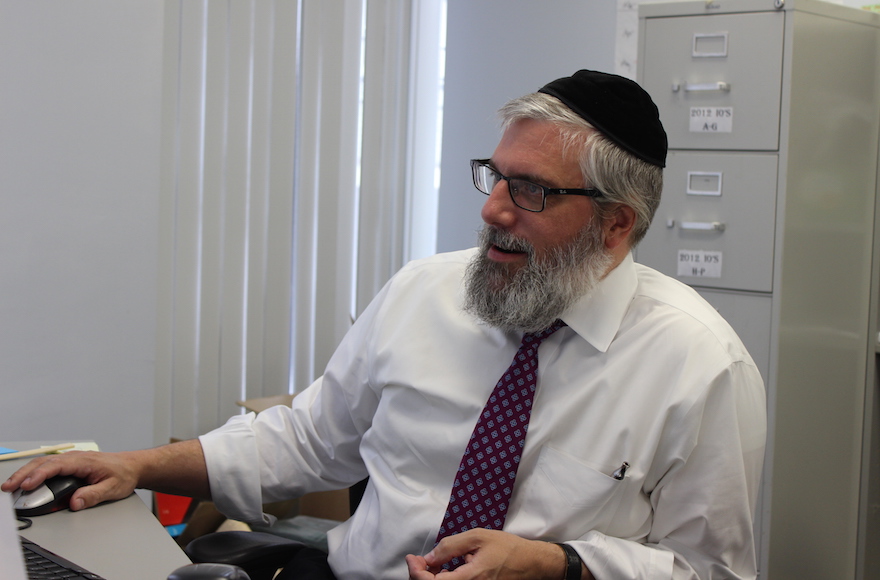 Rabbi Sholom Friedmann, director of the Amud Aish Memorial Museum, is like many of its staff a child of a Holocaust survivor. (Jon Kalish)

Another challenge is grappling with the dynamics of the Holocaust’s impact on religious belief.

Like many Orthodox institutions, the museum neither endorses nor formally rejects Yom Hashoah, or Holocaust Remembrance Day, which begins this year on the evening of April 11. Friedmann says the museum will participate in other people’s Yom Hashoah events.

The Shanghai exhibit drew Yehuda and Breindy Gelbfish of Lakewood, who brought four of their 10 children. Gelbfish is the son of the late Benjamin Gelbfish, one of the Lublin Yeshiva students who fled to Vilna.

Yehuda Gelbfish has loaned Amud Aish a number of items, including a yellow receipt good for a meal at a soup kitchen in Vilna in 1939. The ticket went unused because Benjamin Gelbfish was called in by Russian authorities for questioning about his visa application. The Gelbfish patriarch compulsively held on to documentation, including a ticket booklet for the Trans-Siberian Railway and a laundry ticket. The elder Gelbfish did make it to Shanghai. After the war, Benjamin Gelbfish made a living as a watchmaker and jewelry manufacturer. He died in 2008.

“God was always on his lips,” Yehuda Gelbfish said of his father. “God gave him the ability to persevere.”

Asked why he lent his father’s documents to Amud Aish, Gelbfish replied, “We’re transmitting not only the lives of those who perished but more than anything else we’re transmitting the way life continues. And the way survivors rebuilt their lives. That’s what this museum’s about.”