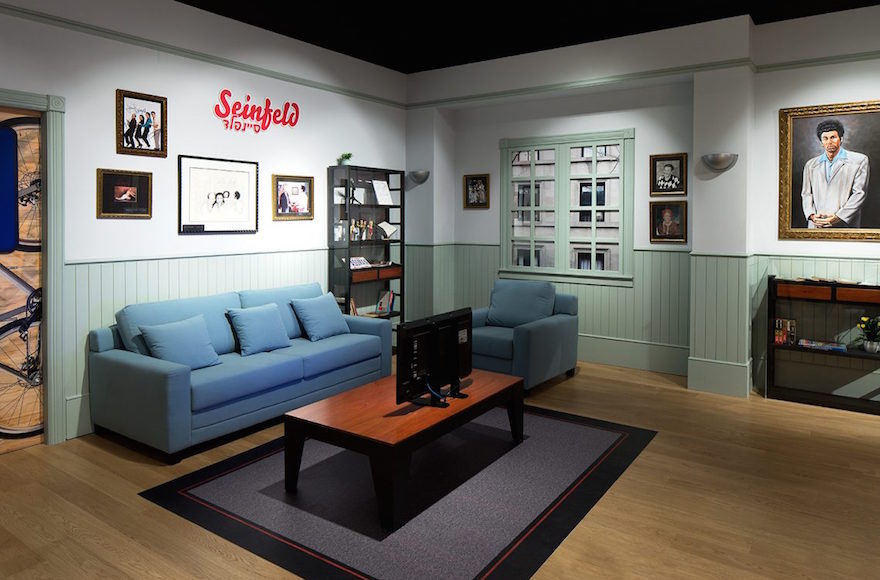 This story is sponsored by the American Jewish Press Association.

(JTA) — Stop me if you’ve heard this one: “Simi bar Chiya said to Rav, ‘As they say, camels in Medea can dance in a small jar; here is a jar and here are camels and here is Medea, and they are not dancing!'”

If this were the second century C.E., when this wry dialogue from the Talmud was supposed to have taken place, you might be cracking up. Suffice it to say that Jewish humor did not start with Sholem Aleichem or end with Jerry Seinfeld.

As a new exhibit at Beit Hatfutsot: The Museum of the Jewish People makes clear, Jewish humor is an alternative lens through which to view the diversity — and continuity — of Jewish life around the world.

Since 1978, the Tel Aviv museum has offered visitors a dizzying tour of the varied Jewish experience over two millennia of dispersion across the globe.

With the core exhibition now shuttered as Beit Hatfutsot undergoes its first comprehensive overhaul in four decades, the museum known informally as the Diaspora Museum has opened an exhibition, three years in the making, that highlights the breadth of Jewish humor across a wide swath of historical eras and cultural contexts, from the silly folktales of Chelm to the pointed political comedy of Lenny Bruce.

“The Museum of the Jewish People at Beit Hatfutsot is the only museum in the world to tell the story of all Jewish people,” Irina Nevzlin, chair of the museum’s board of directors, said in a news release. “It is a place of positive, optimistic and future-oriented Jewish identity, and, as such, it’s the perfect place for a Jewish humor exhibition.”

“Let There Be Laughter: Jewish Humor Around the World” brings together the personal affects of the great Jewish comedians, samples of the humor of Woody Allen and the Marx Brothers, and examples of French, Moroccan, Russian and other lesser-known subtypes of Jewish hilarity. It features an original film, “The Standups,” with well-known Israeli comedians sharing childhood stories. And it includes a number of interactive exhibits that lets visitors get hands-on with Jewish humor.

“We understood that humor is really a way that connects all the Jewish people from around the world,” said Asaf Galay, one of the exhibition’s curators.

To Galay, humor is among the things that unites a diverse global Jewish community. Distinctly Jewish forms of humor, though often difficult to define precisely, nevertheless have common themes that transcend geography and culture. And humor is one of the central ways Jews identify as Jewish. According to the 2013 Pew survey of American Jews, 42 percent of respondents said having a good sense of humor is essential to their Jewish identity.

As with the perennial question of what constitutes Jewish literature — is it the writings that Jews create or is it a distinct genre with its own particular features and themes? — the exact parameters of Jewish humor are a matter of debate. Galay is firm in his view that Jewish humor has distinct features and recurring themes that are evident across the world. 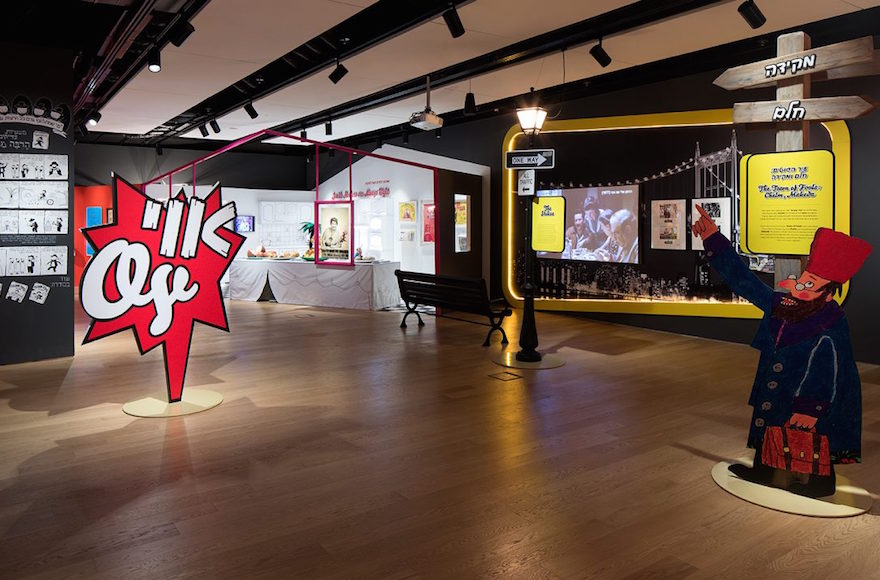 A view of “Let There Be Laughter: Jewish Humor Around the World,” a new exhibit at Beit Hatfutsot: The Museum of the Jewish People in Tel Aviv. (Courtesy of Beit Hatfutsot)

Among those distinct features are certain recurring archetypes: the Jewish mother who feeds and protects (often excessively); the shlimazel, a sort of distinctly Jewish bumbler; the shiksa, or gentile woman, who both tempts Jewish men and shows up lapsed Jews; and the notorious, some would say misogynistic, Jewish American Princess.

There are also thematic continuities to Jewish humor across the world, especially the Jew as an anti-establishment outsider who mocks the conventions of the mainstream, as evidenced by the bottomless trove of rabbi, priest and imam jokes.

“From my research, I found out that in all the Jewish communities there was a very similar kind of humor,” Galay said.

Rachel Druck, the editor of the museum’s communities database, lists “humor as self-defense,” “humor of internal criticism” and “humor as a way in” in a blog post about the ways humor has served the Jewish people over the centuries.

In the United States, Jewish humor has helped define the comedic mainstream, as apparent from the enormous success of “Seinfeld,” the films of Woody Allen and Mel Brooks, and the routines of female comics from Fanny Brice to Sarah Silverman. Less well-known is that something similar transpired in Russia. Arkady Raikin, a Latvian-born Jew, was a legendary Soviet comic who managed to ridicule the inefficiencies and corruption of the communist regime despite the tight control its censors exercised over cultural expression. And the satirical magazine Krokodil, a Soviet analog of Mad magazine, was led by Jewish editors for decades, Galay said. 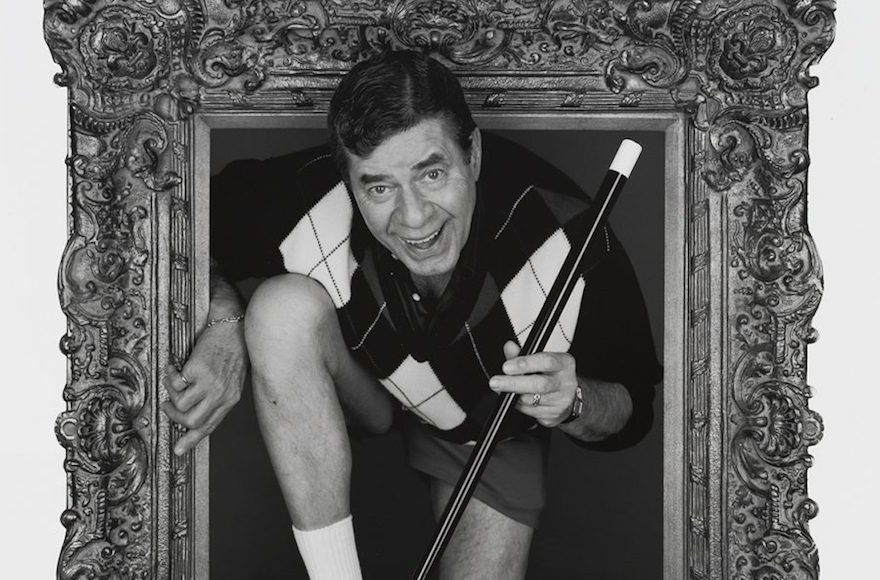 The exhibition is designed to be highly interactive. Visitors will be able to record themselves telling a Jewish joke on a makeshift comedy club stage that they can then upload to social media. A slot machine allows users to push a button and hear Jewish jokes about God and rabbis. Video clips show the various ways that Jewish references have seeped into the broader comedic culture, including the famous scene from “The Big Lebowski” in which Walter Sobchak grumbles about being “shomer f***ing shabbos,” and Mel Brooks portraying Moses in “History of the World, Part I.”

Then there are the artifacts. The exhibition includes a publicity photo from the 1979 Woody Allen film “Manhattan,” a 1970 record album from the Israeli comedy troupe HaGashashim and volumes of Jewish jokes in Russian, German and Japanese.

But “Seinfeld” gets something of the royal treatment. The exhibit features an approximation of Jerry’s living room, complete with a portrait of Kramer made famous in the 1992 episode “The Letter.” Visitors can feast their eyes on a range of other paraphernalia from the 1990s megahit, including the original shirt worn by the Soup Nazi signed by Larry Thomas, the actor who played him.

The exhibit, which will run until 2020, is intended in part as an alternative draw while the museum’s core exhibition undergoes renovation. The core exhibition is slated to reopen in 2019.

(This article, sponsored by the American Jewish Press Association, was produced by JTA’s native content team.)