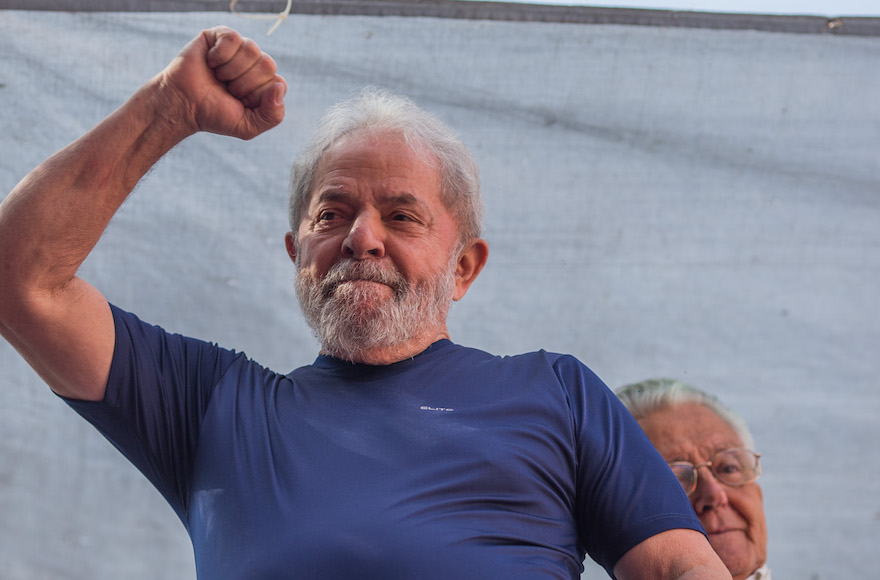 RIO DE JANEIRO (JTA) — A Brazilian rabbi who supported an iconic ex-president convicted of corruption has apologized after being slammed for acting as if he represented the Jewish community.

Rabbi Alexandre Leone has been under fire since the release of videos and photos of him protesting on a sound truck in favor of Luis Inacio Lula da Silva, whose refusal to turn himself in to begin his prison sentence became a media spectacle that mobilized Latin America’s largest nation over the weekend.

“Leone exposed the whole Jewish community for speaking in the name of the Jews without asking permission,” according to a statement sent by the Brazil-Israel Zionist Association to JTA. “Being a Jewish humanist cannot mean joining people who are against Israel and the Jews and that’s what he did by exposing himself and us next to a Palestinian flag, while Israel is forced to risk the lives of its soldiers to save the nation from terrorist attacks.”

Wearing a kippah, Leone and other Jewish activists addressed thousands during a so-called ecumenical event held Friday evening by Lula’s Labor Party at his political nest in Sao Bernardo do Campo. Lula, 72, defied a 5 p.m. deadline to report to prison to begin serving a 12-year corruption sentence.

“Freedom and justice are essential values for us Jews. We suffered with Nazism in Gemany, and we now feel the smell of fascism in Brazil,” said another Jewish activist standing next to Leone. “If Lula is being wronged, we Jews are being wronged. Lula is our Moses, he forged the Brazilian people. He made us cross a Red Sea to achieve our freedom.”

Leone, a Conservative rabbi ordained by the Jewish Theological Seminary in New York, has served as spiritual leader of a small community in the Sao Paulo suburb of Alphaville since 2005. An activist for human rights and interfaith dialogue in Brazil, he apologized in a video published on social media early Tuesday.

“My decision to participate was misguided. I have exposed my community unnecessarily. I apologize to all those from the Jewish community that felt offended,” Leone said. “I identity myself with humanist ideals. That’s why I accepted to participate in an interfaith act with a message of peace and democracy. But I have learned that things can easily get out of control.”

Lula turned himself over to police custody on Saturday. He maintains his innocence and argues his corruption conviction was simply a way for enemies to make sure he does not run — and possibly win — re-election in October.

Lula governed Brazil from 2003 to 2010, leaving office an international celebrity and with approval ratings in the high 80s. When visiting Israel in 2010, he refused to visit the tomb of Theodor Herzl and, only a few days later, placed flowers on the grave of Palestinian leader Yasser Arafat.