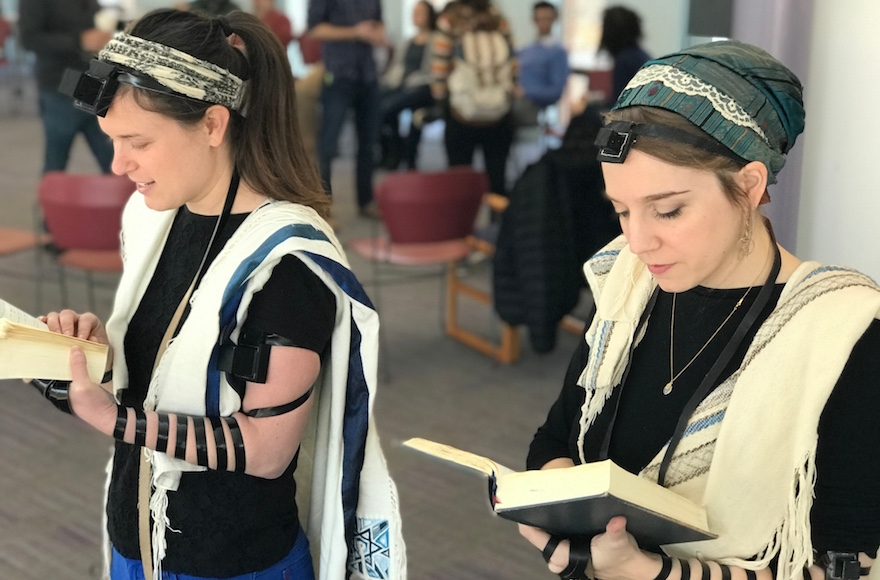 (JTA) —  Rachel Putterman never learned how to put on tefillin when she was younger, so when she enrolled in rabbinical school, she consulted with fellow students. But the 52-year-old couldn’t quite get the hang of how to properly align the leather straps and tiny boxes of the phylacteries, which Jews are commanded to bind on their arm and forehead during weekday morning prayers.

She went looking for tutorial videos on YouTube, but was disappointed to see that many of the videos featured only men.

“It was just upsetting to me that there was nobody that looked like me. It seemed like a glaring gap,” Putterman, a student at Hebrew College, a pluralistic rabbinical school near Boston, told JTA in a phone interview on Monday.

She also noticed that many of the video tutorials were not shot professionally and were of poor quality. Putterman decided to change that.

Last month, the former public interest lawyer set up a fundraising page for money to produce a high-quality video featuring a diverse group of people showing how to wrap tefillin. The video, which Putterman is directing and fellow Hebrew College rabbinical student Gita Karasov is producing, will be called All Genders Wrap and include a diverse group of 10 people, including women and men of various ages, ethnic and racial backgrounds, as well as transgender and gender-nonconforming Jews.

“I want to make a statement to counter what you see when you go on YouTube, that there are people of all genders engaged in practice,” said Putterman, who enrolled in Hebrew College as a part-time student in 2013 and is now a third-year full-time student.

Though she initially received a positive response from members of the Hebrew College community, she was not sure if the project would resonate with a larger audience.

“My instinct was that this was going to strike a chord within a small subset of the Jewish community: the part of the community that is interested in laying tefillin but not the Orthodox,” she said.

Tefillin have traditionally been worn almost exclusively by men, and most Orthodox congregations continue to follow that practice. However, many non-Orthodox synagogues encourage both men and women to strap on the leather boxes, which contain handwritten parchments with texts from the Torah, during prayer.

Putterman’s instinct turned out to be right — she surpassed her goal of $5,000 in eight days, with over 100 people donating to her project. The flood of donations was both “affirming” and “overwhelming,” she said.

She will use the money to hire a professional crew (the cast is made up entirely of volunteers) to shoot and edit the video. Putterman hopes to release the video in September, and also plans to launch a website that will feature the personal stories of each of the 10 instructors.

Putterman said that making the video was a way for her to unite her passions for feminism with her Jewish practice.

“I’ve been a feminist activist my whole life, and I’ve done a lot of research around these issues and writing about it,” she said, “but there’s something so profoundly satisfying about this visual imagery of non-cis[gender] men wearing this stuff, and not just wearing it but engaged in the practice.”