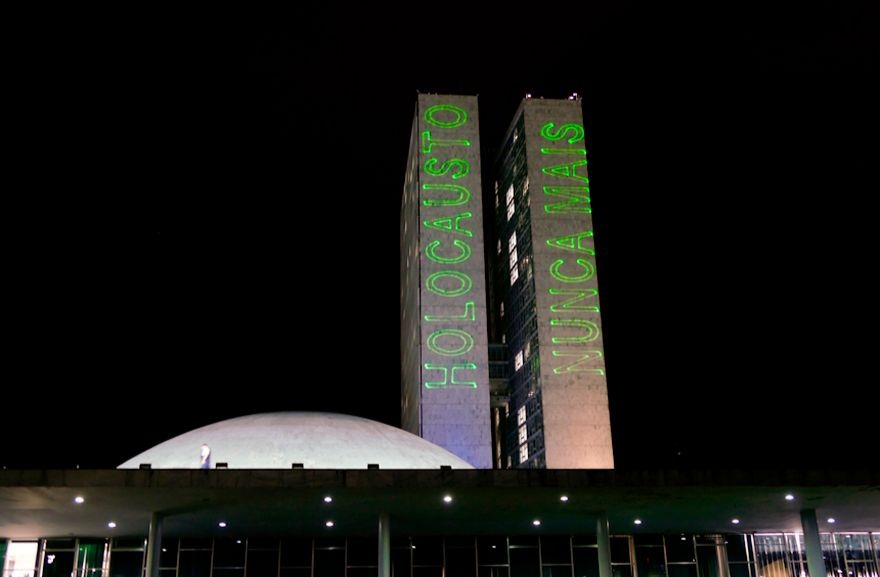 A message for Yom Hashoah, or Holocaust Remembrance Day is laser-projected on the National Congress buildings in Brasilia on April 11, 2018. (Roque de Sa/Agencia Senado via Fotos Publicas)
Advertisement

The green block letters covered the 300-foot tall facade of both twin towers of the Congress, Brasilia’s most famous landmark, on Wednesday night for for four hours. The unprecedented honor to mark Holocaust Remembrance Day in the country’s capital city was led by Sen. Davi Alcolumbre, who is Jewish, and the Curitiba Holocaust Museum.

“Brazil is a welcoming homeland where Jews live in freedom and without the fear of anti-Semitism that unfortunately reappears in several countries of the world. The National Congress was illuminated by a beautiful message,” said Fernando Lottenberg, president of the Brazilian Israelite Confederation, the country’s umbrella Jewish organization, which also promoted the event.

The 28-story buildings, which are home to the Senate and the Chamber of Deputies, hosted during the last two weeks an exhibit titled “Shoah – Holocaust: How was it humanly possible?” produced by Jerusalem’s Yad Vashem Holocaust memorial and museum.

“After more than seven decades, we conclude that Nazism was defeated in 1945, but the racial hatred, xenophobia and anti-Semitism are more alive than we could ever imagine,” said Osias Wurman, Israel’s honorary consul in Rio, during a ceremony held in the country’s second largest city.

Last October, the president of Brazil’s chamber of deputies, Rodrigo Maia, was the country’s most senior official to visit Israel in nearly a decade. The visit was agreed upon during a meeting between President Michel Temer and Israeli Prime Minister Benjamin Netanyahu one month before on the sidelines of the United Nations General Assembly in New York.

Temer’s office has been trying to re-establish good ties with the Jewish state after the leftist Worker’s Party of his impeached predecessor, Dilma Rousseff, had an openly anti-Israel platform for 13 years. However, when Netanyahu made the first visit to Latin America by a sitting Israeli prime minister in September, he included Argentina, Colombia and Mexico on his itinerary, but not Brazil.

Brazil is home to some 120,000 Jews. In 2017, some 700 Brazilians made aliyah to Israel, according to the Jewish Agency, which is more than three times the annual average of about 200 new Brazilian immigrants a year and a 45-year record for the South American country.