Nazi SS veterans hold an annual march in Latvia. Here’s how one woman is fighting back. 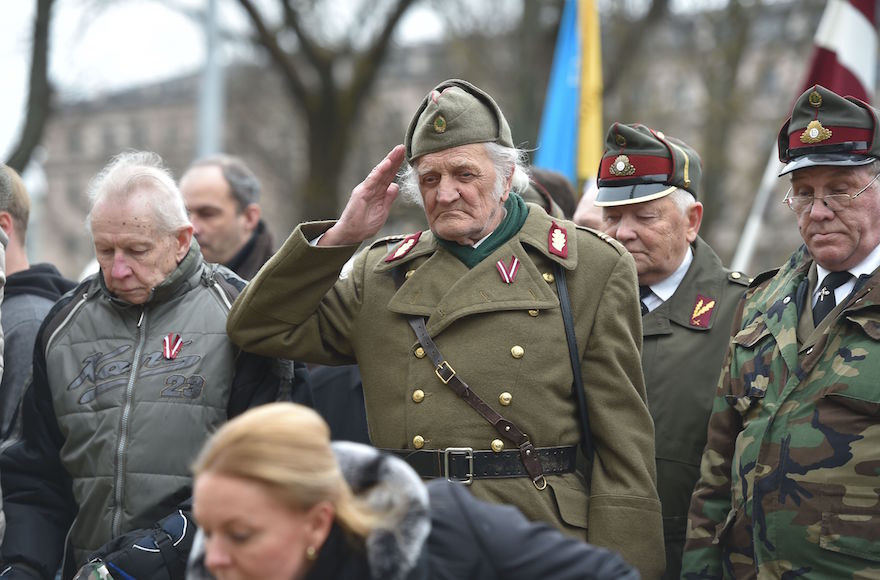 A man dressed in a pre-WWII Latvian military uniform giving a salute as veterans of the Latvian Legion, a force that was commanded by the German Nazi Waffen SS during WWII, and their sympathizers walk to the Monument of Freedom in Riga, Latvia, March 16, 2016. (Ilmars Znotins/AFP/Getty Images)
Advertisement

RIGA, Latvia (JTA) — Each year on March 16, a macabre event unfolds on the square around this capital city’s most famous monument.

Known as the Memorial for Latvian Legionnaires, it is the world’s only march by veterans of Nazi Germany’s elite SS unit.

A handful of them, including nonagenarians in wheelchairs, lead the procession through the Old City to the monument. Some wear the insignia from their old units — the 15th and 19th Waffen Grenadier Divisions — as they receive flowers from young women flanking the procession.

They lay wreaths for their fallen comrades on the monument built in 1935 to celebrate Latvian independence and sing patriotic songs. Hundreds of nationalist activists march or wave Latvian flags from the sidelines under heavy police protection.

Since its advent in the 1990s as a grassroots initiative, the event has prompted intense media interest abroad. Outsiders view it as a sign of how nationalism and hostility to Russia in countries that Moscow once ruled are undermining educational efforts about the Holocaust and the fight against fascism and xenophobia.

The marchers, some of them skinheads wearing fascist symbols, also spark passionate opposition from Latvians who recall how some of the fighters honored were complicit in the murder of Jews. Equally ardent advocates of the march argue that the Legionnaires were either patriots seeking independence from Russia, forcefully conscripted victims of the German Nazis or both.

But throughout the 20-year-old debate over perceived perpetrators, no one had bothered to use the site to remember the victims of the Nazis.

Until 2016, that is, when a non-Jewish Holocaust education professional from Riga — whose great-uncle fought for the Germans — started grassroots commemorations at the monument for murdered Jews, reclaiming the site from the far right.

“In order to make something that belongs to the whole of Latvia, it has to be at Freedom Monument,” Lolita Tomsone, the organizer, told JTA. 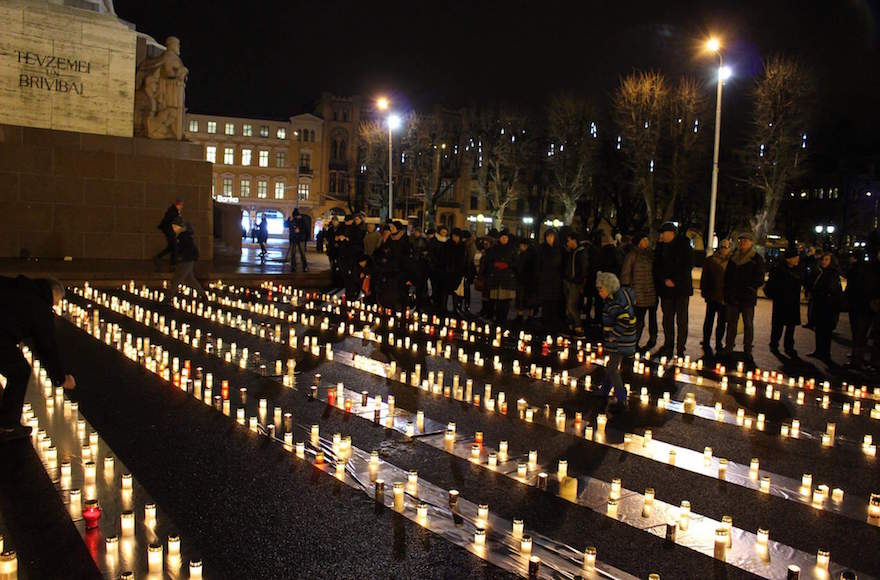 That year and last year, hundreds of participants showed up at Freedom Monument on Nov. 30 – the anniversary of the beginning of the 1941 Rumbula massacre outside Riga. About 30,000 Jews were killed there by the Nazis.

Organizers of the vigil – the first time that Holocaust victims were honored in a ceremony at Freedom Square — picked the site because “it’s the heart of Latvia, it belongs to everyone,” Tomsone said.

Tomsone runs a state-funded museum dedicated to Zanis Lipke, a Latvian who saved Jews during World War II. She said she was inspired to organize the event after seeing the mobilization of Ukrainians around the 75th commemorations in 2015 of the Babi Yar massacre in Ukraine.

“It was moving to see ordinary Ukrainians lighting candles,” she said. “It was all over the news in Ukraine.”

But in Latvia, commemorations of the Rumbula massacre held at the woods where the killings occurred “were a mostly Jewish affair,” said Tomsone, who had lived in Israel for 14 years and studied religion there.

“I wanted to make something that would reflect how the people who were murdered were a loss to the whole of Latvia,” she said.

Tomsone, 43, insists that she did not set up the vigil with the intention of reclaiming Freedom Monument from the nationalists who have made it infamous. But she acknowledged that her actions can be seen as having achieved exactly that.

“It’s kind of this sacred monument and there’s this notion of what you’re allowed to do there, so that’s good to break that stereotype,” she said.

Holocaust historian Efraim Zuroff said the vigil in Riga is part of a recent development in the Baltic states of Lithuania and Latvia. In Lithuania, he said, “we are seeing the first signs of acceptance of the Jews murdered in the Holocaust as an integral part of Lithuanian society and acknowledgement of the highly significant role of all strata of Lithuanian society in Holocaust crimes.”

That’s a new development in a region where growing nationalist extremism features the glorification of Nazi war criminals and downplaying of the Holocaust — often with government support or indifference. 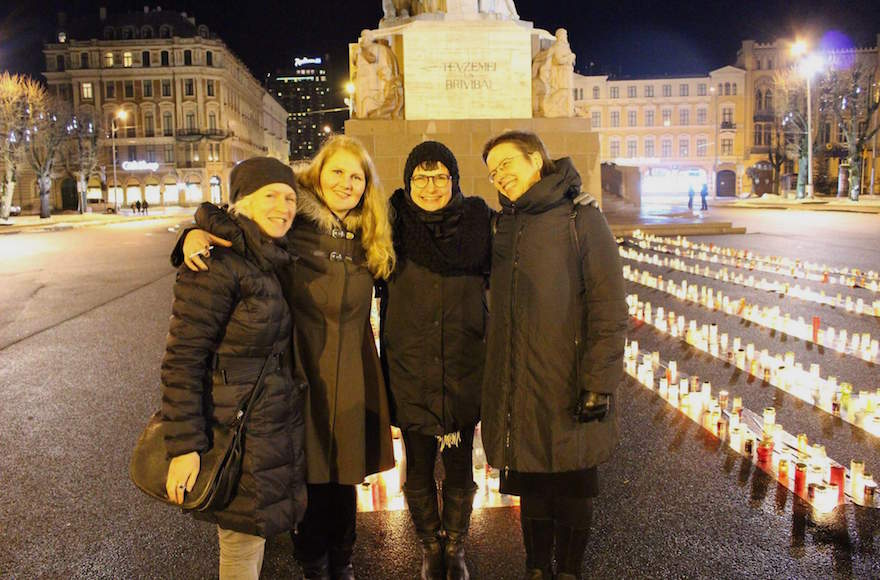 Lolita Tomsone, second from left, with participants of the Holocaust commemoration ceremony that she organized at the Freedom Monument, Nov. 30, 2017. (Courtesy of Tomsone)

In Lithuania, hundreds of nationalists march each year with swastikas and banners carrying portraits of collaborators who helped murder Jews. There, Zuroff’s 2016 book about the Holocaust led to the first debate of its kind about local complicity in the genocide. Zuroff, the Eastern Europe director for the Simon Wiesenthal Center, co-authored “Our People” with the popular author Ruta Vanagaite.

In recent weeks, though, a Lithuanian Cabinet minister submitted legislation that would outlaw the sale of material that “distorts historical facts” about his country – an echo of a similar and controversial bill recently passed in Poland. Vanagaite has left Lithuania amid a smear campaign against her: After she dared criticize a Lithuanian nationalist hero, her publishing house recalled and shredded all of her books.

“In the Baltics, the local population was heavily complicit in the near annihilation of the Jewish community, so there’s particularly strong resistance to facing that reality,” Zuroff said. “But the actions of ultranationalists are generating resistance. It’s a pendulum effect and it’s not clear how it all turn out, but for sure there’s resistance and scrutiny that weren’t there just a few years ago.”

Ilya Lensky, director of the Jews in Latvia Museum here, said he regarded the candle-lighting memorial for Holocaust victims as “significant.” But he also said that the march by the SS veterans was “greatly inflated in Russian media” and that Jews in Latvia generally do not encounter discrimination or intimidation by the Latvian far right.

“Holocaust denial is pretty much nonexistent,” Lensky said. “Latvia has always had center-right governments, and we haven’t seen the radicalization that has occurred in other parts of Europe.”

To some participants in the candle-lighting vigil, attending also was an act of protest against the veneration of SS veterans on the site.

“This memorial event near the monument I think not only counterbalances the SS march, but helps strengthen humanist foundations of society,” Gersons Breslavs, a Latvian Jewish psychologist who attended last year’s Holocaust vigil, told JTA.

Some in Riga seek more confrontational manners of expressing their disapproval of the march.

Joseph Koren, founder of Latvia Without Fascism, regularly pickets the march along with some 20 protesters who demonstrate even though police won’t give them permission for a counter rally.

Several protesters are arrested each year, despite the fact that Latvian law allows individuals to protest anything without a permit as long as they don’t incite to violence or advertise the demonstration in the media.

Like Koren, Tomsone says she dislikes the SS march at Freedom Monument. But unlike him, she accepts the moral right of Latvians to commemorate soldiers who died fighting for Adolf Hitler’s army, she said. The most appropriate place to do so is at the Lestene Cemetery, where many Legionnaires are buried, rather than at the Freedom Monument, she stipulated.

Her approach, she said, is informed by her own family’s story.

Local authorities under German occupation locked up her great-uncle and grandfather for three days until one of them, the great-uncle, Eduards Liepajnieks, agreed to “volunteer” — part of the strategy of coercion that local authorities under Nazi occupation in Latvia used to force into conscription young men who did not volunteer to serve in the SS. Eduards was killed fighting the Russians as a member of the German army. Tomsone’s grandfather, Fricis, withstood the pressure and was released shortly after his brother acquiesced, she said.

“To this day, my grandfather is angry at his brother’s weakness,” Tomsone said. “He talks about it all the time, how his brother would still be alive if he had more of a spine.”

The story, she said, shows the nuances about collaboration in Latvia.

“No, they did not all join under the threat of execution, as some argue,” she said. “But they didn’t all join because they were bloodthirsty fascists, either. As usual, the truth is somewhere in the middle.”