Does Natalie Portman’s snub of Netanyahu make her the face of liberal Zionism? 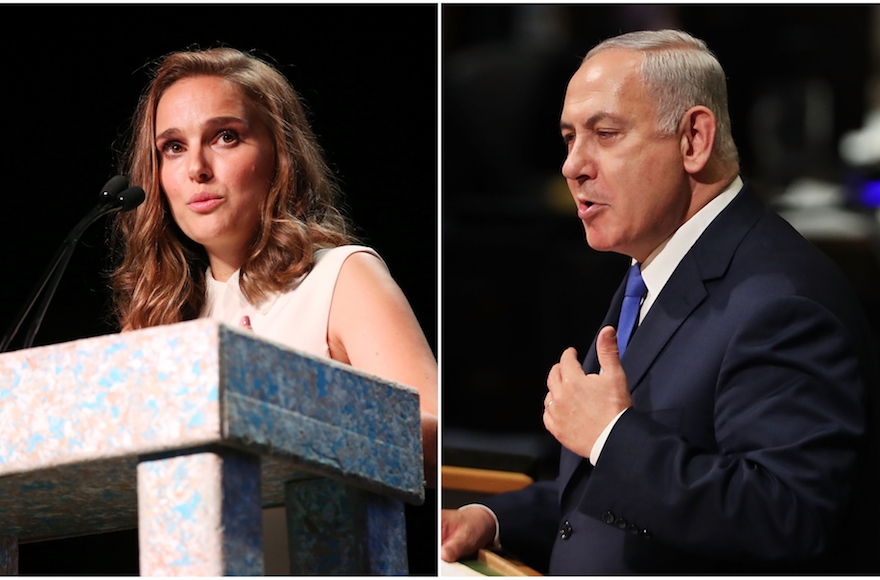 WASHINGTON (JTA) — Natalie Portman’s statement explaining why she declined to attend an award ceremony in Israel in her honor was a pointed rebuke, and of a particular individual.

“I did not want to appear as endorsing Benjamin Netanyahu,” she said of the Israeli prime minister.

But it also was an intimate and tactile embrace of her native land, covering its flavors, its images, its vision, even its movement.

“I treasure my Israeli friends and family, Israeli food, books, art, cinema, and dance,” the Jerusalem-born director and actor said late Friday in an Instagram post explaining why she would not take part in the festivities surrounding the 2018 Genesis Prize.

The argument that one may love Israel and despise its leaders is as old as the state and has traversed the political spectrum: In Israel’s first years, the famed screenwriter and Zionist Ben Hecht accused the Labor Party leadership there of betraying the country’s rightists.

Yet something about Portman’s decision not to travel to accept the Genesis Prize — given to celebrities who exemplify “the core traits of the Jewish character and values of the Jewish people — has resonated like no similar statement in decades.

JTA’s initial story about her non-appearance is among the most-read in the news service’s online history, and the intensity of the response from Israelis was white hot, with government ministers accusing Portman of borderline anti-Semitism.

“Like many Israelis and Jews around the world, I can be critical of the leadership in Israel without wanting to boycott the entire nation,” Portman said.

J Street, the liberal Jewish Middle East policy group, had sustained support for a decade on essentially that principle, and it is one also embraced by Sen. Bernie Sanders, I-Vt., a 2016 Democratic presidential candidate. In fact, Sanders anticipated Portman’s case just days before at the J Street annual conference.

“As someone who believes absolutely and unequivocally in Israel’s right to exist and to exist in peace and security,” the Jewish lawmaker said, “we must say loudly and clearly that to oppose the reactionary policies of Prime Minister Netanyahu does not make us anti-Israel!”

The J Street crowd ate it up, but the comment went largely unremarked upon outside of the conference. Why did Portman’s comment draw such heat?

“We are living in a celebrity media environment, we just elected a reality TV star president,” Jeremy Ben Ami, J Street’s president, said in an interview. “It means a lot more for the debate when Natalie Portman says it.”

“This is the most prominent figure in American entertainment who has delivered this message,” he said.

Not only has Portman won an Academy Award (in 2011 for “Black Swan”), but her Jewish bona fides are unassailable: She was born in Israel. She made the Hebrew-language movie “A Tale of Love and Darkness.” And as a Harvard student, she served as a research assistant to attorney Alan Dershowitz for his 2003 book “The Case for Israel.”

Mik Moore, a strategic consultant to liberal groups, including a number of Jewish groups, said Portman’s fame was critical to advancing the topic because it attached a name and face to liberal Zionists. As a group, Moore said, liberal Zionists have felt squeezed by the pro-Israel right on one side, and on the other by the non- and anti-Zionist left, including advocates of the Boycott, Divestment and Sanctions movement targeting Israel, or BDS.

“But this is a space that lacks the clarity of purpose that exists to its left among BDSers, and to its right among love-it-or-leave-it supporters of Bibi and company,” he said in an interview on Facebook. Such clarity, Moore said said, “allows people to very quickly identify a point of view that they can claim as their own. And it gives the media a way to categorize this demographic like ‘Reagan Republicans’ did for many years.”

Jill Jacobs, the director of T’ruah, a rabbinical human rights groups, said Portman provided relief from the squeeze that liberal Zionists feel from both sides.

“It’s the people on the right and far left who are collaborating to erase this space and to insist on a false dichotomy between pro-Israel and anti-occupation/pro-democracy,” she said on Facebook.

Libby Lenkinski, the vice president for public engagement for the New Israel Fund, said her group, which funds liberal Israeli advocacy groups, hoped Portman’s statement would bring attention to its agenda, noting that Portman in her statement said she was exploring Israeli charities to support.

“The right celebrity can open up more space on an issue and give more permission to more people to reflect their position,” Lenkinski said. “It can be a catalyst.”

A number of liberal Zionists who praised Portman were aggravated by the patronizing responses the actor received from the right and the left, particularly the insistence on both sides that she was indeed embracing BDS, despite her denials.

“While the far left and right are bent on mischaracterizing Portman’s stance as BDS, we take her at her word,” Debra Shushan, the director of policy for Americans for Peace Now, said in an email. “Natalie Portman is more dangerous [to Netanyahu] than the BDS movement because she can’t be dismissed as an anti-Zionist Israel hater.”

So, like Reagan Republicans, is “Portman Zionism” going to become a thing?

Not so fast, said Lev Gringauz, a student at the University of Minnesota and a reporting fellow for New Voices, a Jewish campus magazine.

The viciousness of the response from Netanyahu’s defenders, which included calls for Portman to have her citizenship revoked, might discourage like-minded people, he said in a Twitter interview.

“When you get attacked quickly on all sides for so much as trying to be nuanced, even if imperfectly so, that means the space for conversation is too narrow for any of us to operate in anymore,” Gringauz said.

For the pro-Israel right, Portman was the latest in a long line of liberal posturers, especially when she decried “the mistreatment of those suffering from today’s atrocities.” Many interpreted those words as referring to Israeli troops who have killed more than 30 Palestinians protesting along the Gaza border in recent weeks. (An Israeli television station reported Monday night that Portman originally told the Genesis Prize that she was canceling her participation in the award ceremony over Gaza.)

“She didn’t express love for Israel,” Ari Teman, an entrepreneur and stand-up comic, said on Facebook. “At most, she expressed love for hummus and dancing. She stabbed Israel in the back for defending itself from Hamas, a terror organization sworn to kill Jews everywhere, and she knew exactly what message she was sending and how it would be used by Israel-haters.”

Josh Block, CEO of the Israel Project, said in an interview that there was a lesson for both Portman and her critics: Portman should be heeded as an intimate of Israel, but should also be cautious in how she expressed her criticism.

“People ought not be working overtime to turn an ally into an adversary, and those with special platforms and such deep ties to Israel need to take care that when expressing their legitimate disagreements, they don’t take actions that as Daniel Patrick Moynihan would say, could be seen as ‘joining the jackals,” he said, recalling the late New York senator. “The better approach for her would be to go to Israel and give a speech and highlight the values important to her in the presence of people she wants to persuade.

“The better response is not to disengage and cede the discussion to others, but to engage more deeply, on the ground, in Israel, with the only — and necessarily imperfect — nation state of the Jewish people.”