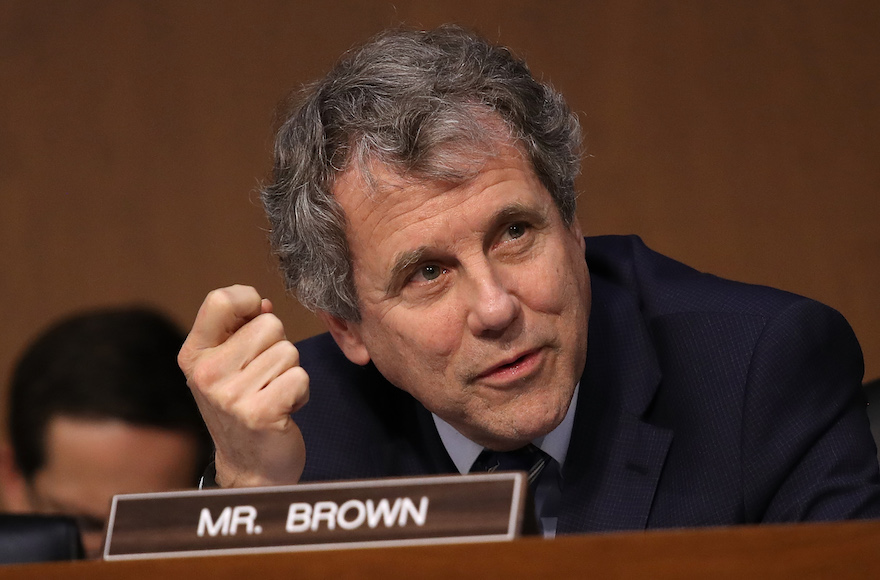 WASHINGTON, DC - NOVEMBER 14: Sen. Sherrod Brown (D-OH) speaks during a markup of the Republican tax reform proposal November 14, 2017 in Washington, DC. Today, Senate Republicans announced their intention to include a repeal of the mandate for taxpayers to have health insurance in the Affordable Care Act as part of their tax reform proposal. (Photo by Win McNamee/Getty Images)
Advertisement

(JTA) — A U.S. senator will bring a French Holocaust survivor to hear President Emmanuel Macron of France speak to a joint session of Congress.

Sen. Sherrod Brown, D-Ohio, invited Fran Greenberg of Bexley, a suburb of Columbus, to Wednesday’s address. Greenberg is a native of Paris who moved to the United States in 1948 at the age of 11. She has lived in Ohio for 50 years.

“I am very pleased to see that President Macron of France has taken the resurgence of French anti-Semitism very seriously,” Greenberg said in a statement issued by Brown’s office. “The frightening move toward a nationalism of blood and soil all over the world cannot not be allowed to turn us back 70 years to those dark days. I am eager to hear him share his thoughts and hope our own administration can respond similarly to the alarming expressions of racism and bigotry in this country.”

Macron is on a state visit to the United States. He met Tuesday at the White House with President Donald Trump.

“I’m honored Ms. Greenberg will be in the audience to represent Ohio well as President Macron delivers his address,” Brown said in the statement. “She is a tribute to the triumph of the human spirit and a reminder of why we must remain vigilant against hatred across the globe.”

Brown will meet with Greenberg prior to the address.

Last month, a French Holocaust survivor was murdered in her Paris apartment in what has been identified by investigators as an anti-Semitic attack.