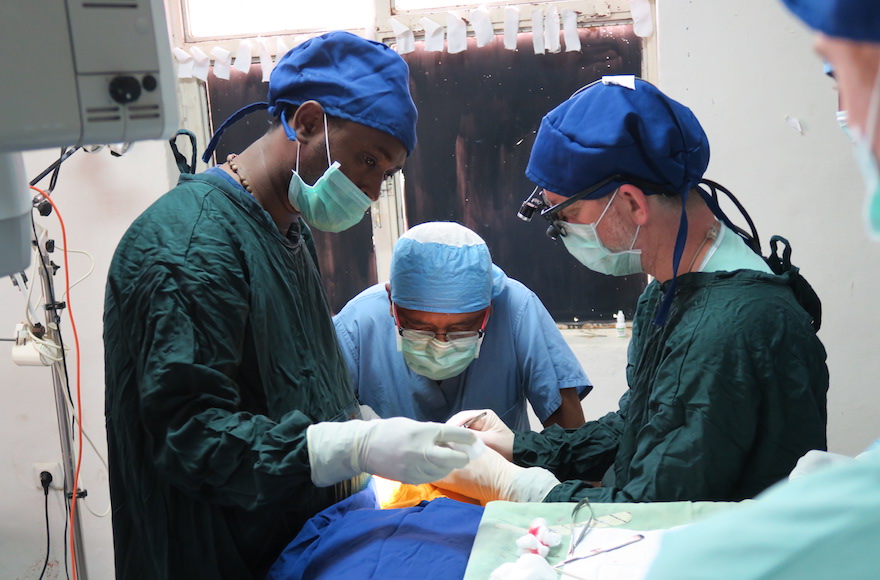 Dr. Morris Hartstein, center, frequently travels to Gondar, Ethiopia, to run clinics where he sees up to 500 patients at a time and performs some surgeries. (Courtesy of Hartstein)
Advertisement

RAANANA, Israel — In August 2014, Dr. Morris Hartstein went on a trip to Gondar, Ethiopia, where thousands of Ethiopians seeking to immigrate to Israel live and wait while Israel considers their eligibility to make aliyah.

On his second day there, Hartstein showed up for the afternoon mincha service and saw more than 100 people waiting patiently. He thought they were there to pray.

It turns out they were there to see him.

“They heard there was an eye doctor present and they came hoping to get help,” Hartstein said.

Hartstein had come from his home in this Tel Aviv suburb to volunteer at the Jewish aid compound in Gondar, bringing along his wife, Elisa, and their four children. But Hartstein, an ophthalmic, plastic and reconstructive surgeon, was not there in an official medical capacity and had only a penlight with which to check their eyes.

With the help of an Israeli university student volunteer acting as translator, Hartstein managed to examine all of the Ethiopians, who claim Jewish ancestry and are known as Falash Mura. He found that half of the Ethiopians had ocular health problems, often stemming from constant unprotected exposure to harsh sunlight and unsanitary living conditions. The Ethiopians had dense cataracts, severe conjunctivitis, trachoma and corneal scarring. Hartstein also saw children with crossed and lazy eyes in need of correction.

“At that point, all I could do was send them to the local hospital,” said Hartstein, who works in Israel as director of oculoplastic surgery at Yitzhak Shamir Medical Center (formerly known as Assaf Harofeh Medical Center). “But it turned out that none of them followed through. They either couldn’t afford the 50-cent fee or didn’t know how to navigate the medical system.”

Hartstein refused to leave things as they were. He and his family began making more frequent trips to Ethiopia, running periodic clinics during which he sees up to 500 patients at a time. He brings with him hundreds of pairs of donated eyeglasses and large quantities of eye drops and medications.

Flying back and forth to do volunteer work in Africa was the kind of thing Hartstein, 54, never could have foreseen being a part of his life in Israel, where he and his family moved more than a decade ago from St. Louis. 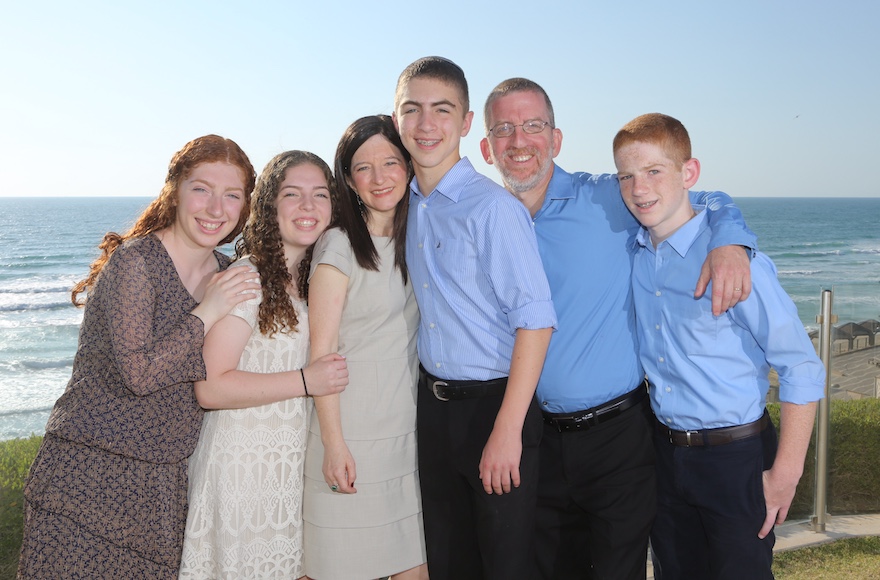 Dr. Morris Hartstein and his family formally immigrated to Israel in 2009, coming from St. Louis. The Hartsteins’ oldest daughter now serves in the Israeli army. (Courtesy of Hartstein)

The family initially spent a sabbatical year in Raanana, during which Hartstein, a tenured professor at St. Louis University, established ties with Assaf Harofeh hospital. The sabbatical extended to two years, and then the family decided to stay permanently in Israel.

They formally made aliyah in 2009, getting help from Nefesh B’Nefesh, the agency that facilitates and encourages immigration to Israel from North America. For Americans already in Israel, the agency has a “guided aliyah” program that assists with bureaucratic hurdles and the acquisition of formal citizenship.

“It was a very smooth process,” Hartstein recalled. “We filled out a form for each family member and sent them in. Less than a week later Nefesh B’Nefesh called us to say that our ‘teudot zehut’ [Israeli identity cards] were ready.”

Hartstein has always been a Zionist. He grew up Modern Orthodox in St. Louis, and both he and his wife had spent time in Israel. But the family had never seriously thought about immigrating until the sabbatical. Living in the Jewish state with their children, they soon made up their minds that they wanted to stay.

Although Hartstein knows many American doctors who commute back to the U.S. for work, he decided that option wasn’t right for his family. Instead he stayed in Israel, doing reconstructive and medically indicated surgery at the hospital while also maintaining a private practice in Herzliya, where his work includes elective plastic surgery.

“You can make a good living as a physician in Israel, especially if you have a surgical or procedural specialty you can do in private practice,” Hartstein said. “I like being invested in Israel and the medical community here. I like to stay in regular touch with my patients. I couldn’t do that if I were commuting.”

Having learned Hebrew from a young age, Hartstein had no problem with the language, and he quickly mastered Hebrew medical terminology.

But there were other challenges. Hartstein was accustomed to a certain way of doing things from his medical training at Harvard University and Bellevue Hospital at New York University, and from his work at St. Louis University Hospital. In Israel, the medical culture was different.

“There is just a single secretary for my department, no one has a designated private office, and people just walk in on you when you are in the middle of something — even while examining a patient,” Hartstein said with a laugh.

One pleasant surprise, he said, is that politics stops at the hospital door. Hartstein treats many Palestinian patients, including cases from Gaza. He and others work hard to secure funding and permits to get such patients into Israel for proper care. 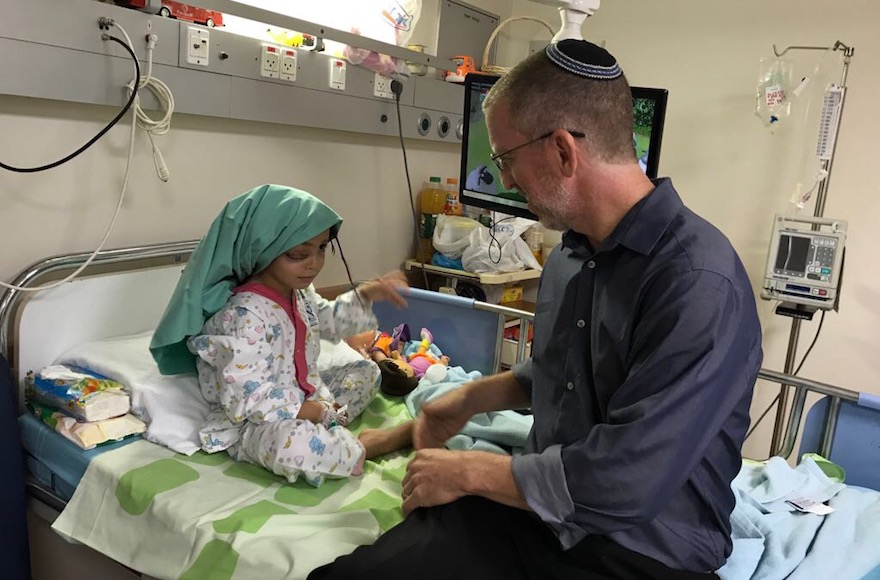 Dr. Morris Hartstein treating a Palestinian girl from Gaza with a lymphatic malformation in one of her eyes. She received treatment in an Israeli hospital. (Courtesy of Hartstein)

After one 5-year-old Palestinian girl with a rare lymphatic malformation engulfing her right eye came with her grandmother to Hartstein for treatment, the girl’s father — who was not permitted to accompany her into Israel — did not hesitate to post a photo on social media of the yarmulke-wearing Hartstein with a sincere message of praise and thanks.

In the summer of 2014, as the war in Gaza raged, Hartstein treated another young Gazan girl who had suffered severe burns from a house fire. The doctor and his staff restored her eyelids using skin grafts.

“She and her family were in the hospital all summer. They couldn’t return home,” Hartstein said. “They were treated very well.”

Hartstein said he is in regular contact with his Gaza patients and a Palestinian ophthalmologist there with whom he coordinates patient care.

Meanwhile, the couple’s eldest child, Eliana, 18, recently completed high school and now serves in the Israeli army. She and her siblings — Dalia, Zack and Jonah, now all teenagers – have gone back to Ethiopia several times to help out with their father’s clinics.

Hartstein has deepened his connections to Ethiopia. He established a program in 2017 to bring Ethiopian medical residents to Israel for a month of training at his own hospital. On his trips to Ethiopia, Hartstein lectures and performs surgery at the Gondar hospital.

“It turned out I needed an Ethiopian medical license, so I got that with the help of the Himalayan Cataract Project,” Hartstein said, referring to an organization that works to eradicate preventable and curable blindness in the developing world.

He recently started a cataract surgery program in Gondar, where the chair of the eye department performs cataract surgery for $50 to $80 per patient. The funding comes from a group called the Struggle to Save Ethiopian Jewry. There have been 15 surgeries and the outcomes have been good, according to Hartstein.

Overall, Hartstein said, the move to Israel was one of the smartest decisions he ever made.

“We love living in Israel, and I enjoy practicing in a public Israeli hospital,” Hartstein said. “I wouldn’t have had such a wide range of patients in the U.S. as I have here, from Palestinians to famous rabbis to everyone in between. I am part of a vibrant and dynamic medical Israeli community, and I feel that I am really making an impact.”