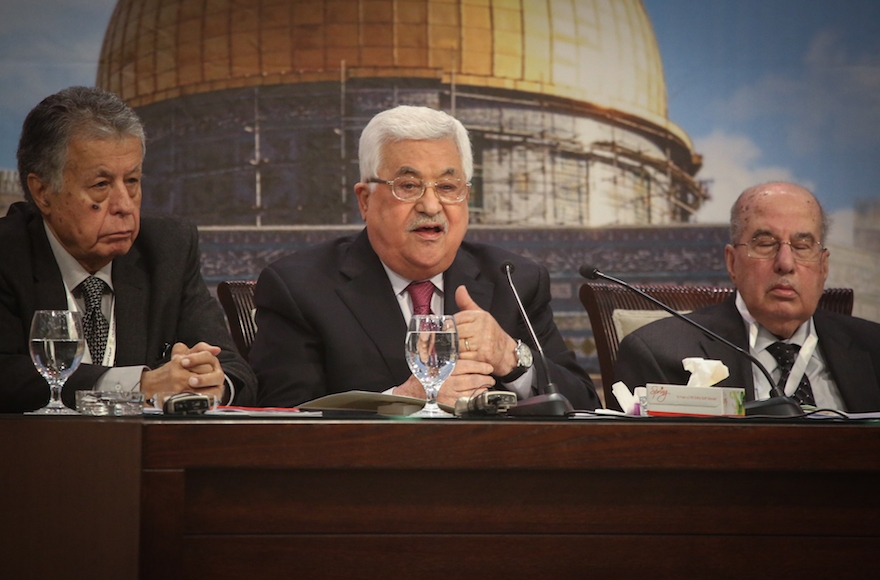 NEW YORK (JTA) — Rabbi Donniel Hartman had some bad news for his audience on the largely liberal Upper West Side: The two-state solution might not be dead, but it’s not imminent either, and most Israelis don’t believe the two-state solution is “implementable in their lifetime.”

It’s not a matter of ideology or triumphalism or religious messianism on their part, Hartman, president of the Shalom Hartman Institute, told his audience at the Marlene Meyerson JCC Manhattan‎ on Tuesday night. It’s that 20 years of false turns and Palestinian terrorism and the false promises of the Arab Spring have undermined the Israelis’ capacity for imagination.

“What is the second state?” he asked, channeling his fellow Israelis. “How many functional Arab states are there?” Israelis look around the Middle East and see Syria, Lebanon and Iraq, and demand, “show me this country that can be functional.”

Israelis aren’t wedded to occupation, Hartman said, and few want their kids to do what soldiers have to do to maintain it. But they prefer the status quo to whatever unknown thing might replace it. And Prime Minister Benjamin Netanyahu’s “greatest source of strength” is his ability to maintain the status quo.

The Hartman Institute, founded by Donniel’s father, David, and named for his grandfather, is often described as a liberal Zionist think tank. Certainly its insistence on religious and ideological pluralism makes it suspect on the right. And the left might find itself impatient with the assertion by various Hartman scholars that Israel’s security establishment is functioning about as well and as ethically as it can given the circumstances under which it lives.

How those circumstances created the current political climate was a large, and convincing, part of Hartman’s talk. And it came the day after Mahmoud Abbas, the head of the Palestinian Authority, seemed to ensure that the climate won’t change anytime soon.

Speaking to the the National Palestinian Council in Ramallah on Monday, Abbas offered what he called a “history lesson” on Jews and the Holocaust that echoed some of the worst of European-style denialism.

In other words, the six million had it coming to them. And, by the way, Zionism was “a colonial enterprise that has nothing to do with Jewishness,” Abbas said, and Hitler and the Zionists were once in cahoots.

The reaction — condemnations cross the political spectrum — suggested that this isn’t a question of dueling narratives. By suggesting the Final Solution wasn’t the result of blind and indiscriminate hatred for Jews and all things Jewish, Abbas attacked a core of Jewish self-identity and the scholarly consensus. Netanyahu called it “another anti-Semitic speech” and Jason Greenblatt, President Donald Trump’s chief Middle East peace negotiator, urged that Abbas’ remarks “be unconditionally condemned by all.”

The dovish Israel Policy Forum, like J Street and Americans for Peace Now, emphasized that this wasn’t just about one leader’s bad grasp of history.

“It is impossible to view Abbas as a viable negotiating partner when he continues to deny the right of the Jewish people to their own national movement and when he continues to insist that the basic recognition of a Jewish homeland is the original sin of the Israeli-Palestinian conflict,” its statement read.

The Israel Policy Forum statement, like Hartman’s remarks, help explain why words like Abbas’ drive yet another nail into the coffin of the two-state solution. Israelis yearn for normalization more than occupation, Hartman said. The Oslo process and subsequent efforts by various Israeli prime ministers suggested what Israel was willing to give up to create a Palestinian state. Whether you agree with that version of history or not, Hartman said, “the dominant perception is we offered and they said ‘no.'”

But Israelis also define normalization as an acceptance of at least the basic outlines of their historical narrative, beginning with historical Jewish connection to the land of Israel, the truth about the Holocaust and the right of Jews to claim a national identity. Most are willing to discuss borders and security arrangements, but not until the Palestinians and their supporters accept Israel’s existence.

Of course, you can argue, as Evan Gottesman of the Israel Policy Forum did this week, that the Palestinians’ hatred of the Jews explains why the two peoples need to be separated in the first place. But Israel is a democracy, and separation will come as the result of a political process. And right now, few in the Israeli public have the stomach to enter into talks and take risks with a partner who thinks the Jews brought the Holocaust on themselves.

For all the bad news he shared on Tuesday, Hartman offered some hope that given the right partner and a new discourse in Israel, a viable new vision for two states might emerge. But don’t hang by your thumbs. Israelis look at Gaza and don’t see innocents being mowed down along the border, but a society that has invested billions in global aid in constructing tunnels to infiltrate Israel — not to smuggle goods, but in the hopes of kidnapping or killing an Israeli soldier or civilian. Israelis don’t want the West Bank to turn into Gaza.

Diaspora Zionism, Hartman said, has the luxury of dwelling in the realm of the imagination. Diaspora Jews can picture the ideal Israel, and even annoy Israelis with their insistence of what that can be.

Hartman doesn’t want the Diaspora to stop imagining — peace , he said, will be the result of a lot of “long-term work” — but he does want Jews outside of Israel to recognize what happens when imagination meets the reality of Arab and Iranian rejection.

“In our neighborhood,” he said, “imagination gets you dead.”