After pulling out of the Iran deal, Trump is open to Plan B — but no one knows what that is 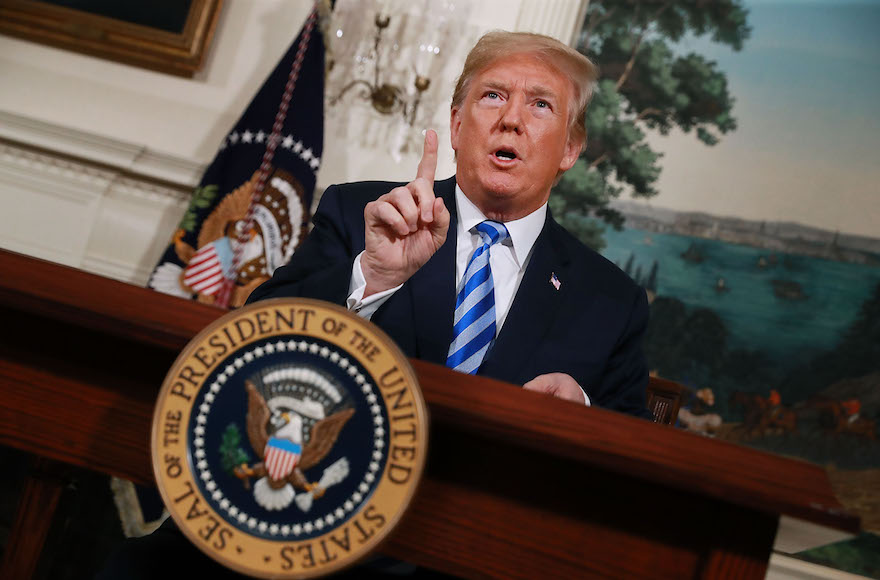 President Donald Trump announcing his decision to leave the Iran nuclear deal in the Diplomatic Reception Room at the White House, May 8, 2018. (Chip Somodevilla/Getty Images)
Advertisement

WASHINGTON (JTA) — When President Donald Trump teased and then announced he would be pulling the U.S. out of the Iran nuclear deal, the next obvious question was, what next? What was Plan B?

“Congress has heard nothing about an alternative,” Rep. Ed Royce, R-Calif., the chairman of the U.S. House of Representatives Foreign Affairs Committee said at a hearing on Iran on Tuesday. That was just hours before Trump announced that he was indeed pulling the United States out of the 2015 Iran nuclear deal. Royce noted that he and others on the committee had opposed the deal in 2015 and had been eager to work with Trump to fix it.

Trump’s announcement was short on answers.

“Over the past few months, we have engaged extensively with our allies and partners around the world, including France, Germany, and the United Kingdom,” Trump said. “We have also consulted with our friends from across the Middle East. We are unified in our understanding of the threat and in our conviction that Iran must never acquire a nuclear weapon.”

And yet, France, Germany and Britain remain committed to the deal. “Our friends in the Middle East,” particularly Israel and Saudi Arabia, wanted out. “Unified in our understanding”? Not so much.

The split was evident in the minutes following Trump’s announcement, when leaders had responses at the ready. France, Britain and Germany jointly pleaded with Trump to do his best not to harm the deal, called the Joint Comprehensive Plan of Action, even while leaving it.

“We urge the U.S. to ensure that the structures of the JCPOA can remain intact,” they said in a statement, “and to avoid taking actions that can obstruct its full implementation by all other parties to the deal.”

Khalid bin Salman, the Saudi ambassador to the United States, said on Twitter that his country “fully supported” the pullout.

The American Israel Public Affairs Committee, like an array of other Jewish organizations, released a statement following Trump’s announcement recognizing the tensions and seeking a path toward reconciling them.

“We recognize that there are significant differences over this decision,” said the statement from the group, which opposed and lobbied hard against the 2015 deal. “AIPAC remains committed to working with Congress and the administration in a bipartisan fashion to forge policies that will ensure Iran can never acquire a nuclear weapons capability or realize its dangerous regional ambitions.” 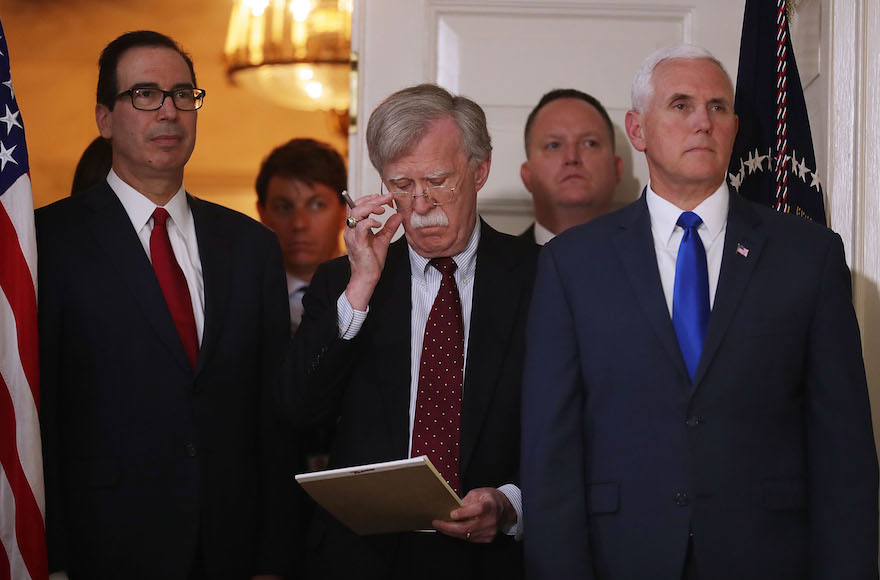 How that works is less than clear. The deal swaps sanctions relief for Iran’s rollback of its nuclear program. Trump had said he might stay in the deal if it could be renegotiated to remove “sunset” clauses that allow Iran to resume some enrichment of fissile material within a decade. He also wants a tougher inspections regime and to roll a missile testing ban into the deal.

European allies said reopening the deal now, particularly in relation to the sunset clauses, was impossible, especially given the adamant opposition of the other parties: Iran, Russia and China. Instead, they countenanced increasing pressure on Iran in other arenas, including new sanctions targeting its missile testing, and then committing to pressure on Iran as the sunset clauses loomed closer to extend bans on enrichment.

In his presidential order quashing the deal, Trump said he was ready to keep talking.

“I am open to consultations with allies and partners on future international agreements to counter the full range of Iran’s threats, including the nuclear weapon and intercontinental ballistic missile threats, and the heads of agencies shall advise me, as appropriate, regarding opportunities for such consultations,” the order said.

There may be some room to talk. Iranian President Hassan Rouhani and other leaders said following Trump’s announcement that they were ready to take up Europe’s offer to figure out a way to stay in the deal.

“If the Europeans are willing to give us sufficient guarantees, it makes sense for us to stay in the deal,” Ali Motahar, the deputy speaker of Iran’s parliament, said in remarks quoted by the Washington Post.

Additionally, the Trump administration would have to put in place staff and mechanisms to monitor compliance with U.S. sanctions, a process that could take months, giving some leeway to renegotiate a deal.

But now that the United States is out of the deal, the stars may be aligning to keep another deal from replacing it. The sanctions Trump will reinstate target countries, businesses and individuals that deal with Iran’s financial system. Simply announcing the reimposition of sanctions is likely to have an inhibitive effect on doing business with Iran, effectively crippling the deal almost immediately. And Trump made clear in his announcement he was not going to be sparing in his sanctions.

“We will be instituting the highest level of economic sanction,” he said. “Any nation that helps Iran in its quest for nuclear weapons could also be strongly sanctioned by the United States.”

Speaking to reporters afterward, John Bolton, Trump’s national security adviser, said there would be 90-180-day “wind down” periods for companies that have existing contracts in Iran.

If those sanctions kick in for European companies, it could poison the atmosphere between the United States and those allies, making coordination on a reconfigured deal less likely.

The other circumstance clouding the prospect of a new deal was tensions between Israel and Iran in Syria. Iran has for years assisted the Assad regime in quelling the civil war in that country, and Israel has said in recent months that it cannot tolerate a permanent Iranian presence in the country.

On Tuesday, shortly after Trump’s announcement, Israel’s military increased its readiness on the northern border in the Golan Heights in response to what it is calling “unusual movements of Iranian forces in Syria.”

Trump’s announcement also revived old tensions and heated rhetoric that preceded the JCPOA’s adoption. Morton Klein, the hawkish head of the Zionist Organization of America, tweeted, “I’m thrilled Trump kept yet another promise in ending catastrophic Iran Deal which I believe Obama instituted to strengthen Iran’s ability to harm Israel. We urge Trump to make clear if Iran doesn’t end their nuke program, US & Israel will be forced to consider military action.”

“A regime that serially celebrates the denial of the Nazi Holocaust — history’s most documented genocide — ever took place, can be relied upon to lie about its commitments to the international community,” said Rabbis Marvin Hier, founder and dean and Abraham Cooper, associate dean, of the Simon Wisenthal Center, in a statement. “Lying is the national anthem and magna carta of the Ayatollah’s regime.”

And former President Barack Obama, who considered the JCPOA a hallmark of his presidency, offered a rare response to a move by Trump, saying his successor had scrapped a deal that was working.

“Without the JCPOA, the United States could eventually be left with a losing choice between a nuclear-armed Iran or another war in the Middle East,” Obama wrote on Facebook. “We all know the dangers of Iran obtaining a nuclear weapon. It could embolden an already dangerous regime; threaten our friends with destruction; pose unacceptable dangers to America’s own security; and trigger an arms race in the world’s most dangerous region. If the constraints on Iran’s nuclear program under the JCPOA are lost, we could be hastening the day when we are faced with the choice between living with that threat, or going to war to prevent it.”