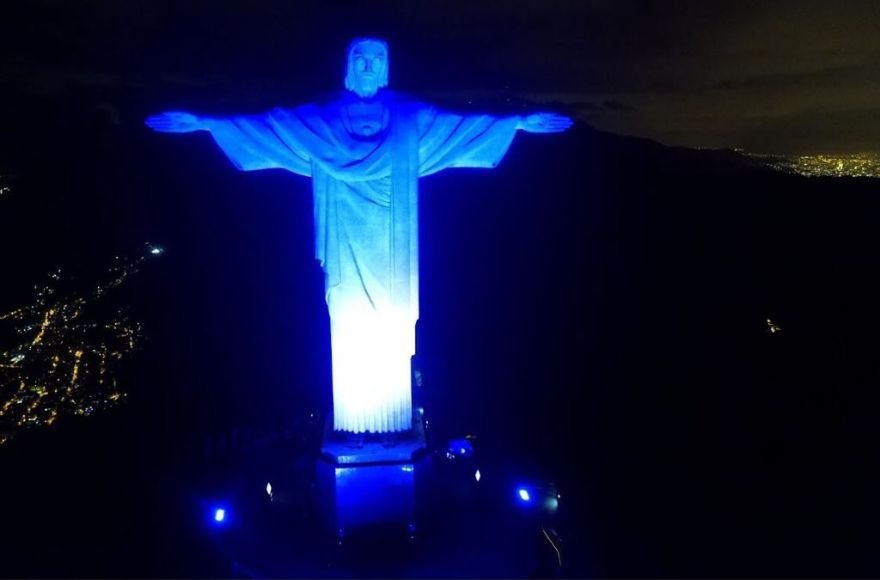 (JTA) — National landmarks in Brazil and Poland were illuminated in blue and white to celebrate Israel’s 70th anniversary.

The Christ Redeemer statue in Rio de Janeiro, which is managed by the Catholic Church, glowed in white and blue on Monday.

Commenting on the Rio tribute, Israel’s honorary consul there, Osias Wurman, told JTA: “It is a historic event in the Jewish-Christian relationship in Brazil. For the first time in 70 years, the most important symbol of the Christian faith in Brazil was illuminated with Israel’s blue and white.”

The illumination event of the 100-foot tall landmark in Rio, located on a 700-foot high mountain peak, was also attended by Israeli Ambassador Yossi Shelley and the president of the Rio Jewish federation, Herry Rosenberg. A symbol of Christianity across the world since its dedication in 1931, the statue is listed as one of the New Seven Wonders of the World.

“Brazil is home to some 130,000 Jews and Israel is home to some 150,000 Christians. This homage today conveys a message of peace and respect. There is always room for all religions,” said Shelley, who days ago was awarded an honorary citizen medal by the Rio municipal chamber.

On April 22, some 2,000 Jews celebrated Yom Haatzmaut at a Jewish club in Rio, including Rio’s Mayor Marcelo Crivella, who donated an area to build the city’s first Holocaust Memorial. The mayor laid the cornerstone for the site in 2017. Earlier last month, the words “Holocaust Never Again” in Portuguese were projected on Brazil’s National Congress buildings in Brasilia, an unprecedented honor to mark International Holocaust Remembrance Day in the country’s capital city.

In Poland, the Warsaw Bridge and that city’s iconic Palace of Culture and Science were similarly lit Monday, prompting the Israeli embassy there to thank the city.

Israel’s 70th Independence Day was celebrated Monday in countries all over the world — including the Balkan nation of Kosovo, which some consider Europe’s youngest country. Dozens of local Jews gathered at the National Library of the capital city Pristina to celebrate Israel’s birthday on Monday.

Kosovo is celebrating a decade since its declaration of independence from Serbia, though many nations — including Israel — do not recognize it as independent.