These Jewish groups are fighting — even physically, according to some — behind the scenes 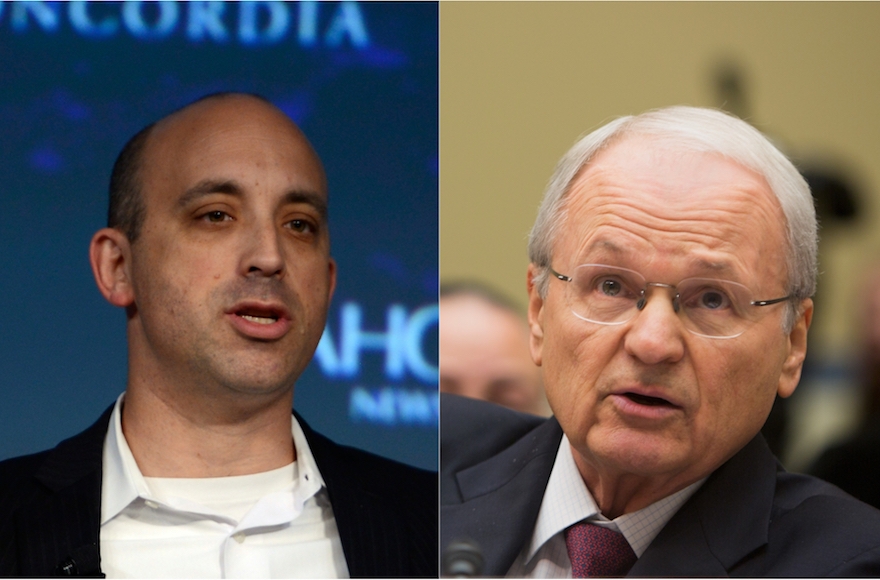 Jonathan Greenblatt, left, is the CEO of the Anti-Defamation League. Morton Klein, right, is the head of the Zionist Organization of America. (Getty Images)
Advertisement

On May 2, the committee met, in strictest confidence, to hear three complaints. The session, all parties agree, soon devolved into insults, ad hominem attacks and name-calling — and without a decision or definitive plans for what happens next.

Three Jewish organizations — the National Council of Jewish Women, the Anti-Defamation League and HIAS — accused the Zionist Organization of America of inappropriately criticizing them; in turn, the ZOA filed complaints against member groups that have yet to be scheduled for hearings. (The ZOA says it was not told that the meeting was off the record.)

The complaints range from differences as picayune as who is responsible for anti-Zionist signs at a mass rally to intimations of corrupt intent to allegations of violence.

Jewish politics is often nasty, but rarely is the infighting this public. The charges and counter-charges also demonstrate the ways that ZOA president Morton Klein consistently gets under colleagues’ skin.

HIAS, NCJW and ADL declined to comment, citing confidentiality. However, JTA obtained ADL’s complaints and spoke to someone who was familiar with the proceedings and who was sympathetic with the three complainants.

ZOA’s director of special projects, Liz Berney, said the May 2 meeting, where ZOA was facing complainants, was marked by “emotional” responses by HIAS CEO Mark Hetfield and ADL’s general counsel, Steven Sheinberg, while her side was cool and armed with facts. She said she did most of the talking.

NCJW’s complaint cited a ZOA press release last November “condemning” it, HIAS and J Street among other groups for joining a letter in May defending Palestinian-American activist Linda Sarsour against “vicious public threats and intimidation.” The ZOA’s letter referred to NCJW and HIAS as Jewish “extremists.” NCJW and ZOA also traded charges over the degree to which the women’s group helped keep anti-Zionist messages, including placards, out of the Women’s March.

HIAS complained about a ZOA letter to the Forward in January of 2017 charging that HIAS invoked “morality” in defending refugees because it receives “millions of dollars” of government grants to resettle refugees — essentially saying it defended refugees out of economic self-interest.

And ADL’s CEO, Jonathan Greenblatt, submitted to the Presidents Conference a six-page letter and an Excel sheet with 36 complaints against ZOA dating back to 2007. Many of the complaints focused on ZOA claims that the ADL was not fulfilling its mission in defending Jews and Israel. In one instance, which the ADL called “grotesque,” Klein complained to the Jerusalem Post in April 2016 about ADL’s criticism of then-presidential candidate Donald Trump’s attacks on refugees.

“The ADL should be fighting anti-Semites and Israel-haters, not helping to bring them to America to join the anti-Israel lobby,” Klein said. “Does the ADL enjoy seeing horrific Muslim activities in Europe against women and others?”

The source apprised of this month’s meeting who was sympathetic to the views of the complainants, said that that it was the ZOA side that was overwrought. The source said Klein repeatedly interrupted others, and was cautioned multiple times by Richard Stone, a past chairman of the Conference of Presidents, who chaired the meeting. The meeting ended without a conclusion; it’s not known yet whether the committee will reconvene or submit a report or ask for more details.

The Conference of Presidents, representing the leaders of more than 50 Jewish groups, would not comment for this story, saying its leaders were traveling and unavailable for comment.

The most serious complaint, however, came from the ZOA side, and has yet to be heard. Berney has accused Greenblatt of grabbing her after a May 31, 2016, panel discussion at the United Nations on the boycott Israel campaign. Greenblatt, she said, was incensed by ZOA ‘s claims that ADL is not representing Jewish interests.

“I’m standing with a group of people, four to five people, and suddenly Jonathan Greenblatt grabs me,” she told JTA. “He came up to my right side, put his arm around my back, grabbed me with his left hand on my left shoulder. He starts pushing me with the force of his arm down the hall. I was trying to get away from him, and he was restraining me.”

Greenblatt, screaming, led her to the offices of the Iraqi and Syrian missions, Berney said.

“‘This is the real enemy — let’s go by the offices of the real enemy,'” Berney quoted Greenblatt as saying. “All this time, he’s continuing to hold my shoulder really tight, not letting me out of his grip, and basically dragging me down the hall. I was so shaken up by it.”

JTA spoke to six people who said Berney described the event to them, on the day of the U.N. meeting or within two days of it. None actually witnessed it. All but one recalled her describing Greenblatt gripping her while guiding her to the office; one recalled only that Berney described an altercation. Two of those interviewed, Klein and Susan B. Tuchman, are ZOA staffers. The others spoke on condition of anonymity, saying they feared reprisals within the Jewish organizational world.

The ADL said it looked into the claim and found it baseless.

“ZOA has a long history of making outrageous claims against Jewish organizations they disagree with, including for many years, the ADL,” an ADL spokesman said in response. “That is why the Conference of Presidents of Major American Jewish Organizations is currently conducting a disciplinary hearing about ZOA’s behavior. When ZOA leveled these charges privately to the ADL two years ago, we — despite their provenance — took them seriously, looked into the matter, and determined that no inappropriate conduct took place. It is sad that a once venerable organization in the Jewish community would resort to this behavior.”

Berney and Klein said they wrote ADL directly asking for an apology, and Klein said that subsequently at a Conference of Presidents meeting, Greenblatt threatened him physically. JTA could not find someone to corroborate Klein’s account of that encounter. Berney, an attorney, said she decided not to report her U.N. encounter with Greenblatt to police because of the ambiguous status of U.N. territory — it’s not clear, she said, whether New York law held there — and because she believed it was better to discreetly seek a direct apology. Klein said his subsequent confrontation with Greenblatt started when Klein demanded an apology, and Greenblatt’s response is what led the ZOA to refer the matter to the committee.

The ZOA, which stakes out positions on Israel, refugees and Muslims usually well to the right of the three groups lined up against it, has a reputation for heated and sometimes derogatory rhetoric. Last week Klein accused former President Barack Obama of signing the Iran nuclear deal in order to “to strengthen Iran’s ability to harm Israel.” Klein is a frequent contributor to the right-wing Breitbart News, where he recently lambasted the American Israel Public Affairs Committee for its support of the two-state solution. Last month he apologized for sexist comments about the actress Natalie Portman and a female ZOA executive.

His critics in the Conference of Presidents say their complaints are not about politics, but the tone and language in which ZOA expresses them. The Conference’s “Statement on Public Discourse,” first written in 1995 and updated in 2017, bans “insults, ad hominem attacks, and name calling” among its members, and statements that are “false, inaccurate or unfairly exaggerated.”

“If the ‘Statement’ means anything at all,” Greenblatt said in the letter, “if it is truly the difference between anything goes and even a minor level of decorousness, it must mean that the ZOA cannot say that ADL helps anti-Semites join the anti-Israel lobby.”

Another ADL complaint is that ZOA often personalizes its attacks, for instance noting that Greenblatt for a period led partnerships between government and the high-tech sector for the Obama administration. Klein reviles Obama.

Berney said keeping another Jewish group true to its mission was par for the course.

“Every instance was fair and honest,” she said of the ZOA’s comments on the ADL. “We praise ADL when ADL deserves it. Our purpose was to return ADL to its mission of saving the Jewish people.”

The other ZOA complaint pending before the Conference is against Ameinu, a left-wing Zionist group. In a 2017 fundraising email, Ameinu said that among its priorities was “Challenging the Zionist Organization of America and other groups here at home when they discredit Zionism in the eyes of Americans, both Jewish and non-Jewish alike, as a violent, reactionary, anti-democratic movement.”

“Show me where we said anything was ‘violent and reactionary,'” she said. “This is character assassination.”

Ken Bob, Ameinu’s president, told JTA he would prefer to keep the process confidential, but said the email was not out of bounds, especially considering ZOA’s repeated attacks on others.

“The ZOA with their language their attacks on us and other progressive Zionist organizations do a discredit to the broad nature of the Jewish and Zionist world,” he said. “The ZOA has run campaigns against individual people in organizations — we didn’t mention names or leaders. We think we stayed within the guidelines.”