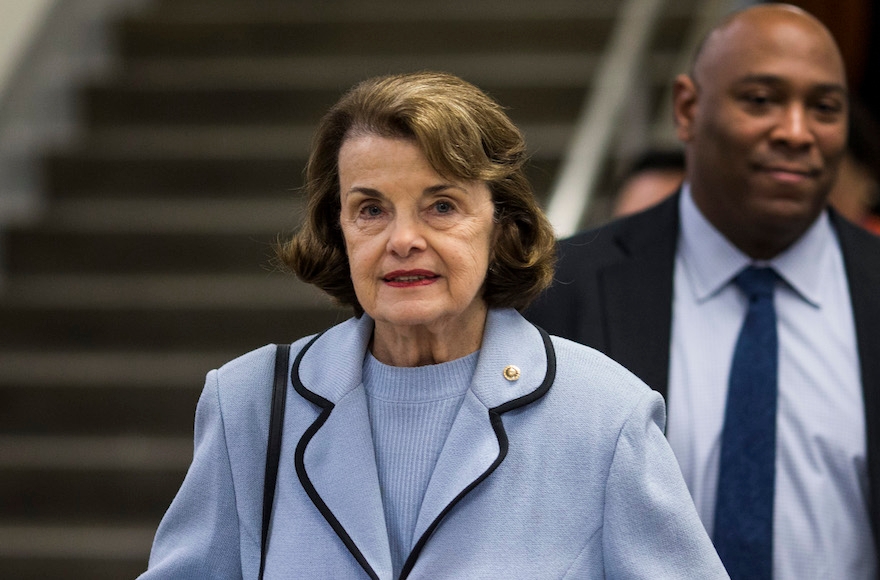 (JTA) — A robocall against California Democratic Sen. Dianne Feinstein used anti-Semitic slurs and urged listeners to support the campaign of her neo-Nazi challenger.

The 90-second call refers to Feinstein as a “traitorous” Jew and “an Israeli citizen pretending to be an American.”

Patrick Little, who is running as a Republican, is polling at 18 percent behind Feinstein, a Democrat who has served more than four terms in the Senate. Feinstein is polling at 39 percent in the race, which will pit the top two vote-getters in the June 5 primary against each other in the general election in November. Mainstream Republicans have not put up a serious challenge in what is considered a safe seat for a Democrat.

“To rid America of the traitorous Jews like Dianne Feinstein, vote for Patrick Little for U.S. Senator for California,” the call said. “He’s a patriot, a veteran of the U.S. Marine Corps, and he’s vowed to end Jewish control over America, starting with Diane Feinstein, an Israeli citizen pretending to be an American while she takes our money for her real country, Israel, and kills our children for it, too.”

The call also says: “He’s going to get rid of all the nation-wrecking Jews from our country,” the ad continues.

Little told the San Francisco Chronicle that he was not aware of the existence of the call. He did not renounce its message, however, telling the newspaper: “Show me the lie, and I will consider renouncing it.

The call said it is sponsored  by “The Road to Power,” which is a little-known podcast that describes itself as “White Nationalist anti-jew,” according to the Right Wing Watch website.