Who killed a Polish Holocaust hero? His family may be close to finding out. 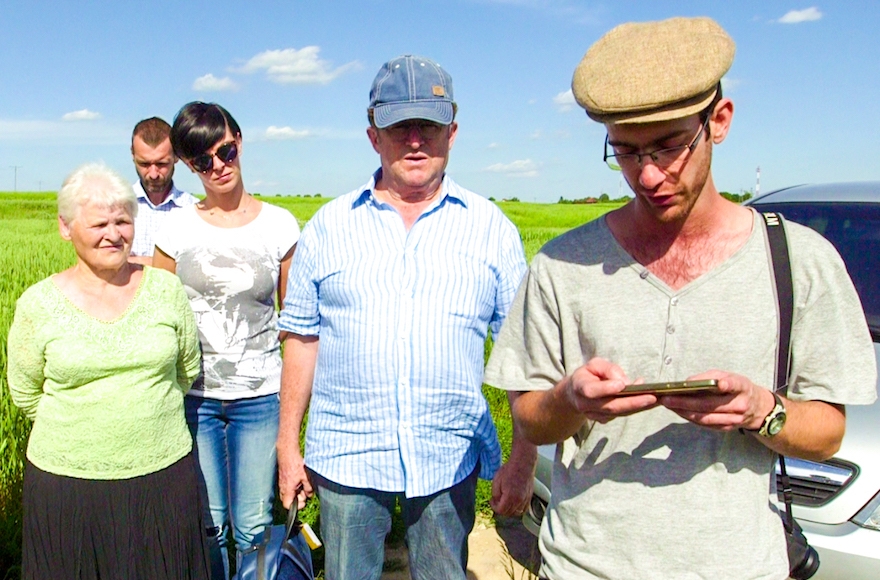 Amit Hirsch, right, saying a mourning prayer in June 2017 at what used to be the Jewish cemetery in Turobin, Poland. (Courtesy of Lea Hirsch)
Advertisement

(JTA) — Josef Kopf survived Sobibor by killing a guard and staging the first successful escape from that death camp in Poland, where the Nazis murdered 250,000 Jews.

But Kopf, whose unlikely escape in 1943 preceded by several months a full-scale uprising at Sobibor, did not live to see Nazi Germany’s defeat.

After the liberation in 1944, he returned to his hometown of Turobin to reclaim some possessions — and was never seen or heard from again.

“We always assumed Josef was killed by a local, but we never knew for sure. We never even knew where he was buried,” said Lea Hirsch, Kopf’s niece from Israel. Her mother, Genia, and Josef Kopf were the only ones from their family of eight children who survived the Nazi death machine.

Last year, though, the 75-year-old mystery was partially solved. A long-forgotten testimony led Hirsch and other relatives to Kopf’s presumed burial place, launching them into a murder investigation whose specifics lie at the heart of the debate in Poland about local complicity and resistance during the Holocaust.

The testimony that triggered the investigation was on an old recording of Genia Kopf, who passed away in 2011. She hardly ever spoke about the Holocaust to her children, Lea Hirsch said. But in the recording, which the family only recently discovered, Genia recounted in detail the last time she saw her brother alive and the story of her own rescue by her non-Jewish neighbor.

According to Genia’s testimony, Josef Kopf found her at the home of her rescuer, Antek Teklak, just days after the Red Army liberated Turobin and eastern Poland. But the siblings’ reunion was short lived, she said. Josef Kopf told Genia and Teklak that he would return to Turobin to “work out” some business that he had had before the war with a friend, whom he did not name.

Teklak warned Josef Kopf not to go, saying he would not make it out of his hometown alive. Trusting Teklak, Genia Kopf begged her brother to stay. But Josef Kopf “just laughed and said he’d be back the next day,” his sister said in the recording of their last meeting. 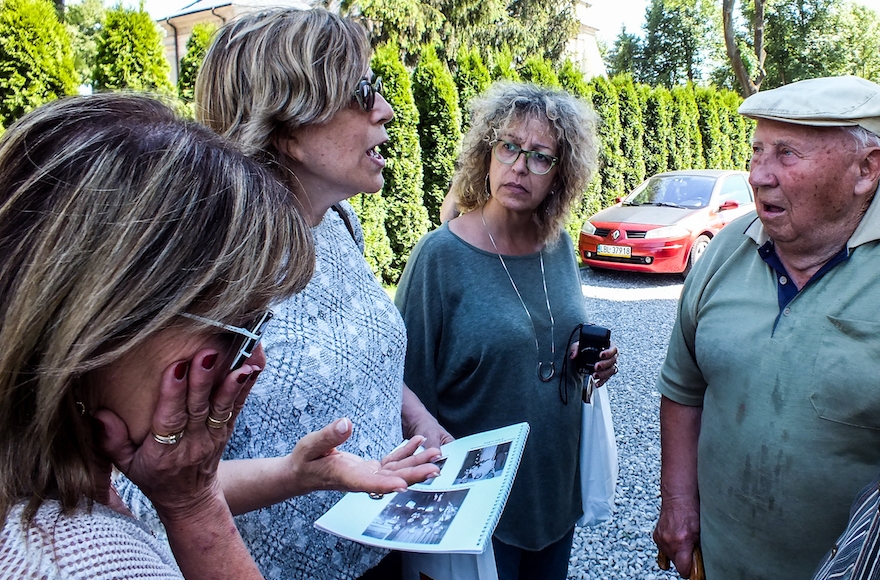 Lea Hirsch, left, in eastern Poland meets a man who knew her uncle before he was murdered in 1944, June 2017. (Courtesy of Lea Hirsch)

This information last year led Lea Hirsch and her son, Amit, to Poland with a dual mission: Locate the Teklak family to honor his bravery and find Josef Kopf’s grave and killer.

“Something in me just woke up, an unstoppable drive to find out what happened,” said Lea Hirsch, a 65-year-old marketing and sales professional and mother of three children from the Haifa area.

In Poland, she and other relatives hired an interpreter and a cameraman. Within a couple of days, witnesses told Hirsch that a former partner of Kopf had killed him, and that a friend of Kopf buried his body in a wheat field in a town near Turobin.

The witnesses provided partial information, claiming not to know who killed Kopf. But they led the family to the field where they say Kopf was buried. The family is raising funds for an exhumation with the intention of bringing Josef Kopf’s remains to Israel for burial. They will be returning for further interviews in July with the hope of finding out who killed him.

“We don’t have a lot of time because the witnesses are old, but it’s a gradual process,” Lea Hirsch said of her talks with Polish villagers in the area. “People have to open up; if we rush it they’ll clam up. A bottle of vodka here, a conversation there — you have to pave their path to the truth.”

For Hirsch, uncovering the identity of her uncle’s killer is secondary in significance to finding the place where he is said to have been buried.

Reconnecting with the descendants of her mother’s rescuers also was important to Lea Hirsch and her family, she said. Risking a summary execution of his entire family, Teklak hid Genia for two years in what she described in the recording as “a hole in the ground.” Teklak took her in after she escaped the ghetto where the rest of her family was kept before they were murdered. 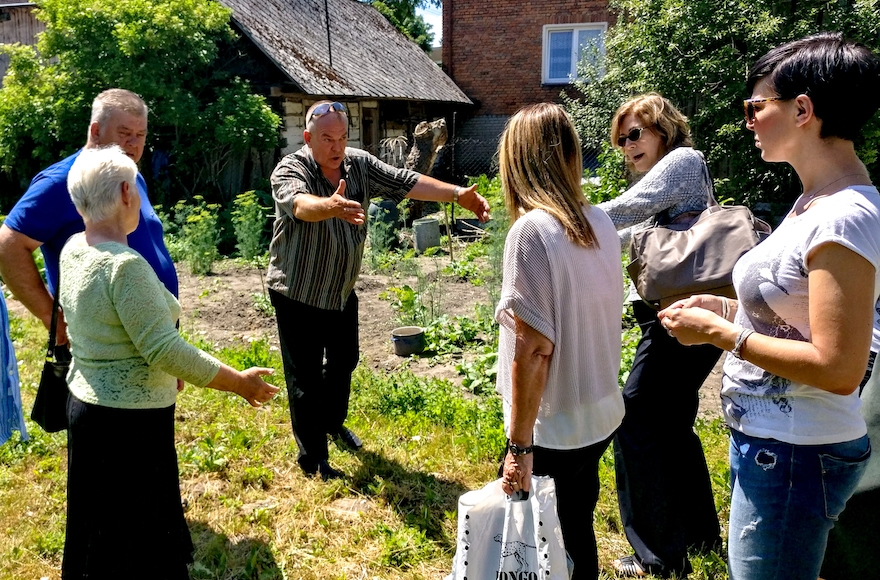 Totko Teklak, gesturing, shows a visitor from Israel where his father hid her mother during the Holocaust in eastern Poland, June 2017. (Courtesy of Lea Hirsch)

Teklak’s son, Totko, and his family met Hirsch, her son and other relatives in Turobin in an encounter last year that Hirsch said was “extremely emotional.”

Her mother’s rescue and uncle’s murder left Hirsch with “mixed feeling” about the polarizing debate gripping Polish society in recent months about the behavior of the Polish people during the Holocaust. Thousands of Jews died at the hands of non-Jewish Poles; thousands more were rescued by them.

In January, Poland’s parliament passed a law that criminalizes blaming the Polish nation for Nazi crimes. The measure triggered a diplomatic crisis with Israel amid criticism by the Jewish state and many Jewish organizations that it risked silencing public debate and research about the Holocaust. And the debate also unleashed a wave of anti-Semitic rhetoric.

“I have an undying appreciation for the people who saved my mother,” Hirsch said. “I was shocked to stand on the ground under which a non-Jewish hero kept her alive for years.”

But Hirsch also has “tremendous anger” over the murder of her uncle, who “survived the hell of Sobibor only to be killed and dumped at an unmarked grave because he was just a Jew.” Like many descendants of Holocaust survivors, Hirsch said grew up in a very small family.

“I could have had an uncle,” she said.

Amit Hirsch, Lea’s son, said his family history reflects “the complexity of the historical record on the Holocaust in Poland.” Poland has 6,706 Righteous Among the Nations – non-Jews who were recognized by Israel as having risked their lives to save Jews from the Holocaust. And while this is the highest number of righteous in any nation, “there was also betrayal and deadly pogroms and anti-Semites,” Amit Hirsch said.

He said the law on rhetoric about the Holocaust in Poland is designed to “manipulate history so that only the rescue stories are heard.”

Rescue stories “indeed need to be heard,” Amit Hirsch said, “but alongside the terrible things that happened.”