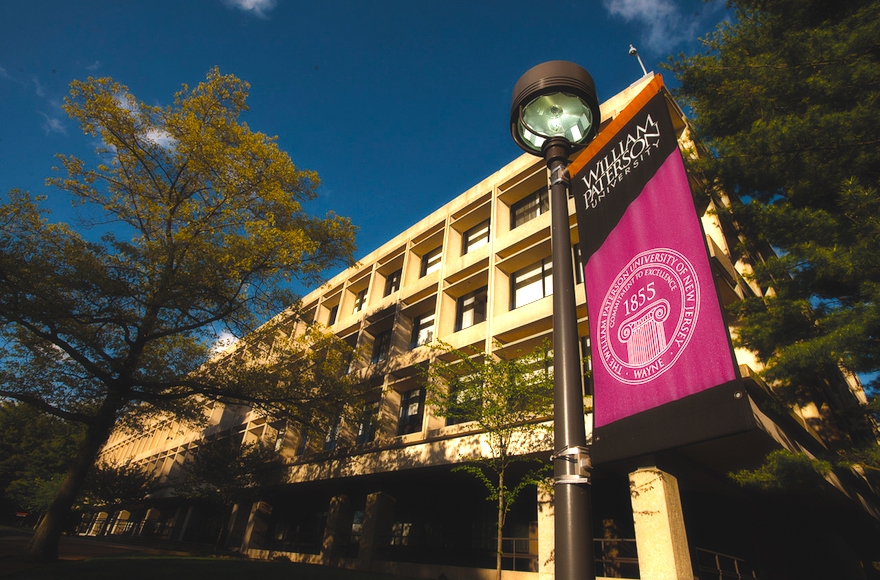 TEANECK, N.J. (The Jewish Standard via JTA) — A sociology professor at William Paterson University of New Jersey in Wayne has been recorded on video espousing a series of anti-Semitic beliefs about Jews. They include the ideas that Ashkenazi Jews are not genetically related to the ancient Israelites; that 175,000 German Jews found safe harbor in the German army during the Holocaust; and that Judaism has degenerated from a universal religion, with roots in ancient Egypt, to a racist religion.

It is not the first time Magarelli has stirred controversy in the classroom.

Last year, another student complained to the department head and filed a formal complaint with the school.

And in 1994, Magarelli was rebuked by his department after handing students a document that downplayed the number of deaths in Nazi concentration camps. According to the Feb. 7, 1994 issue of the Beacon, the school’s newspaper, Magarelli’s handout said: “In relationship to the media theme of six million concentration camp deaths … a figure of between 700,000 and 800,000 appears more realistic.”

The exposure of Magarelli’s comments in the classroom comes as Jewish groups have criticized Rutgers University — like William Paterson a New Jersey state university — for continuing to employ two professors who made anti-Semitic and anti-Israel remarks, as well as social media postings outside the classroom.

At William Paterson, Koval complained to Jacob Felson, the chair of the sociology department, who urged her to file an official complaint. But after learning that a complaint filed last year had no effect, Koval decided to wait until the course was over before expressing her concerns and posting videos publicly on Twitter over the weekend.

According to Koval, and as verified by the videos she recorded, Magarelli’s traffic in alternative facts is not limited to discussions of Jews. Magarelli tells his students that the moon landings were faked, and that human space travel beyond the Van Allen radiation belts is impossible. (In the real world, this fear was debunked when the radiation was first directly measured in the 1960s, living on mostly as a key plot point in the Fantastic Four comic books.) 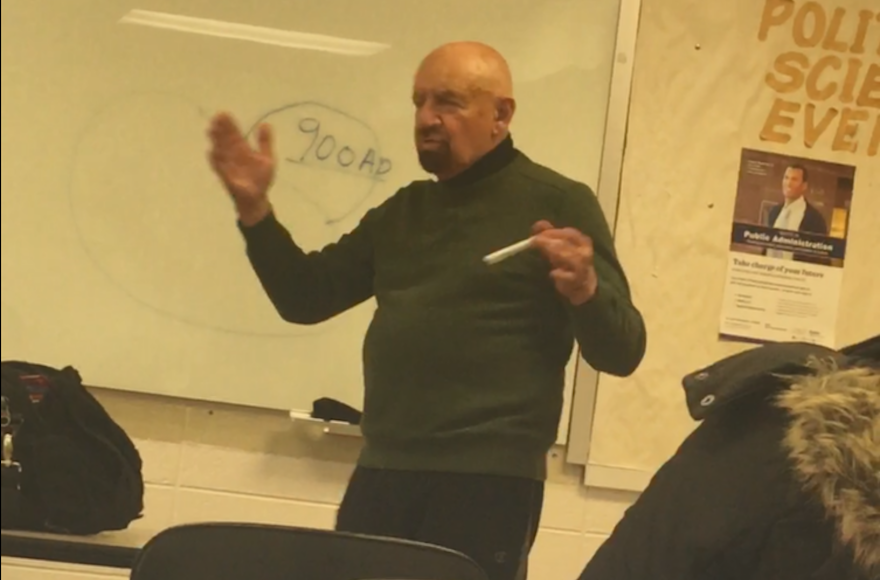 Clyde Magarelli, a sociology professor at William Paterson University, was once rebuked by his department after handing students a document that downplayed the number of deaths in Nazi concentration camps. (Twitter)

Magarelli’s unorthodox beliefs extend to his politics. According to campaign donation records at opensecrets.org, Magarelli has been donating to the Lyndon LaRouche Political Action Committee since at least 2010. In 1979, Lyndon LaRouche lost a $26 million libel suit against the Anti-Defamation League, which had declared LaRouche “anti-Semitic.” The New York state Supreme Court ruled that it was reasonable to apply that label.

LaRouche, who ran for president several times, has long trafficked in conspiracy theories, some centering on the queen of England. Many of those theories have anti-Semitic overtones.

None of the videos of Magarelli that Koval recorded include full-fledged Holocaust denial. But the snippets, which she recorded because they seemed bizarre, reflect the beliefs of Holocaust deniers.

In one video, Magarelli explains that German Jews found safety in the German army during the Holocaust.

“One hundred and seventy five thousand German Jews served in the German army — this is not the SS — the Germany army — in World War II and occupied positions from private up to field marshal, the highest ranks. Now the leader of that himself was a Jew,” he said.

Magarelli, who has a doctorate from SUNY Binghamton, did not respond to requests for comment.

Michael Berenbaum, a professor of the Holocaust at the American Jewish University in Los Angeles, rebutted Magarelli’s assertion.

“What he may be saying is that there were some mischlinge (mongrels, partial Jews) who served in the German army. There were hundreds, not 175,000,” he said. “My student and friend Bryan Rigg can probably name them. He wrote an important book with an unfortunate title ‘Hitler’s Jewish Soldiers’ detailing the mischlinge who served in then Wehrmacht. But the number is 1 percent at best of what the professor quotes.”

Magarelli “knows not of what he speaks,” Berenbaum said. “He should know better.”

In another video, Magarelli asserts that Ashkenazi Jews “have no biological links to the original Judaism. They claim to have it, though there’s no link at all. DNA follows that.”

In fact, however, as Science magazine wrote in 2012, “three of the major Jewish groups — the Middle Eastern, Sephardic, and Ashkenazi Jews — share a genetic connection going back more than 2,000 years, and are more closely related to each other than to nearby non-Jewish groups.”

Felson, the department chair, said he is glad that Koval is speaking out.

“That’s important,” he said. “I encourage students to speak up when they have a problem in the classroom. There are not enough students speaking up. On some campuses there would have been a lot more discussion and debate about something like this much earlier.”

Magarelli has been teaching at William Paterson for more than 50 years, Felson said.

“He was probably tenured when I was in elementary school,” he said.

“Unfortunately, particularly post tenure, the only kind of thing that can be done is when there are multiple complaints from students. It’s unfortunate that, partly out of apathy or just ignorance, not many students have complained. Professors are given a wide latitude in what they teach in their classes. If they have some wild and erroneous things thrown in, it’s very difficult for the department chair to do much about it.”

The student who filed a complaint last year declined to speak to the Standard, citing a confidentiality agreement she signed with the university. She also declined to use her name.

Talia Mizikovsky, the director of Hillel of Northern New Jersey, said that she had encouraged the student to file a complaint, and followed up with a meeting with the university administration to express her concerns over “the anti-Semitic and racist comments” in the student’s account of Magarelli’s classroom.

Eventually the student received a response from the dean who had investigated the issue.

“I found that Professor Magarelli’s statements would likely be protected under the First Amendment and viewed as generating a healthy classroom discussion/debate,” the response said. “I did, however, find that Professor Magarelli (and consequently his students), would benefit from a discussion to determine whether he was improperly veering off the topic[s] of his Criminal Investigations syllabus/outline. I was advised that a discussion was had between Professor Magarelli and the Sociology Department Chair. He was generally notified (no student name was mentioned) about complaints regarding some of his statements made during class. The Department Chair also counseled Professor Magarelli about the dangers of veering off the topic/subject matter while teaching his courses.”

The dean concluded that “if Professor Magarelli (or any other professor for that matter) engages in behavior or makes statements that are deemed discriminatory in nature (as opposed to protected under academic freedom), the University will (and has as recently as this school year) act accordingly to take action against that professor.”

A call to the dean of the college of humanities and social sciences was returned by the William Paterson press office.

“We are aware of the student’s social media posts and have reached out to encourage her to use official university channels to voice her complaint,” Mary Beth Zeman, the university director of public relations, wrote in an email. “The university policy is to investigate individually each student’s complaint and then determine what action may be warranted.

“Sometimes disciplinary action is taken against a professor. When that occurs, it is a private matter between the university and an individual faculty member.”

Ari Cohn, who works at the Foundation for Individual Rights in Education and regularly defends college faculty members’ First Amendment rights, said the William Paterson faculty would have ample grounds to sanction Magarelli for trafficking in disproven conspiracy theories.

“Professors do not lose the right to participate in public conversation simply by virtue of their government employment,” Cohn said. “The First Amendment generally forbids retaliating against that.” But “classroom speech is a different situation.”

“One issue that comes up is when someone says something unpopular,” Cohn said. “The question then is, can the teacher who said X fairly treat students of category Y. It’s often brought up when a faculty member says something and people just imply that he will treat someone from that group unfairly.

“If a faculty member opposes same-sex marriage, is it automatically true that he can’t treat gay students fairly? Universities must be circumspect in imputing discrimination based on views. In the absence of complaints, we have to be skeptical about accepting that logic.”

On the other hand, he said, “If he’s not teaching the material they’re supposed to be teaching, the university certainly has the right to step in. If what he was saying was germane to course content, you get into the question of competency. If a history professor were teaching that the South won the Civil War, there’s a competency issue.”

That said, “It’s imperative those decisions be left to the faculty,” Cohn said. “It’s reasonable for a faculty member to be concerned and want to figure out what’s going on. When faculty members see their colleagues are unfit, they tend to take action.”

Perhaps. Student comments describing Magarelli as a “paranoid conspiracy theorist” who talks about 9/11 being “an inside job” are found on RateMyProfessors.com as long ago as May 2004. A more recent review warned, “This man will not teach you anything but conspiracies without any backup evidence to support what he says!”

Benny Koval, however, did not think to check out Magarelli before enrolling in his class.

“I looked on RateMyProfessor after I had already chosen the course,” she said. “Which was a mistake.”