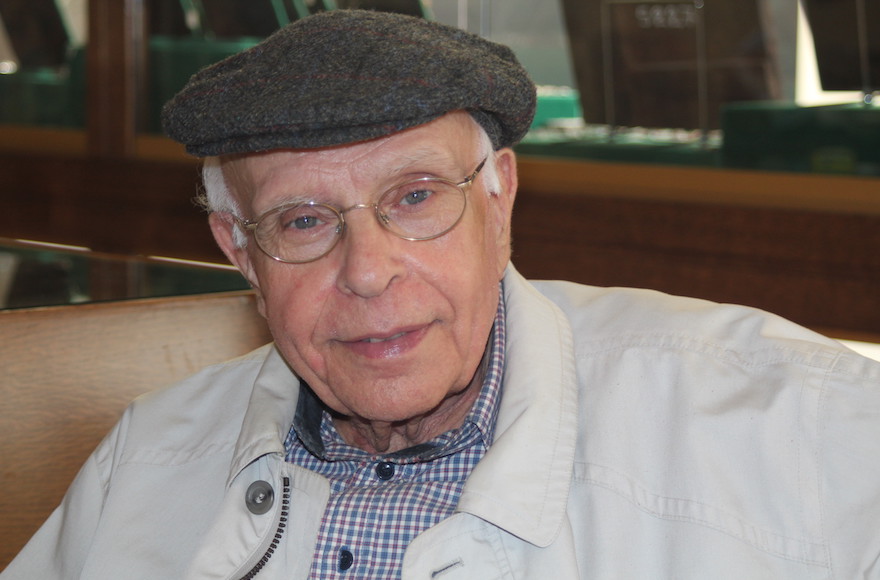 HANIA, Crete (JTA) — On Sunday, 263 candles will be lit at a special interfaith memorial service at this lovely city’s historic Etz Hayyim Synagogue. The names of local Jews who perished during the Holocaust will be read before a delegation that is expected to include Chief Rabbi Gabriel Negrin of Athens, Greek Orthodox and Catholic clergy, and ambassadors from Italy, Germany and Israel.

One person who wanted to be here will be missing. His name is Kostas Papadopoulos, who may be the last surviving link to a proud 2,300-year Jewish lineage and the tragic military decision that virtually eliminated one of Europe’s oldest Jewish communities.

His story dates back to May 29, 1944, when he was just 2 years old. On that day, German secret police singled out and rounded up 263 people across Greece’s largest island. All were arrested and carted off to Agia Prison for the crime of being Jewish.

Eleven days later they were forced at gunpoint into the hold of a Greek merchant vessel, the Tanais, set to sail for Piraeus.

“A higher proportion of the Jewish community of Crete was deported by the Nazis toward a death camp than of any country in Europe,” said Rabbi Nicholas de Lange, a professor emeritus of Hebrew and Jewish studies at the University of Cambridge who conducts High Holiday services here.

None of the prisoners would make it to Piraeus and a train bound for Auschwitz. When the ship left Heraklion as part of an announced “civilian” convoy, a British submarine captain, certain that the Tanais was piloted by a German military crew, targeted it near Santorini. Unaware of the human cargo below deck, which also included Christian Greek and Italian prisoners of wars, he ordered the crew to blow up the ship.

A direct hit with two torpedoes killed nearly everyone on board. The sole survivors were half a dozen Cretan Jews who escaped the Germans in May 1944 by hiding with Christian families.

Papadopoulos is the last of the survivors still living, Jewish historians working at Etz Hayyim believe. 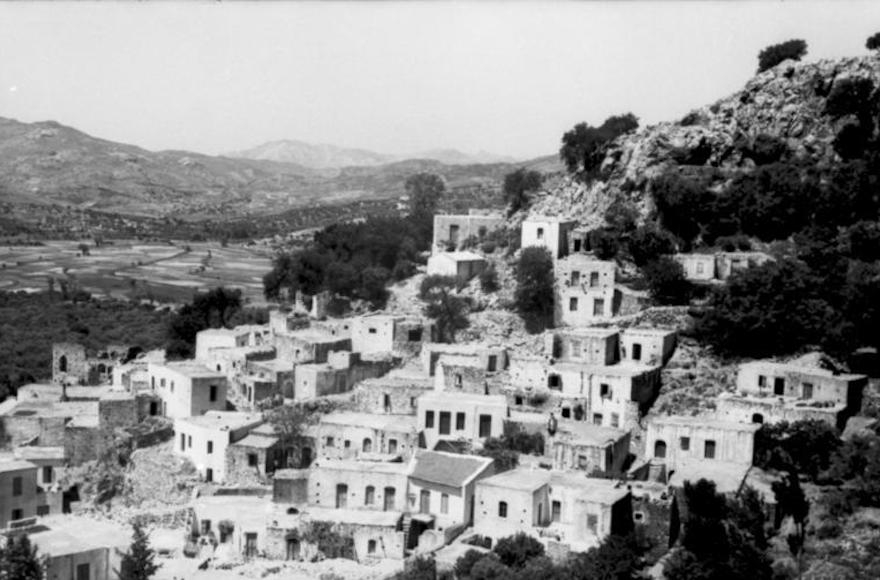 A view of the southern coast of Crete in June 1943. (German Federal Archive/Wikimedia Commons)

I recently met him in Heraklion, Crete’s largest city, after a short drive from the ship that brought me to Crete from Piraeus. My overnight journey crossed the same waters where the Tanais and its hundreds of victims remain entombed. Papadopoulos, a dealer and appraiser of fine Christian art, spoke at Daedalou Gallery, his elegant shop in the heart of an upscale shopping neighborhood where tourists love to haggle.

His survival traces back to his Jewish mother Xanthippe’s decision to marry a Christian during the German occupation. After Papadopoulos was born in 1942, his Christian father moved to Athens, leaving his young son with his mother and grandmother. In 1944, when it became clear that the Nazi roundup was imminent, the three of them moved into hiding with a Greek farm family outside Heraklion.

“My mother knew the Nazis were coming,” Papadopoulos said. “Fortunately my family name was Greek, which helped us escape the Germans. It also made it easier to find a family willing to take the risk of hiding us.

“Some of the Greeks who heroically hid Jews were executed as collaborators, but fortunately that was not the fate of the family that protected us. They even returned special paintings we had given them to hide.”

For Papadopoulos, who grew up in Greece and learned his trade as an auction house apprentice in Europe and New York, returning to Crete in the 1970s was not a quick or easy decision.

“People who do what I do, selling religious art, live in places like New York or Switzerland,” he said. “But I wanted to be close to my friends, the people I grew up with.”

One of the challenges that comes with operating a first class gallery in a place like Hania is the flood of bargain hunters arriving by plane and ship, many of them Germans.

“Customers are used to looking at knockoffs. When they see real art, some believe the prices are too high,” he said.

After cultivating his reputation as an art and antiquities appraiser, Papadopoulos has little patience for customers who try to talk him down on valuable icons and jewelry.

Several years ago, when a towering Chinese tourist made a ridiculous offer of 10 euros for a valuable icon worth far more, Papadopoulos stood his ground. The angry customer knocked him down. The art dealer is still recovering from the attack, saying it has limited his mobility and made it impossible for him to return to Hania, two hours away, for this week’s memorial.

While Heraklion’s defunct synagogue was destroyed by the Germans at the beginning of the Battle of Crete in May 1941, Papadopoulos has eagerly connected with Etz Hayyim in Hania. 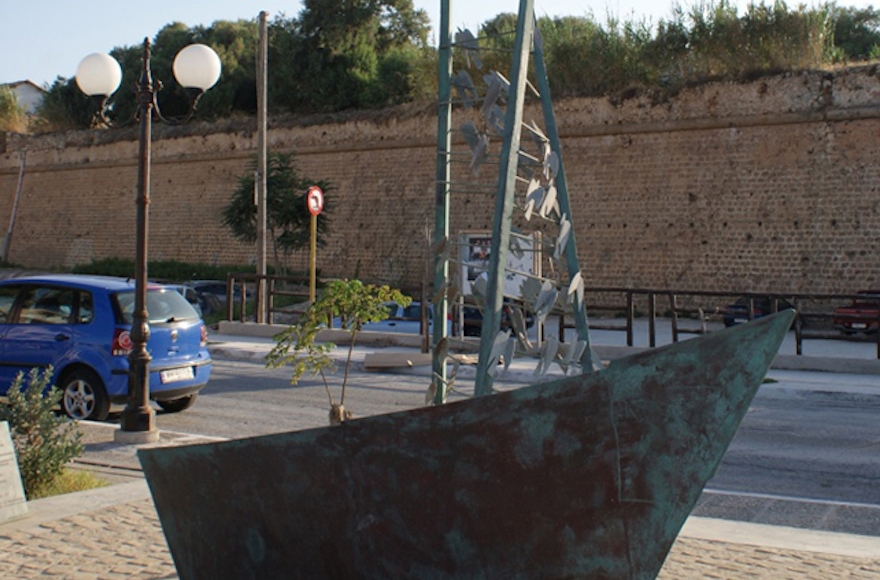 A view of the Crete Holocaust memorial on the harbor of Hania. (Etz Hayyim Synagogue)

The historic sanctuary was looted by the Nazis and fell into disrepair following the Holocaust. Years after graves were robbed and the synagogue site became a local dump, an international effort led to its rebuilding under the leadership of the late Nikos Stavroulakis, former head of Athens’ Jewish Museum of Greece.

The reconstruction, completed in 1999, was largely the work of a Muslim and Christian crew from Albania. Rededication led to the creation of a havurah, an interfaith community including Jews, Christians and Muslims enthusiastic about Stavroulakis’ work and inclusive approach. He defined Etz Hayyim as a “place of prayer, recollection and reconciliation,” making it open to everyone, in the tradition of Hellenistic synagogues.

This fraternity shares common values of Abraham despite their different religious affiliations. Even a pair of 2010 arson attacks that destroyed many important records failed to slow down the rebirth of this interfaith community supported by donations from around the world.

Anja Zuckmantel, the synagogue administrator at the heart of this week’s event memorializing the 263 Tanais victims, moved here from Germany 10 years ago.

“Our congregation grows in part because so many Jewish tourists want to come and see what we have done,” she said. “At our summer Kabbalat Shabbat services, we have services with up to 60 participants. The number of Jews settling in Crete is slowly but steadily growing as Crete is a beautiful place to live.”

Kostas Papadopoulos may not make it to Hania for the annual Tanais memorial service, but he’ll be there in spirit.

Items on just one table at his Daedalou Gallery are not for sale. It is covered with Judaica, including a menorah, Torah pointers, a samovar and other heirlooms.

(Roger Rapoport is the producer of the feature films “Waterwalk” and “Pilot Error” and the forthcoming “Coming Up For Air.” Contact him at rogerdrapoport@me.com)