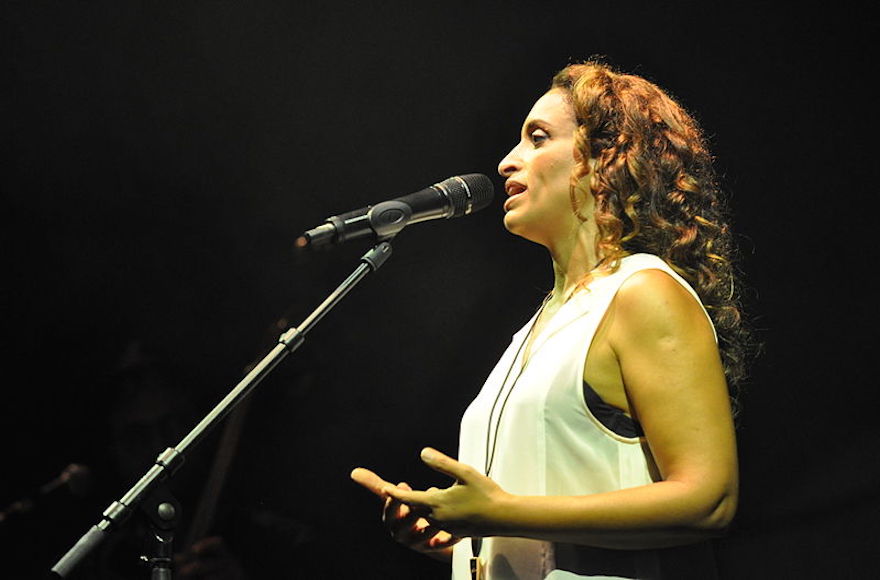 BUENOS AIRES, Argentina (JTA) — Israeli singer and peace activist Achinoam Nini called for Eurovision to be held in Tel Aviv during a visit to Argentina. The singer, who is known as Noa, performed two concerts in Buenos Aires for hundreds of people to celebrate Israel’s 70th birthday.

“That’s good news, Israel is 70, so well. Israel is so cool, has so many achievements, went so far. I love Israel,” said Noa, who came to Buenos Aires on an invitation from Zamir, an organization for Jewish music in Argentina that organized the third Latin American gathering of Jewish music.

“Even when it drives me crazy, I love it, I love my country, I want to hug my country all the time,” she said and hugged herself.

The singer for years has been outspoken about her dovish and left-wing views. In 2017 she performed at a Tel Aviv rally in favor of the two-state solution.

After the concert at the Amijai temple and community center, she told JTA that she thinks that Israel will achieve the goal of living in peace with its Arab neighborhoods and said “I’m trying to spread a positive message about Israel, I believe in peace, that’s my motto. I think Israel’s name must be associated with peace, so I’m doing that.”

Asked about where in Israel the Eurovision song contest should be held, Noa, who represented Israel at the 2009 Eurovision in a duet with Israeli-Arab singer Mira Awad, responded: “Tel Aviv. Because it is a city of life, joy, happiness. It’s not political, it’s not contentious. It’s where Eurovision should be. Eurovision is a party, not politics, so it should be in Tel Aviv.” She said later that “when there is peace we can hold Eurovision in Jerusalem.”

Israel will host Eurovision in 2019 following its victory this year by Netta Barzilai, and having Jerusalem as the potential site has sparked some controversy. Noa said she is a great fan of Barzilai.

Noa also told JTA that she is “very against” President Donald Trump’s decision to move the U.S. Embassy to Jerusalem, saying it will incite “more violence, more hatred. Jerusalem must be the capital of Israel and the capital of Palestine, but most importantly the capital of peace for the entire world.”

During the temple concert she spoke in English, Hebrew and Spanish, revealing that she discovered her love of music during her childhood in New York at a yeshiva due to her Argentine music teacher, Avshalom Katz.