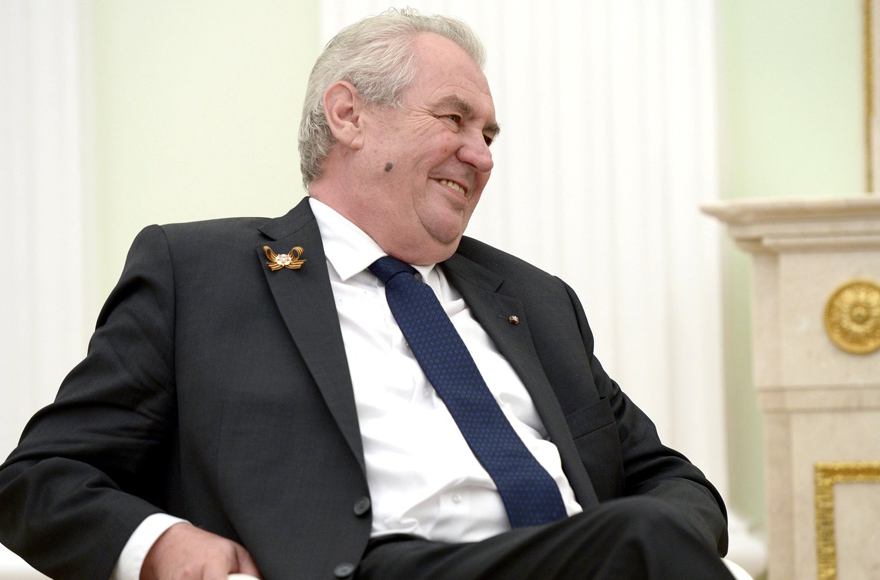 President of the Czech Republic Milos Zeman in Moscow in 2015. (The Kremlin)
Advertisement

(JTA) — Czech President Milos Zeman joked –presumably — that Israeli Prime Minister Benjamin Netanyahu offered to give up his own home in Jerusalem if the Czech Republic opened an embassy there.

Zeman spoke last week at a gala of the American Israel Public Affairs Committee, or AIPAC, in Prague, the capital of the Czech Republic.

Zeman, a staunch supporter of Israel, supports moving his country’s embassy to Jerusalem from Tel Aviv.

The Czech Foreign Ministry, which is under the authority of the Czech prime minister, not the president, has said the embassy will stay put for now. Zeman has called this “cowardice.”

He added during his speech at the AIPAC dinner, “I’m afraid that only 10 percent of the total population is brave, maybe less. That’s why I like Israel. Let me end with one sentence from an old Jewish prayer: Next year in Jerusalem!”

He praised President Donald Trump for initiating in December the move of the U.S. Embassy to the Israeli capital. Zeman said he had supported moving the Czech Embassy years ago, according to a transcription of his speech that was posted this week on the official website of the Czech presidency.

“That’s not all, Bibi Netanyahu told me: ‘If you do [the same], I will give you my own house for your embassy,’” Zeman said, adding: “I strongly hope that the offer is still valid because it could greatly reduce the cost of this relocation.”

The European Union, of which the Czech Republic is a member, opposes the U.S. Embassy’s move to Jerusalem, which Brussels says should occur only after the conclusion of a peace deal with the Palestinian Authority. It also claims East Jerusalem as the capital for a future Palestinian state. Netanyahu has called on other nations to follow the example of the United States; only Guatemala and Paraguay have followed suit.

The Czech acting prime minister, Andrej Babis, in April said his country will open an honorary consulate in Jerusalem, but Zeman later said that consulate’s opening is part of an open-ended effort that will end with the relocation of the Czech Embassy to Jerusalem.

Also during the AIPAC gala, Moshe Kantor, the president of the European Jewish Congress, presented Zeman with a piece of a monument that was inaugurated earlier this month at Terezin, the site of a former Nazi concentration camp. The new monument features a massive rock suspended over the ground by a circular brace.

“The nature of the stone is meant to capture the eternity of grief and its immensity the magnitude of the burden of the Jewish people,” Kantor said at the inauguration ceremony June 4. He also said the monument is to serve as a “reminder of the lessons of the Holocaust” amid rising levels of anti-Semitic violence in Europe.