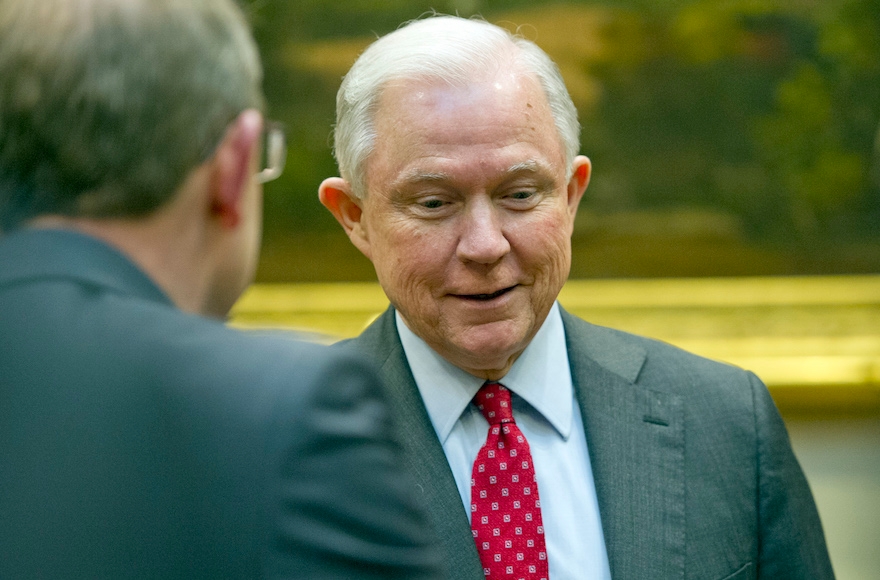 Attorney General Jeff Sessions with members of the Fraternal Order of Police in the Roosevelt Room at the White House, March 28, 2017.(Ron Sach/Pool/Getty Images)
Advertisement

“In Nazi Germany, they were keeping the Jews from leaving the country,” Sessions said Monday night on Fox News’ “The Ingraham Angle,” adding “but this is a serious matter.”

“We need to think it through, be rational and thoughtful about it. We want to allow asylum for people who qualify for it, but people who want economic migration for their personal financial benefit and what they think is their family’s benefit is not a basis for a claim of asylum.”

Comparisons to Nazi Germany and the Holocaust have been rife in the days since the government’s zero-tolerance policy was reported, and reports from the detention centers have been aired showing children inside chain-link cages and crying for their parents.

Sessions said the children who are being separated from their illegal migrant parents at the border under the zero-tolerance policy are not being mistreated and are living in good conditions in immigrant detention centers.

Reports surfaced last week that U.S. border patrol officers told parents that they were taking their children away for a bath and then not bringing them back, which is similar to Jews being told in the Holocaust that they were going to shower but instead were taken to gas chambers and their death, lending itself to such comparisons.