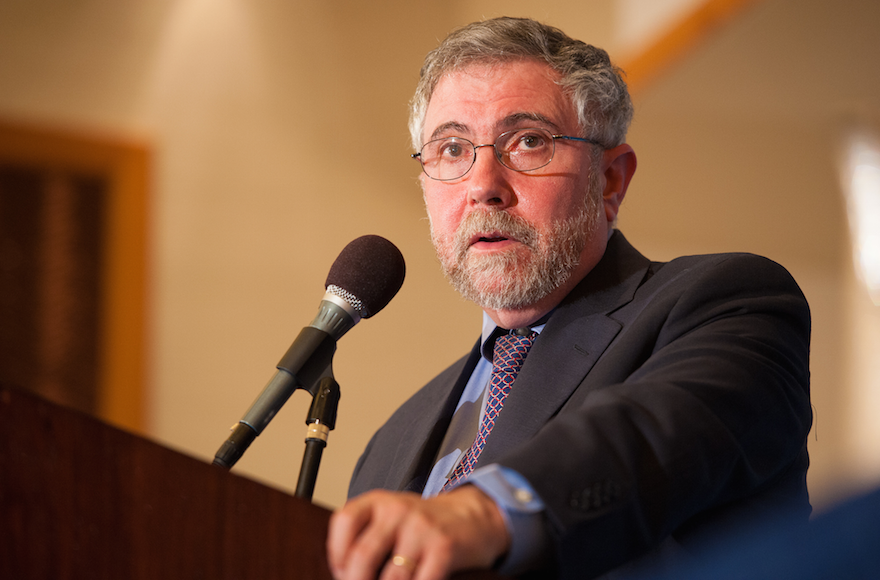 (JTA) — Lots of people have been comparing the U.S. government’s policy of separating migrant families to the Holocaust.

But Paul Krugman, the liberal’s liberal economics columnist at The New York Times, has a different Jewish historical analogy: He says the administration’s rhetoric on immigration is like the age-old blood libel against the Jewish people.

The blood libel is an ancient, recurring smear against Jews falsely accusing them of killing Christian children and using their blood for ritual purposes (like drinking it or baking it into matzah for Passover). The libel has shown up throughout the centuries across Europe, parts of the Middle East and even in the United States.

Krugman says the false, fantastical nature of the blood libel is much like the accusations that Trump and his allies throw at immigrants: that droves of them they take American jobs, commit a disproportionate amount of crimes and kill native-born Americans.

Krugman cites statistics showing that the opposite is true: Immigration rates are not spiking. Crime rates are lower in areas with a large number of immigrants. And most economists don’t believe immigrants depress wages for low-income, uneducated Americans.

“I don’t know what drives such people — but we’ve seen this movie before, in the history of anti-Semitism,” Krugman wrote. “The thing about anti-Semitism is that it was never about anything Jews actually did. It was always about lurid myths, often based on deliberate fabrications, that were systematically spread to engender hatred.

“In any case, the important thing to understand is that the atrocities our nation is now committing at the border don’t represent an overreaction or poorly implemented response to some actual problem that needs solving. There is no immigration crisis; there is no crisis of immigrant crime. No, the real crisis is an upsurge in hatred — unreasoning hatred that bears no relationship to anything the victims have done.”

Some bristled at Krugman’s analogy.

“Krugman, don’t play around with Jewish anti-Semitism and the Holocaust for you own non-parallel political needs,” tweeted Yisrael Medad, a pro-settlements activist in Israel.

According to at least one expert on anti-Semitism, however, Krugman’s comparison holds water.

Deborah Lipstadt, the prominent Holocaust historian, told JTA that Krugman is right to note that anti-Semitism and modern American xenophobia share a basis in irrationality.

“It’s a conspiracy theory,” she said of the blood libel. “It makes no sense. It sees Jews as the heart of the problem, just like today crime is down, immigrants are taking jobs that by and large Americans don’t want, but there’s this myth of ‘immigrants are taking our jobs.’ … There’s an irrational element to it and a lack of logic.”

Lipstadt has no such sympathy for the comparisons of family separation to the Holocaust, an argument she made in an Atlantic piece published Friday titled, bluntly, “It’s not the Holocaust.”

“But something can be horrific without being a genocide or a Holocaust,” she wrote. “Defenders of the Trump policy self-righteously pounced on the comparison, denouncing it as hyperbolic. Although there is nothing good that can be said about Trump’s family-separation policy, it is not a genocide. Equating the two is not only historically wrong, it is also strategically wrong. Glib comparisons to the Nazis provide the administration and its supporters with a chance to defend their position, something they do not deserve.”