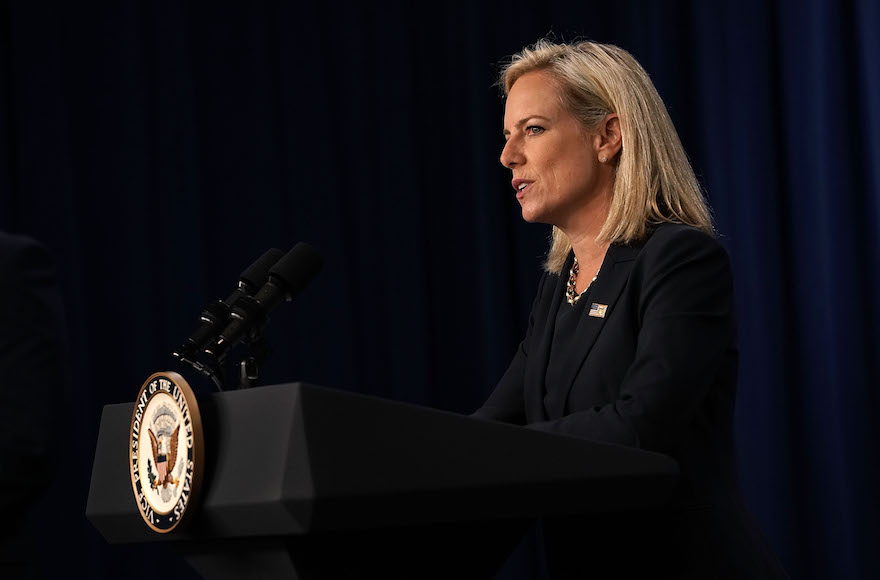 WASHINGTON (JTA) — A former congresswoman cited a 1980 refugee law she helped pass “against the background of the Holocaust” in quitting an advisory council to the Department of Homeland Security, citing President Donald Trump’s refugee policies.

Elizabeth Holtzman, a Democrat who represented central Brooklyn from 1973 to 1981, was among four members of the council who stepped down.

“Under your administration and that of Donald Trump’s, DHS has been turned into an agency that is making war on immigrants and refugees,” Elizabeth Holtzman said in a letter last week to the department’s secretary, Kirstjen Nielsen, that was made public Tuesday on liberal media websites.

“Seizing children from their parents in violation of the constitutional rights of both is bad enough (mentally harmful to the children and infinitely painful to both the parents and children), but doing so without creating proper records to enable family reunification shows utter depravity on the part of the government officials involved,” Holtzman wrote.

Holtzman cited her own role in Congress in passing the 1980 Refugee Act, which was written to reverse the anti-refugee policies that limited intake before and during World War II.

“The Act was adopted against the background of the Holocaust, in which the US took only a tiny handful of refugees from the Nazis, leaving untold numbers to perish at their hands,” she said.

Holtzman,76, is known for her pioneering role as a Jewish feminist and her research into the Nazi era. She helped expose the role of U.S. intelligence agencies in shielding war criminals in hopes of mining them for information.

Also resigning was Richard Danzig, the first Jewish secretary of the Navy, under President Bill Clinton.

“Were we consulted, we would have observed that routinely taking children from migrant parents was morally repugnant, counter-productive and ill-considered,” said a separate letter signed by all four, who also included former Obama administration officials Matthew Olsen and David Martin.

Trump has said he reversed the family separation policy, although hundreds of families have yet to be reunited.

The departures leave the council with 23 members. The Department of Homeland Security supervises the Immigration and Customs Enforcement agency.