Herman Shine, one of the last survivors to have escaped Auschwitz, dies at 95 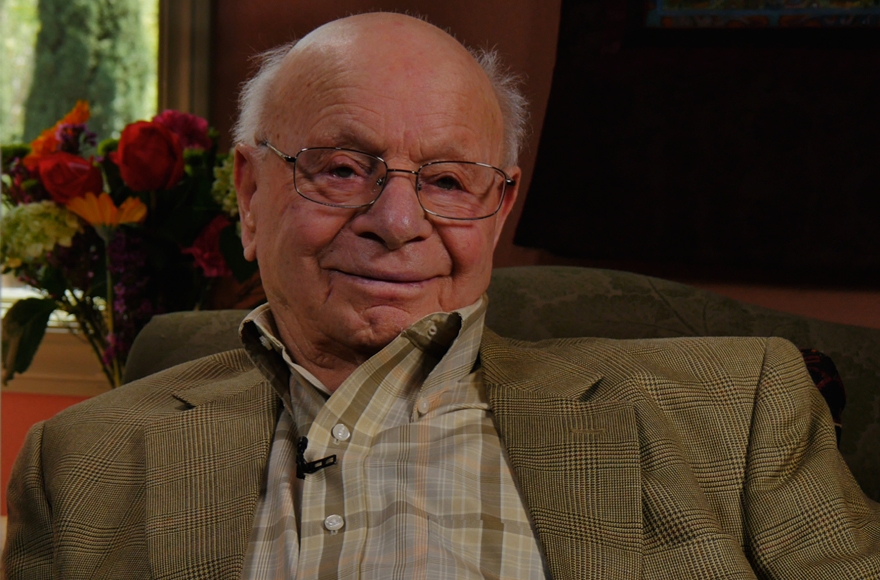 Herman Shine in September 2017 while preparing a message for the 70th Anniversary Observance of the liberation of Sachsenhausen camp. (Courtesy of Oskar Rosenbloom)
Advertisement

(JTA) — Herman Shine, who is believed to be one of the last survivors to have escaped Auschwitz, has died.

Shine, who worked as a roofer at the Nazi death camp before making a daring escape with his good friend Max Drimmer, died on June 23. He was 95.

Fewer than 200 prisoners escaped from Auschwitz.

Shine, born Mendel Scheingesicht in Berlin, was arrested in that German city in 1939 and then deported with 1,700 other Polish Jews to the Sachsenhausen concentration camp. Shine’s father was Polish.

He claimed to be a roofer in order to survive the camp and actually learned how to build roofs. In 1942, Shine was transferred to Auschwitz, where he continued to work as a roofer.

While working at an Auschwitz satellite forced labor camp in the town of Gleiwitz, he met a Jewish girl who worked in the camp and was able to return to her home at night. The girl, Marianne, would later become his wife.

Drimmer came to Shine with an Auschwitz escape plan and, with the help of a Polish partisan, they managed to break out of Auschwitz and hide on his farm for three months. Marianne’s family would hide the two men during the final weeks of the war.

Shine and Drimmer and their wives immigrated to the United States, settling in San Francisco. Shine founded the Standard Roofing Company in 1956 and was a successful businessman until his retirement in 1979. Drimmer, who worked as a plumber and a baker, died in 2012.

A documentary about the men, “Escape from Auschwitz: Portrait of a Friendship,” was released in 2001. It was updated and re-released in 2015 with additional material.

Shine and his wife devoted time to Holocaust education and told their stories to groups throughout the Bay Area.