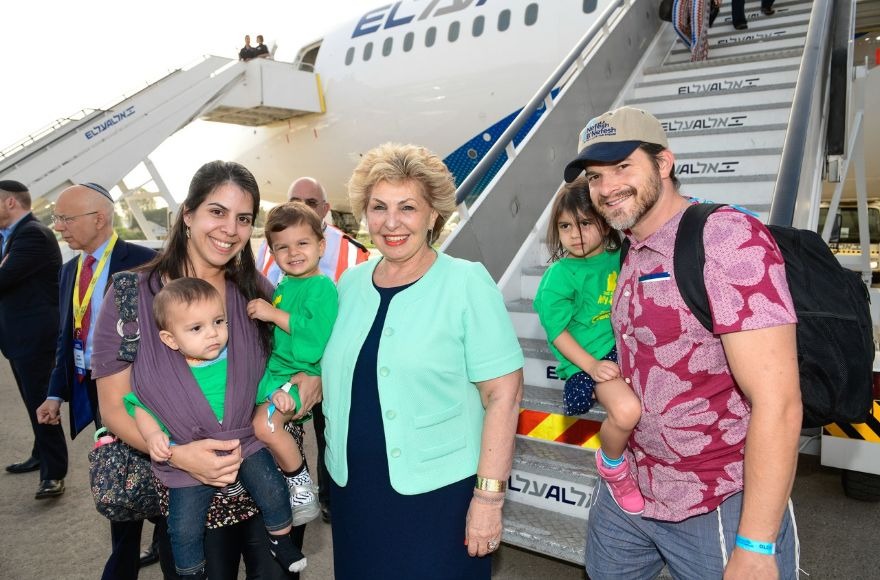 The Leopold family of Las Vegas meets Israel's minister of Aliyah and Integration, Sofa Landver, after arriving in Israel on their aliyah charter flight with Nefesh B'Nefesh. (Photo/Shahar Azran)
Advertisement

JERUSALEM (JTA) — Over 230 new immigrants from North America arrived on a charter flight in Israel, including the daughter of former Sen. Joseph Lieberman and her family.

Hana Lowenstein, her husband and their four young children were on the flight that landed early Wednesday morning at Ben Gurion International Airport near Tel Aviv. The group included 127 children.

A welcoming ceremony was held at the airport.

“Each day that brings new olim to Israel is a joyous occasion, especially when there are 130 children on a single aliyah flight,” said Sofa Landver, Israel’s minister of aliyah and integration. “This is the future unfolding before us.”

She added: “These newcomers, together with the country’s veteran olim, are strengthening Israel’s resilience, economic development and society as a whole.”

The flight carrying new immigrants, olim in Hebrew, from 20 U.S. states and Quebec in Canada was chartered by Nefesh B’Nefesh in cooperation with the Ministry of Aliyah and Integration, The Jewish Agency for Israel, Keren Kayemeth Le’Israel and JNF-USA.

The new immigrants ranged in age from 6 months to 80 years old, and including 34 families, 18 singles, three sets of twins and 15 medical professionals.

Some 600 new immigrants arrived in Israel on Monday and Tuesday from the United States, France, Russia, Argentina, Ukraine and Brazil.